Executive chair of the Sanitation and Water for All Partnership

Catarina de Albuquerque was the first UN Special Rapporteur on the Human Right to Water and Sanitation from 2008 to 2014. She is now Executive Chair of the global partnership Sanitation and Water for All. After having contributed to the recognition of access to water and sanitation as a fundamental human right, she is today concerned about seeing that the most disadvantaged populations are still left behind and that public policies take up this right far too little. For Catarina de Albuquerque there is no doubt: it is impossible to regulate access to water without binding public policies.

Why did access to drinking water only become a human right in 2010?

If the Universal Declaration of Human Rights (UDHR) of 10 December 1948 mentions all rights except the right to water, it is because access to water was taken for granted by the negotiators of the text, who were diplomats from wealthy families in developed countries, where the lack of access to water was not really apparent. At the time, the water crisis was especially blatant in the poorest countries, which were colonies and therefore did not have a seat around the table. Furthermore, civil society organizations, which today influence the debates at the United Nations, were virtually absent from the UDHR negotiations.

It was only in 2005 that Germany and Spain pushed for the opening of discussions on a right to water, even before the creation of the United Nations Human Rights Council. The two countries subsequently proposed the creation of a mandate of Special Rapporteur to analyze the possibility of recognizing this right. So, I was appointed and I worked to have this right recognized. Bolivia, which was very interested in the recognition of a right to water at the time, took up the issue. I persuaded the Ambassador of Bolivia to the United Nations in New York to include not only the right to water, but also the right to sanitation. On 28 July 2010, the United Nations General Assembly adopted the resolution making access to drinking water and sanitation a fundamental human right. This was an essential step and one of the happiest days of my experience as a Rapporteur!

Is this recognition mainly symbolic or can it bring about a real change?

It is first and foremost symbolic, but I do, of course, hope that it will have more far-reaching effects. It has already influenced the Sustainable Development Goals (SDGs) and has even led to the adoption of an independent goal on water and sanitation set out in the 2030 Agenda. I fought to make sure that it was not limited to a simple declaration of good intentions. It was absolutely essential that the normative content was included in the SDGs. Making access to water a right means that it must be affordable, accessible, of good quality, etc. Furthermore, did you know that the only human right explicitly recognized and mentioned in the 2030 Agenda is precisely the right to water and sanitation? This is the result of the battle I waged with hundreds of civil society actors. These rights have now been taken into account in constitutions and national plans. People make claims about them in national courts. The world is changing. Some headway is being made. The  situation is, however, far from being perfect.

How can we account for the current water crisis?

The quantity of available water today is the same as the quantity available at the time of the dinosaurs. The first difference is that there were fewer dinosaurs than there are humans. The second is that in their time, there was no tourism, agriculture or industry. Yet agriculture consumes 70% of the fresh water available and industry 19%.

It is essential to educate the population by explaining that water is a scarce and valuable resource, but it does get on my nerves when some try to lay all the blame for the water crisis on individuals! Households have more swimming pools, showers, washing machines, dishwashers, etc., but the major problem is not related to domestic use. The quantity of water available per capita is admittedly falling. I also do not deny the impact of climate change. But we know that there is enough water on the planet to ensure access to it for all. The problem lies in poor public policies and the significant lack of regulations, which are, however, essential in order to prioritize the various water uses. For example, in the event of a crisis, will priority be given to human consumption or to watering golf courses? Or to the irrigation of huge agricultural crops intended for export?

“Day Zero” is scheduled for July 9th in Cape Town

Why do you talk about poor water management?

Firstly, there is a huge lack of investments in the maintenance of water systems. For example, in the USA, the situation is tragic. The equipment is dilapidated, never repaired, and there are huge losses recorded.

Secondly, certain tariff or subsidy systems have adverse effects. The example of Jordan clearly illustrates this: the Government maintains substantial subsidies for water for agriculture, as it is a major source of foreign currency for the country. But the adverse effect of these subsidies is that they have encouraged farmers to consume a lot of water in one of the countries in the world where there is the least water. The Government is now making efforts to promote water-saving crops, but priorities are changing very, or even too, slowly.

In the tourism sector, we see that it is only when the price of water increases that hotels invest in water-saving taps or water recycling systems. For example, in Las Vegas, which is located in one of the most arid regions in the USA, very binding tax policies have forced hotels to drastically reduce their consumption, while ensuring that the city’s tourism revenues are maintained.

In Japan, certain buildings have been equipped with dual pipe systems: the water used for the shower does not go down the drain but is reused for toilet flushing. In Singapore and Australia, water recycling is also being developed: recycled water goes back into the drinking water system and is safely drunk by people.

We need laws, public policies and regulations to encourage agriculture, tourism and industry to make efforts to save, recycle and reuse water. People have a responsibility, but it is especially governments which have the duty to adopt appropriate legislation.

How do you account for the deficiencies in public policies?

The lack of good public policies is sometimes due to a lack of knowledge or competence by governments. However, the main reason is that it is difficult to win elections by promising to adopt this type of measure for water management. It is a subject which can be difficult to sell electorally. This is especially because in the water sector, most of the infrastructure is underground. Yet what cannot be seen does not gain votes.

Water is too cheap in many countries. The price of water should be increased for those who can pay, slums should be connected to the official networks and social tariffs should be introduced for the most vulnerable. This would establish a fair system accessible to all, while avoiding wastage. But the increase in water tariffs can bring about revolutions and few politicians are willing to take this risk. However, if the Minister of Water is smart, he can have a lot of success and maybe even become Prime Minister!

What are the future challenges?

Today, over two billion people lack drinking water. Every year, millions of people die from diseases related to unsafe water. With the ongoing climate change, there will be less and less fresh water available. The real tragedy is that the aggravation of the water crisis will first and foremost affect those who are already the most disadvantaged. Those who suffer in times of abundance will suffer even more in periods of scarcity. There will be an extremely marked increase in inequalities.

I am very concerned about inequalities. I have fought relentlessly in this field. When I was a Rapporteur at the United Nations, my objective was to include this theme in the SDGs. We succeeded. For this recognition to serve a purpose, it has to be taken into account and we have to change the way we work. Unfortunately, I do not see any changes. We cannot simply say: “Almost everyone has access to water.” This “almost” is not good enough for me. This “almost” means that we are continuing to ignore the poorest, people who belong to an ethnic, linguistic minority, etc. If we do not identify the most marginalized (the homeless, migrants, refugees) and if we do not implement special public policies to reach them, we will never achieve a rate of access to water of 100%. Yet 100% of human beings with access to water and sanitation is what all the Heads of State and Government pledged to the world in September 2015.

“Day Zero” is scheduled for July 9th in Cape Town 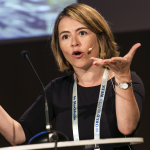 Executive chair of the Sanitation and Water for All Partnership