The private sector is still suspected of using doublespeak over the environment, with more concern for its image than for climate change… What is your reply to these accusations of greenwashing?

As an international advocate for companies, the International Chamber of Commerce can assure you that its members have been actively engaged in the fight against climate change for many years. They have already invested heavily in clean technologies, as can be seen with the rapid development of wind and solar equipment, for example in France. As highlighted at the recent Business and Climate Summit in Paris in May 2015, the transition from a very high-carbon economy to a low-carbon economy is in the best interest of companies and provides many growth opportunities with, at the end, the creation of a significant number of jobs.

Are companies fully aware of the long-term stakes related to the climate?

It is wrong to think that corporate strategy is focused on the short term. For example, the energy and mining sectors need very heavy investments, which require a long-term vision. Many companies are aware of the need to reduce and permanently eliminate greenhouse gas emissions and have made commitments to this effect, subject to governments establishing a clear, stable and predictable regulatory framework.

Is it not only a question of Corporate Social Responsibility, but of a real concern for environmental issues?

The two are complementary. I want to take this opportunity to point out that the International Chamber of Commerce has just adopted a new Charter for Sustainable Development to help companies, especially SMEs, establish a strategy and actions in this field, starting with sensitizing their staff to both the social and environmental challenges facing the planet. Clean business is good business, as we say. We can quite easily develop clean and profitable activities by reconciling environmental constraints and social progress, as well as the interests of the different stakeholders: employees, shareholders, clients and citizens. We can mention the example of French companies, like Schneider and Electricité de France (EDF), which have launched projects to give rural communities access to electricity in Sub-Saharan Africa using renewable energies. I would remind you that the bulk of investments and technological innovation required for the fight against climate change come and will come from companies, which are a source of value and job creation.

Does the conflictual approach between work and capital block possible progress towards a more environmentally friendly society?

We need to stop constantly pitting capital against work. There would be no permanent jobs without companies which invest and create value. France is an interesting example, and it is not only because it will be hosting COP21 this year. Indeed, the law on the energy transition is along the right lines. It is based on a constructive dialogue between companies, trade unions and civil society, which has made it possible to produce a consensual text.

What foreign models are available to France, particularly to the private sector?

We have nothing to be embarrassed about in terms of what French companies are doing, especially the large groups which are very committed to this battle. Companies and their positive role are more accepted in northern European countries. I would also like to emphasize the conduct of China. It holds the world record for greenhouse gas emissions and is making much more efforts than we realize to reduce its carbon footprint. For example, in 2014, it invested USD 90bn in renewable energies and, for the first time, reduced its coal consumption between 2013 and 2014. But it would be naïve to think that we can do without coal and oil in the world overnight, while these two primary energies account for some 60% of the energy mix.

What about the proposal for stranded assets, the closure of assets in the mining sector to limit gas, oil and coal exploitation?

On these issues, public authorities must make the right decisions. It is necessary to examine how to convert this activity, based on the negative consequences for employment.

Another example of virtuous conduct is that of the Ikea Group, which has set out to achieve zero CO2 emissions by 2030, and the Air France-KLM Group, which is a pioneer in the use of biofuels for its jet engines.

Does the oil lobby hinder moves towards the energy transition?

I see two types of actor in what we call the oil lobby. Firstly, the countries that hold resources. They do not all act in the same manner. For example, Saudi Arabia and Algeria, whose economies continue to be highly dependent on gas and oil exploitation, could follow the example of the United Arab Emirates (UAE), which have decided to reduce their dependence on the exploitation of hydrocarbons and have already diversified their economy by developing service activities. This type of country could be quite defensive during the negotiations in Paris in December. Secondly, there are operators of oil resources, large corporations, which also do not all follow the same strategies. If we take the example of Total, a French group which has decided to stop investing in coal and develop its Business Model by making the changeover to renewable energies, it is today the world’s second largest producer of    solar equipment. 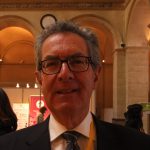