The 17 Sustainable Development Goals (SDGs) aim to achieve low-carbon development which leaves no one behind and a society of sustainable and universal progress. They are based on a common foundation, with quantified and measurable targets which everyone can adhere to.

Sector conducive to co-construction and synergies for services…

The SDGs are a rallying tool for scaling up action that creates multi-actor dynamics. They bring together all stakeholders, including the most vulnerable people, by focusing on the complementarity of civil society, territories, citizens, companies, NGOs and local authorities, because the issues of exclusion, poverty and climate change are not independent of each other. Their effects are, indeed, to a large extent combined, at the expense of countries and the most disadvantaged people. They must consequently be addressed in a holistic and integrated approach. Access to financial tools for all and the resulting empowerment is a key driver which should be further strengthened and standardized.

At Convergences, over 240 organizations of all type work together towards a common objective in working groups: for a “Zero Exclusion, Zero Carbon, Zero Poverty” world in the North and South alike. Their members contribute to working groups which centralize and analyze data from sectors working for sustainable development. Microfinance is the historical point of convergence between the competences of NGOs, banks and States. Every year, this collective reflection gives rise to the Microfinance Barometer, which gives an exclusive presentation of microfinance figures in France and Europe. What are the main trends highlighted in this new edition?

Development of microfinance in both the North and South

Microfinance has once again demonstrated its strong impact, with double-digit growth estimated for 2015. Indeed, 2015 saw significant development, with a 10% increase in outstanding loans and a 15.8% rise in the number of borrowers. For 2014, the portfolio was evaluated at USD 87bn, with 111 million customers. Developing countries continue to be the most concerned: India, Peru and Vietnam are on the podium of borrowing countries. South Asia has seen the largest increase and has more borrowers than the rest of the world. The sector has developed in the North, in particular thanks to the EU Employment and Social Innovation (EaSI) Programme: according to sector experts, some 20,000 microenterprises will be able to benefit from loans for a total of EUR 237m thanks to this mechanism.

Non-banking financial institutions continue to dominate the market with 43.3% of the total market, against 27% of the market held by banks and non-governmental organizations (NGOs). These institutions extend the range of services with non-financial products, and micro-insurance could revolutionize access to healthcare in West Africa. Concrete examples, such as in India with the microfinance institution Ujjivan in the field of education, the Watsan program in the field of access to drinking water, and the Social Cohesion Fund in France, illustrate the potential of this range of inclusive financial tools.

Put the user back at the center of the system

Faced with this exponential development, it is important to pursue the initiatives to build responsible and responsive microfinance which puts customers at the center of strategies and actions in the sector. The sector is a driver for financial inclusion and promotes access to basic services such as health, food security, education, energy and housing, thus confirming its role as a catalyst for comprehensive and inclusive development. The tools must remain accessible to customers and non-banking actors.

Responsibility also requires a rigorous measurement of the tool’s social performance, in addition to its economic efficiency. The Universal Standards, which are international references for rigorous social performance management practices in the inclusive finance sector, are being increasingly used by longstanding actors, but are not properly mastered by new actors. They are, however, essential to the development of microfinance in keeping with its original social inspiration, offering tailored loan, savings and insurance services which are accessible to the most vulnerable, as well as non-financial services which contribute to eradicating poverty by allowing the most deprived to develop income-generating projects, and supporting them through training and counselling actions.

Microfinance will thereby contribute to passing on an economically stable and viable world to future generations and to extensively disseminating well-being, health and access to basic services. We are convinced that the omnipresence of responsible finance in the 2030 Agenda is part of a real change in perspective and not simply a passing fad. Convergences will be continuing its action along these lines.

This post is the result of the teamwork of Convergences and partners of the Microfinance Barometer 2016, represented by Florence Rainex, Chief Executive Officer of the Fédération Nationale des Caisses d’Epargne, Ann Miles, Director of Financial Inclusion and Youth Livelihoods at the MasterCard Foundation, Christoph Pausch, Executive Secretary of the European Microfinance Platform (e-MFP), and Gaël Marteau, National Director France at Oikocrédit.

Video about the Microfinance Barometer:

Green microfinance: A solution for access to essential services? 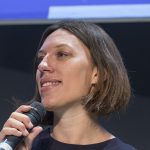