In recent years, Ghana has experienced significant performance in terms of economic growth and poverty reduction. But there is a fly in the ointment: in terms of development, a major North – South gap still prevails. Indeed, some 60% of the poorest populations are to be found in the three Northern regions. Economic and demographic trends show that poverty could be eradicated in the South of the country by 2030, while it is expected to continue to affect some 40% of populations in the North regions. The Savannah Accelerated Development Authority (SADA) is a regional development agency set up in 2010 to bridge the North – South divide in Ghana. An interview with Mariama Awumbila, Professor of Geography and member of the Board of Directors of SADA.

Why is there such a North – South divide in Ghana, as in all the countries in the Gulf of Guinea?

It is a legacy from colonial history: the British were interested in the exploitation of cocoa and gold in the Southern coastal regions. They encouraged populations in the North to move in order to meet manpower needs at the plantations and mines. In the 1950s and 1960s, Ghana’s Southern regions also attracted large migration flows from the whole of West Africa.

The successive governments attempted to address the regional disparities, with free education, for example. But no policy has had the desired effects. The Northern regions, which are currently populated by 30% of the 26 million Ghanaians, have remained underdeveloped. They are lagging at all levels: poverty, health, education, sanitation, unemployment, etc.

In 2010, the Government decided to set up SADA, whose name refers to the savannah, which dominates in the Northern regions. The authorities want to ensure that no one is left behind in the current growth dynamics (7.3% in 2013, approximately 4% in 2015).

Ghana was the first country to achieve Goal 1 of the MDGs, wasn’t it?

Yet it has 55% of arable land and abundant water resources, thanks to the Volta River and Lake, which is the largest artificial lake in the world. It is possible to turn these areas into the breadbasket of Ghana, or even West Africa, provided irrigation is developed to facilitate the cultivation of these foodstuffs which our country still largely imports – rice, beans, cereals and livestock products.

What are the strategic priorities of SADA?

We especially think in terms of sustainable development. Agriculture is the main activity of populations in the South of the country, but this primarily involves food crops. If we want to transform our primary sector (20% of GDP) at national level, we need to develop the North, both in terms of infrastructure and access to markets. Every year, part of our onion and rice production is not sold, due to the lack of infrastructure to transport it to the large cities.

We are all familiar with Africa’s megacities – Cairo, Lagos, Johannesburg –, but we should not forget that future urban growth, with the ongoing population expansion, will also take place in secondary cities. It is an opportunity for the latter to sustainably develop. The main challenges concern finance, infrastructure, but also capacity building for the resource persons we work with in the field.

For example, an urbanization plan is currently being implemented in Tamale, the main city in the North of the country (300,000 inhabitants), but also in the small town of Buipe, located in the center of the country, in order to turn it into a port town and open up Northern regions.

What are your operating methods?

We have a pragmatic approach and our agency continues to be a lightweight structure, with 35 employees in the city of Tamale and an office in Accra, the capital.

We do not directly conduct projects. We rely on field actors and act as a catalyst to facilitate their action. We conduct a mapping to make a detailed inventory of the available resources.

In order to eradicate poverty, we focus on agricultural projects and we make it easier for investors. For example, SADA acts as an intermediary for private operators who want to develop agricultural projects. We help them obtain formal land titles, an area which remains very complex because it is governed by customary law.

Consequently, the actions conducted by our agency fit in with a long-term national development plan, which will begin in 2018 and span over a period of 40 years. We have a specific approach to the environment, as the savannah is more vulnerable than in areas in the South of the country. The agricultural transformation program is not new in the South, but we facilitate its transposition in the North. For example, we are developing a Land Trust, a fund which facilitates the acquisition of land. It does not exist in the South and operates autonomously. We are holding discussions with the African Development Bank (AfDB) in order to finance long-term development, with the aim of establishing a specific development bank for our region.

More specifically, how do you work with donors?

We are first and foremost supported by the Government of Ghana, as well as by the World Bank and United Nations Development Programme (UNDP). In 2008, President John Kufuor announced a special initiative for Northern Ghana, in the form of a Northern Ghana Development Fund (NGDF), with a start-up capital of USD 25m. Our agency was subsequently set up in 2010 to reinforce these efforts with a pragmatic approach. The support from donors is invaluable to us and we work together with them to achieve the SDGs. 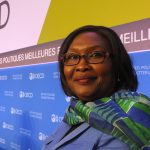