Research Professor in History and Politics, University of the Witwatersrand, Johannesburg

Two intellectuals who have their roots in Africa, the Senegalese economist and writer, Felwine Sarr, 44, who is based in Saint-Louis (Senegal), and the Cameroonian historian and political scientist, Achille Mbembe, 59, professor in Johannesburg (South Africa), launched the first edition of the Ateliers de la Pensée (“Thinking Workshops”) on 28th October in Dakar. These workshops gathered some twenty intellectuals from French-speaking Africa and the diaspora, including the writers Léonora Miano, Sami Tchak, Alain Mabanckou, Boubacar Boris Diop and Abdourahman Waberi, the renowned academics, Mamadou Diouf and Souleymane Bachir Diagne (Columbia University), Romuald Fonkua (La Sorbonne), as well as a number of women, including the political scientist Françoise Vergès, and philosophers Houria Bentahoumi, Séverine Kodjo-Grandvaux and Nadia Yala Kisukidi.

They held long discussion sessions, both closed and with the public, at various venues in Dakar and Saint-Louis, during marathon evenings which met with great success. Their objective is to take stock of how their respective research and reflection are progressing, and chart a new course for reflection on Africa’s future, by leaving behind the post-colonial period.

Achille Mbembe, who is back in Johannesburg following an intensive week in Senegal, answered iD4D’s questions.

What do you feel were the key points of the Ateliers de la Pensée?

The first concerns the predominantly futuristic slant of the discussions. These days asserted the fact that Africa’s future is open, and that it is up to us to make it happen, in a process which is not predetermined. To achieve this, we cannot do without reflection, which is necessary in itself, but also essential for action. Over the past sixty years, since independence, the frenzy of action has been of little use to us. Clearly-defined lines of action need to be determined.

The second key point of these Ateliers de la pensée is that many people recognize that it will be necessary, as Felwine Sarr says, to “rebuild our mental infrastructure” – in keeping with the spirit of the psychiatrist from Martinique, Frantz Fanon, author of Peaux Noires, Masques Blancs (Black Skins, White Masks) (Seuil, 1952). The debates introduced by the philosophers Séverine Kodjo-Grandvaux and Houria Bentouhami on the themes of shame and self-esteem were crucial, as were the reflections made by the Senegalese historian, Mamadou Diouf, on what he called “the genius of paganism” (in reference to the title of a book by the French ethnologist Marc Augé) and the philosopher Souleymane Bachir Diagne on “horizontal universalism and the translation of cultures”.


Finally, I would say that the high point of the discussions concerned the recognition of the fact that the African issue is now global. The cornerstone of the Ateliers de la Pensée is based on this idea: part of the future of the world hinges on Africa, a continent which has much to contribute. The strength and innovative aspect of this proposal account for the keen interest generated by these workshops. Whether we believe it or not, this proposal made ideas ring out in the skies like a joyous clap of thunder.

Do you agree with Felwine Sarr in saying that it is time to leave the colonial period behind?

It is time to tackle the issue of Africa’s immediate, near and distant future. What we need to leave behind is a certain sentiment of being a victim, the visceral search for scapegoats. This does not mean falling into a sort of historical amnesia, but rather taking responsibility, a sharp wake-up call to this simple fact: our destiny is in our own hands. This means leaving behind the colonial glaze and questioning everything which purports to intangibility, whether in relation to frontiers, gerontocracy, patriarchy or wishful thinking.


What did your discussions on the economy focus on?

The predominant sentiment is that Africa has paid a very high price for its subservience to “economism”, an extremely instrumentalist way of considering the world and the future. Economics is about means and is not a matter of objectives. It cannot be cut off from social and anthropological facts. It is embedded in reality, to cite the expression of Karl Polanyi. Discussions also focused on the role played by the informal sector in African economies. It is defined as negative and the advocates of neo-liberalism believe it is absolutely necessary to combat it, whereas it is a vector of flexibility and solutions according to more heterodox views.

A bit of controversy broke out about the first session of public debates on October 28th being held at the Institut Français in Dakar. What is your view about this?

It is a bogus argument. The answer is simple: all venues need to be used simultaneously. All the 600 to 700 Dakar residents who came to attend Ideas Night on 28 October at the Institut Français do not suffer from some kind of mental colonialism! The workshops of the Ateliers de la pensée were open to the diaspora, which includes French citizens. The Institut Français belongs to them. Furthermore, the second day was held in the gardens of the Council for the Development of Social Science Research in Africa (CODESRIA), a pan-African research institute based in Dakar.

How do you gauge the success of these “Thinking Workshops”?

Africa is our Future 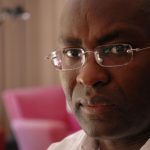 Research Professor in History and Politics, University of the Witwatersrand, Johannesburg