Facebook Twitter Link
Copied to clipboard
A man walks past the statue of the last colonial governor of Côte d'Ivoire, André Gaston Latrille (1942-1947), in the residential district of Cocody in Abidjan on June 17, 2020. (Photo Issouf SANOGO / AFP)

The scenes from Minneapolis have been beamed across the entire world. Above all, it has exposed, or rather, encapsulated, a major part of Western history. Certainly, Georges Floyd’s painful last words—“I can’t breathe”—could just as easily have been uttered by an African slave, tied up in the hold of a ship on its way to colonial America, two centuries ago. And it could also be true of those a short time later, during the European colonization of Africa, who were subjected to forced labor, sweating blood and tears to build the Congo-Ocean railway line.

The news has also spread in Africa, particularly in Abidjan, Côte d’Ivoire, where young people, no doubt feeling that these events resonate with the country’s long colonial history of violence and domination, took it upon themselves to rename a famous boulevard in its economic capital. Its name is the Giscard d’Estaing Boulevard. Thirty years ago, Alpha Blondy, a famous Ivorian artist, renamed it the “Boulevard de la Mort” (Boulevard of Death) because some pedestrians who dared to cross it had been run over.

It is clearly quite surprising that, in 2020, the name of a French president is still being honored in this way, in what used to be the “jewel of French West Africa.” And it is even more astonishing to note two other equally famous names: François Mitterrand Avenue and the Charles de Gaulle Bridge.

To better understand this issue of colonial memory, it is important to know that these honors were bestowed upon the three French presidents by the man who, for more than thirty years, reigned over Côte d’Ivoire: Félix Houphouët-Boigny. It should also be noted that he named another bridge in Abidjan after himself but, interestingly enough, he was not honored with one of his own streets, avenues or boulevards in mainland France.

Having died in 1993, this man, a minister under the French Fourth Republic and at the beginning of the Fifth, was given a grandiose funeral in Yamoussoukro (in the center of Côte d’Ivoire), his native village, which was like a small version of Brasilia, attended by all the great names of the Fifth Republic, whether from the right or left of the political spectrum. This was the least people could do, because Félix Houphouët-Boigny was much more than simply the President of Côte d’Ivoire.

With the leverage of a country that had enjoyed fairly exceptional levels of development until the 1980s (the famous “Ivorian miracle”), he played a major role in France’s policy-making for Africa (commonly known as “Françafrique”), alongside Jacques Foccart. And, to some extent, it was in this capacity that he was able to pay homage in Abidjan, for a time also known as the “showcase of the West”, to the names of these three presidents.

Colonial memory: a statue in homage to a French governor

Nonetheless, it is not just the names of famous French compatriots that may come as a bit of a surprise when traveling around Abidjan. The names of former colonial leaders or governors are also on show, as if the independent Côte d’Ivoire had decided to assume its entire history. Clearly, the country runs the risk of not acknowledging important Ivorian individuals who deserve, at the very least, to feature in its public spaces.

When invited to a symposium on traditional African religions in 1962, Michel Leiris (ethnologist and writer, among many other things) came to Abidjan and, as usual, kept a log of his journeys, in which he expressed his surprise to see that many of the streets in the Ivorian capital were named after colonialists (Feuilles de route en Côte d’Ivoire (October 1962, Gradhiva, 30/31, 2001/2002). He would probably have been even more disappointed to note that, much later, little has changed in this regard and, on the contrary, the names of French presidents adorn the main roads in Abidjan.

However, if he had visited Côte d’Ivoire again a few decades later, he might well have been curious about a very long boulevard running through the pretty Cocody district of Abidjan, which leads straight to the equally luxurious Hôtel Ivoire. This major road bears the name of André Latrille, with a statue at the end, erected in his honor, commissioned under the careful attention of Houphouët-Boigny.

Who was this historic French figure to have deserved so many honors, whose statue was erected after his death in 1987 and long after the boulevard was completed? It’s not as if his memory needed to be glorified even more. There is no doubt that he was a governor, but a colonial governor with a hardness of character that harks back to the particularly turbulent history of contemporary France, in which colonized Africa played a key role.

“They’ve stolen too much from us”: a cry from the heart that echoes through the ages

André Latrille was with Félix Eboué, the Guyanese governor of Chad, when he decided to join de Gaulle and Free France without warning in the summer of 1940. Later, having become a Gaullist and Resistance fighter, he was appointed governor of Côte d’Ivoire by Free France in 1943. Around that same time, a certain traditional chief named Houphouët-Boigny, an African doctor and coffee and cocoa planter, had made a name for himself by publicly denouncing the price policy implemented by the colonial authorities. This policy resulted in a small minority of European planters being paid considerably more than the mass of so-called indigenous planters. Houphouët-Boigny expressed this denunciation in one sentence: “They’ve stolen too much from us.” Keen to put words into action, Houphouët-Boigny decided to create an agricultural union to defend the interests of his compatriots.

Remarkably, André Latrille quickly came to an agreement with Houphouët-Boigny, thus allowing him to establish his union. He used this as a springboard to raise his profile, becoming an increasingly prominent figure in Ivorian public life. This is demonstrated by the major role that Houphouët-Boigny played two years later in the founding of the African Democratic Assembly (1946), a party set on fighting for political emancipation. As a Gaullist, Latrille was thus labeled a “communist” by the notoriously conservative fringe of the colonial lobbies.

A colonial memory that burdens both sides

Evidently, André Latrille is an interesting character in France’s colonial history, or so-called Franco-African history. There are undoubtedly many others who could illustrate the complex nature of this history. However, if Houphouët-Boigny had not preserved Latrille’s memory in a rather glowing report (he wrote an obituary in the Le Monde newspaper in 1987), he would have been completely forgotten, especially in France, where little is generally known about the country’s colonial past.

Thus, with regard to the young people in Côte d’Ivoire who are determined, for the reasons described above, to rename the Giscard d’Estaing Boulevard, two points should be taken into consideration. On the one hand, it is probably time for the country to remove this dubious souvenir of the past which is taking up space that could be used to honor other important memories (those of Ivorians or Africans) which deserve some public recognition at long last. This may help the Abidjan people to breathe a little easier.

On the other hand, if young people decide to attack the name of the Latrille Boulevard and its statue, taking it down as has and will be done again with other statues depicting colonialists, they may neglect the importance of this significant moment in their country’s history, which is encapsulated by what I would call the Houphouët/Latrille couple. This pair deserves, if not respect, then at least, serious consideration. 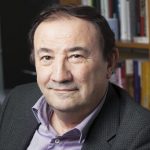 In his book L’Invention du colonialisme vert – Pour en finir avec le mythe de l’Éden africain (“The Invention of Green Colonialism – Putting an end to the myth of the African Eden,” Flammarion, 2020), the environmental historian Guillaume Blanc analyzes the undercurrents and consequences of an...
Interview