From your experience as a negotiator, how should we address a peace process?

These are the five main lessons I have learned. First of all, conflict management is crucial for development. If we want to aim at stabilizing the world, we must first of all have a clear understanding of tribal conflicts, whether they are related to religion or identity, in order to resolve wider political problems. In addition, it involves initiating discussions with the most moderate, interesting and constructive members of these tribes, who are likely to provide solutions.

It is, of course, essential to gather the international community and coordinate its action, by relying on some key actors. It does not necessarily involve the same leaders for each crisis. For example, for the peace process in Sri Lanka, it was essential to involve India, then the USA. The role of negotiators is to promote this way of working together.

In a conflict, it is just as essential to speak to everyone. Even to terrorists… Despite what the USA said in 2001, it is always preferable to speak than to fight. Initiating a dialogue is not a sign of defeat. This principle, which is valid for private life, is also valid in the public sphere. To take the example of Sri Lanka, it would have made no sense to ignore the Tamil Tigers: it was necessary to speak to their leaders. There are two important things to know in terms of this type of political leader: they rarely take rational decisions, and they are often alone. Consequently, it is necessary to find the right words, the right register. They must be able to trust foreigners, feel that they are not being demonized. It is never a good decision to sever links, as we have seen in Iraq.

To resolve a conflict, it is also necessary to have patience. Building or rebuilding a stable State takes times, it is a long process. You need to count a minimum of ten years.
Finally, I will add that everything is interconnected. The economic, sociological, development, political and military issues are intrinsically linked. Yet the various types of actors who intervene in crisis countries tend too often to work in silos.

What advice would you give then to a donor in crisis situations?

Development agencies are focused on their projects, and too often not sufficiently connected with political issues.
What is the main political principle that should be applied in each area of operation? This principle, which is defined at the highest level, should be clear for each donor country. If we look at the Somali conflict, I remember a superb framework document, with about a hundred principles… each more important than the other. But what was the real guideline? It is essential for this guideline to be clear. Otherwise, aid may even be a destabilizing factor. For example, the influx of donations in the aftermath of the tsunami in 2004 was well intentioned, but undermined the ongoing peace process, which should have been the guiding principle for the action of donor countries.

In fragile countries, the priority must be to strengthen the State and the organization of relations between the latter and civil society. The best projects cannot replace this. DAC’s role is to bring together donor countries around key political principles. The aim of the New Deal for Engagement in Fragile States, which was adopted at the Busan summit for aid effectiveness in 2011, is for these principles to be reflected in action, not only on paper.

Among donors, it is more effective to have a lead donor for each area of tension. For example, France knows West Africa very well, and its action is currently recognized in CAR. However, it should dialogue more with East Africa, learn about the codes and culture. Perhaps France should also change its discourse, showing that it no longer considers Africans as only a people that needs “to be helped”.

How to strengthen the State?

The state is the most important entity for any recovery from fragility. Without a state monoply on violence it is normally extremely hard to create peace and prosperity. A state is also central to framing the market, encouraging private investment and the production of welfare and economic development. For all these reasons development partners must give priority to the state in handling fragility. Even when states are very weak, we must try to use them. Nothing can grow if it is not used. So assisting even precarious state formations is central. The main recommendation this is to try to use “country systems”.

We can manage the support for state formations through donor alignment behind government priorities. That is what we are trying to achieve through New Deal Compacts. The New Deal statebuilding goals also point to the need for donor coordination, based on priorities set by national authorities. 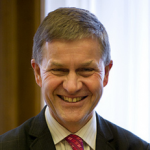