Jean Weissenbach (CNRS) has been interested in a decontamination technique for twenty years now: biodegradation. He has focused on the search for microorganisms that break down pollutants, which he describes in his book Dépolluer la planète (Éditions CNRS, 2019). 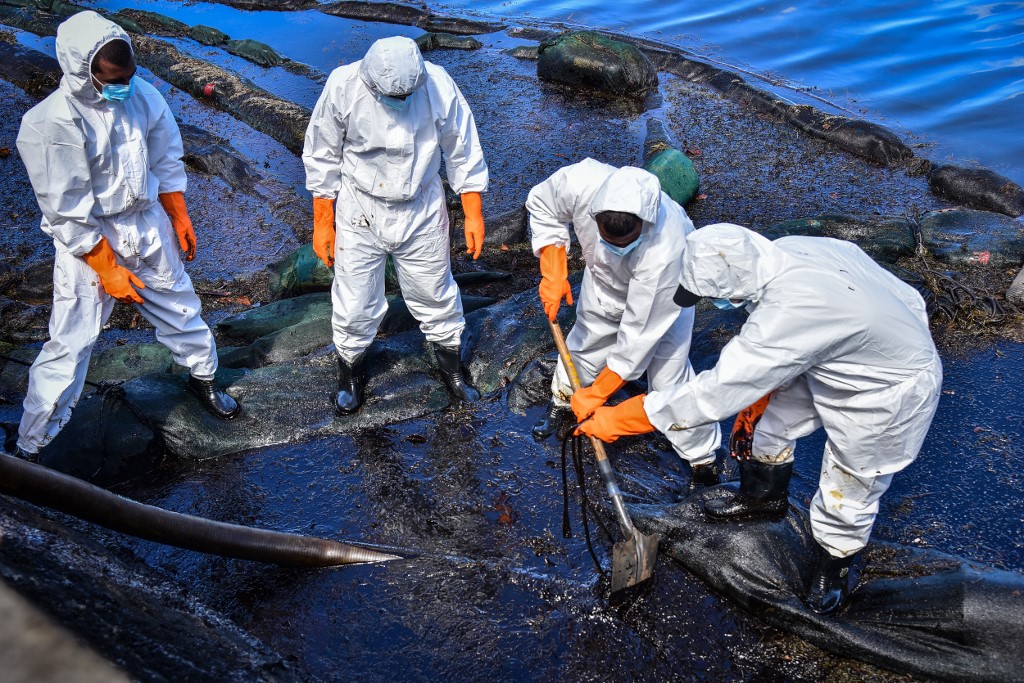 Volunteers collect leaked oil from the MV Wakashio bulk carrier that had run aground off Mauritius in August 2020. Photo by Beekash Roopun / L'Express Maurice / AFP

Can living organisms contribute to decontamination?

Living organisms have been breaking down and transforming most organic substances since life appeared on Earth. Humanity has been aware of this for a long time, for example, with the observation of rotting food or wood. But science only began to understand these phenomena starting in the mid 19th century.

Biodegradation refers to when biological agents break down substances: microorganisms, bacteria, fungi, plants. The use of their fascinating properties can transform pollutants and rehabilitate sites contaminated by industrial or agricultural activities, such as pesticide application. Bioremediation, i.e. the decontamination of polluted environments by biological systems, can therefore be considered as a way to address the introduction of an increasing number of xenobiotics, which are molecules foreign to natural environments.

What methods are used to break down pollutants?

There are various ways to implement bioremediation. The most natural method is biomitigation: we ensure that the soil contains the micro-agents required to break down pollutants and we leave it to happen while monitoring it. A single species of microorganism is generally not sufficient, a consortium of species is needed. This takes a few years. It is effective in the case of hydrocarbon pollution, for example, but it is extremely slow.

If the microbial flora present in the environment lacks nutrients to ensure its optimal functioning, it is possible to inject nutrient adjuvants (minerals, vitamins, organic products…). This is called biostimulation. Similarly, certain chemical conditions of the environment can be modified, such as acidity, to stimulate the process.

When the local bacterial flora is not sufficient for the decontamination, exogenous microorganisms are introduced. For example, polluted soil can be mixed with another soil that has been previously contaminated by the same pollutant in which there are microbial agents able to break it down. Part of the soil that needs to be treated can also be collected and the growth of microorganisms can be initiated in more favorable conditions. In both cases, the objective is to sow the soil with bacteria to initiate the breaking down process. This is called bioaugmentation.

What are the other decontamination methods?

Another method involves modifying the genome of the bacteria present to make them more effective, more resistant and give them additional qualities to optimize the breaking down of the targeted pollutants. The introduction of genetically modified microorganisms is subject to debate, but there is good reason to believe that the risk of uncontrolled proliferation is largely overestimated. It should be remembered that genomes mutate regularly and spontaneously in nature.

Plants and fungi associated with roots can also be used, for example, to build up mineral pollutants in the above-ground parts of the plant or to modify the properties of the soil. Reeds can reduce phosphate concentration in a body of water. The effects have been proven, but the implementation of these techniques often remains experimental. Generally speaking, we still need to learn a lot about decontamination processes through the living world and their optimal use.

In what cases are bioremediation techniques used?

It is estimated that there are over 3 million polluted sites worldwide, i.e. about 22 million hectares. It’s a huge number! In practice, bioremediation processes are especially used on industrial sites where there have been chemical leaks and the parties involved have had to clean up. This is the case with the land of former coking plants or former facilities for mining or processing petroleum products, which are very often contaminated by all kinds of hydrocarbons. Solvent leakages in chemical plants are also quite common.

What have been the main successes of bioremediation?

The first major success of bioremediation is water treatment. Water was highly polluted in Europe at the end of the 19th century. Rivers were increasingly contaminated with the expansion of cities during the industrial revolution. It took half a century of research to develop the activated sludge method in 1914. It became widespread in large urban areas after the First World War. Microbial sludge activated by oxygen breaks down organic matter.

Water treatment is today the largest biotechnological industry in the world. However, certain problems still need to be dealt with, such as the elimination of micropollutants caused by large quantities of medicines or household products in wastewater. There is quite active research in this field.

Are there solutions against pollutants in plastics or heavy metals?

Plastics are extremely persistent pollutants. We have let them build up due to their low chemical toxicity and by 2025 there will be 200 million tons of them, i.e. a fourfold increase in ten years! Yet their mechanical action can be extremely harmful.

Unfortunately, natural environments are unable to metabolize them: no microorganism feeds on these synthetic polymer. Research teams are working on bioremediation processes. But for the time being, despite the optimistic announcements, there is no effective method to treat them.

Mineral products are also not biodegradable and bioremediation has for the time being shown mixed results. The problem of both plastic and heavy metals is above all the quantity of the waste accumulated. The main message in terms of sustainable development is not to pollute rather than hoping that nature does the cleaning up.

What are the obstacles to bioremediation?

Decontamination by bioremediation requires close monitoring. After one or two years, pollutants generally remain in the treated soil and the work needs to be continued. Pollutants are decomposed by a sequence of chemical steps. The fate of the intermediate products of degradation needs to be observed. They may also be toxic, or even more toxic than the initial products. The discharge of polluting products sequestered in soil components also needs to be evaluated. In the case of phytoremediation, pollutants build up in plants, which must subsequently be incinerated and the ashes treated.

The time required, which can be very lengthy, to use these processes and the costs are real obstacles for industries. Furthermore, there is no absolute guarantee of results. The techniques often work partially. Each field and pollution requires implementing a suitable technique. Each site is a specific case: a process will have an effect on a pollutant in one place but not in another.

What can we expect from bioremediation?

Today, there is a little skepticism following excessive optimism. Some believed that bioremediation would be a magic solution to pollution. Yet decontamination is always partial, long, complex and costly. However, it involves methods that are not very disruptive to the environment and much cheaper than physicochemical processes. Without these natural processes which have always been at work, human life on Earth would perhaps already be compromised. There is still much to be discovered, but the research is continuing and there are some promising results.

For example, we are working on the biodegradation of chlordecone, which has been extensively used for decades on banana plantations in the West Indies to control banana weevils. Chlordecone is a cubane, a molecule whose carbon atoms form a compact cubic structure that is highly resistant to chemical attacks and has a very low solubility. It was for a long time believed to be non-biodegradable. Yet we have recently managed to show that it could be broken down by bacteria. This opens up the possibility of accelerating the process.

Ethics for the non-human world: is a plant equal to an animal?

Vegetarianism, a solution for the planet?

Using technology to protect tuna stocks in the Pacific region