President of the African Development Bank

A shorter version of this interview originally appeared on

Africa is the region in the world which suffers the most devastating effects, especially in the Sahel region and desert areas of Southern Africa, with soil degradation, droughts and malnutrition. Madagascar faces massive flooding, as is the case with Mozambique, repeatedly since the Limpopo River burst its banks in 2000. The drying-up of Lake Chad, which has lost 10 times its size over the past thirty years, has serious consequences. In rural areas, half of the population is living below the poverty line.

Africa must not hold this type of record. We need to change this situation, which drives people to emigrate and provides a fertile breeding ground for terrorist groups. We cannot leave African farmers by the wayside. They are fundamental to the national security of our countries, as well as to global security.

Africa, which has already been hit by climate change, must not be further affected due to the lack of financing. Out of the USD 100bn that must be mobilized, about 14% will be earmarked for adaptation. We therefore need to scale up efforts.

AfDB, for its part, is going to triple the amount, to increase its climate finance to USD 5bn by 2020, i.e. 40% of all its investments. We want to achieve concrete effects against deforestation. For the record, 700 million of the 1.1 billion Africans do not have access to clean energy for cooking. Every year, 600,000 people, women and children, die due to pollution caused by coal and kerosene. This is unacceptable! We have six years to reverse this situation. This is also the case for access to electricity. We launched a large-scale initiative in September, the New Deal on Energy for Africa, with the aim of switching the power on in Africa.

Is there not a duplication with the Power Africa plan launched by President Barack Obama in 2013 and the one announced this year by Jean-Louis Borloo’s new foundation?

No, because our aim is to provide universal access to electricity in Africa by 2025, by including renewable energy development. In Sub-Saharan Africa, there is an undeveloped hydropower potential of 300 gigawatts, meaning there is a potential to quadruple the continent’s current installed capacity (80 GW). AfDB is already a partner of the Power Africa plan launched in 2013. It is going to pool all the efforts made here and there and work with the governments of all African countries in order to increase investments in energy. The reforms that need to be made in the energy sector should build on those made in the mobile phone sector to resolve the issues of pricing, subsidies and the role of the public sector.

Will there be water wars in Africa?

To a certain extent they already exist. Nomadic herders lack water, which explains why there are recurring tensions with sedentary farmers all over Africa. We have two challenges to face: draw water and effectively manage these water resources.

Climate change: “We cannot leave African farmers by the wayside”


The objective of COP21 is to limit global warming to 2°C by 2100, instead of over 4°C according to experts if nothing is done. Is 2°C not already too high for Africa?

If it is too hot in rural areas, populations will go towards cities and the migratory crisis is likely to worsen. At COP21, we need to reach the firm decision that the temperature will not increase more.

People in developed countries who pollute the most must reduce greenhouse gas emissions very significantly. AfDB is going to help Africa’s adaptation to climate change, but without work, without the possibility of creating employment in rural areas, without universal access to electricity, the emigration will continue. It is inevitable: even insects go from shaded areas towards light!

Where should we start?

The African continent has enough arable land to feed the planet, i.e. 9 billion people by 2050. The only problem is that we cannot eat potential. It exists, but still needs to be developed. Africa produces 73% of the world’s cocoa, but does not process it on site… The continent only receives 1% of the USD 110bn world chocolate market. This is also the case for cotton. We will need to increase productivity in order to avoid intensive farming and deforestation, but also to invest in the agro-industry, which is the basis of all development.


Do you promote State intervention to limit imports of certain products and develop local industries, for example, onions in Senegal or paddy rice in Nigeria?

We do indeed need to unleash Africa’s potential. I was Minister of Agriculture in Nigeria when, in three and a half years, my country increased its self-sufficiency in paddy rice production from 45% to 90%. We were careful to import good seeds and increased production with two harvests a year. Before eliminating imports, we must take care to ensure that we already have large-scale local production.

Which technologies should be the focus for African agriculture?

The priority is mechanization. Hoes and machetes, which are tools from the Middle Ages, tire farmers and especially women, who work in the fields.

The second emergency area is irrigation. Only 3% of all arable land in Africa is irrigated.

Finally, mobile phone technology can help us. It provides faster access to information by giving farmers market prices, but also access to credit with telephone payment systems. In Nigeria, mobile phones allowed us to put an end to 40 years of corruption in fertilizer supply in 90 days. We checked with farmers that the sacks of fertilizer were actually delivered and we eliminated unnecessary levels of intermediaries. Where there is a will, there is a way! 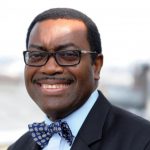 President of the African Development Bank