These standards seek to answer a question which would appear to be very simple on the surface, but which is rather complicated in practice: How to manage performance on the basis of social objectives? The six standards recommend defining these objectives, getting the employees, executives and directors of the microfinance institutions in question to adhere to them, treating clients in a responsible manner and striking a balance between social and financial performance.

These “standards”, which appear to be a matter of common sense, are not intended to be either prescriptive or binding, explains the American consultant Amelia Greenberg, who is based in New York and graduated in International Relations, Economics and French Literature. Amelia Greenberg is Director of Special Projects for the Social Performance Task Force. “We do not tell microfinance institutions (MFIs) what their objectives must be. Some want to promote women, others to send children to school, others to reduce poverty. Whatever the objective, we cannot simply suppose that it has been met. It has to be managed at all levels, from the Board of Directors to the employees, by establishing good practices, collecting data and defining strategies that must reflect them, etc.”

The standards have been built on the lessons learned from local microfinance crises (Morocco, India, Nicaragua), which have cast doubt on the practices of the sector. “Prior to these crises, we assumed that as long as we were working with the poor, we were doing good”, points out Amelia Greenberg. “Then we discovered that there were widespread abuses in microfinance, with client overindebtedness and the failure of the industry to meet its social targets. You need to manage your performance in order to be really sure that you give your clients this benefit.”

The question could also in turn be asked to the Social Performance Task Force. How is it going to ensure that it has met its target? Its challenge now lies in making the microfinance industry more aware of the Universal Standards for Social Performance. The SPTF, which has a secretariat with five people, will be present at the different conferences around the world, points out Amelia Greenberg. “We do not want people to be afraid of being judged, we want them to use the standards as instruments.” The Task Force has also launched a virtual database (for the online library, click here), in order to better share experiences and information, and has called on MFIs to share their experience of each of the aspects addressed by the standards. It also has another working tool: seminars on Internet called “webinars” for discussions on particularly interesting case studies. 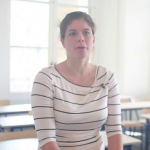 The recovery of African economy after the COVID-19 crisis runs the risk of being uneven, widening differences that exist around the continent, but also with the rest of the world. How can this be avoided? Solutions do exist and are at the heart of the Paris Summit this May 18th.
Opinion

The political response to the COVID-19 pandemic, guided by the European Central Bank, could contribute to exacerbating the inequalities already deepened by the health and social crisis.