International Day for the Elimination of Violence against Women, on November 25, offers an opportunity to reflect on the role of women and their demands in social and political movements all over the world in recent months. 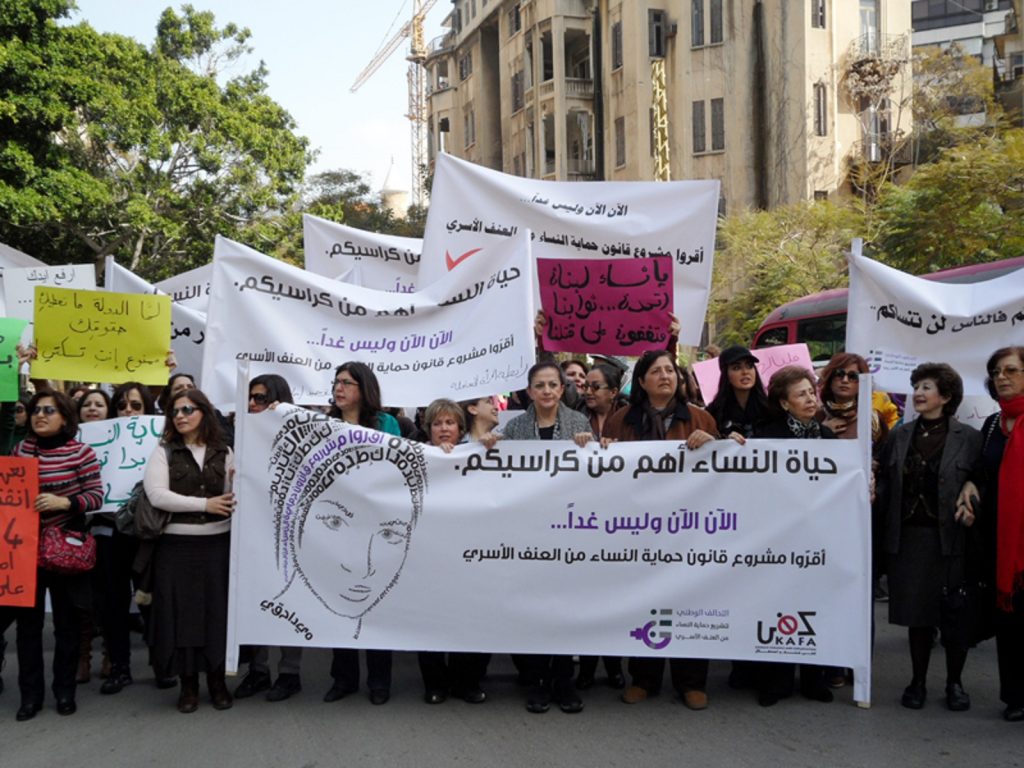 On November 23, 2019, tens of thousands of women (and men) demonstrated in France against gender-based violence and sexual abuse. The event followed on from the Women’s Marches and the #MeToo movements and also came as a reminder of something that is much overlooked: the gender dimension of the social and political movements against those in power taking place in recent months.

The gender challenge is twofold. On the one hand, women in Chile, Argentina, Sudan, Lebanon and Hungary are extremely active and even leading the way in the protests. On the other, their demands for gender equality in different areas (inheritance, family, pay, access to employment and positions of power) and for their rights (freedom of decision over their own body,  freedom of movement, etc.) are renewing the global agenda, all at a time when, in many countries, occupying public spaces to demand your rights is much less tolerated, if you happen to be a woman.

The fight for abortion rights in Argentina

In Argentina, women once again rallied in protest in the weeks preceding the presidential election on October 27, especially during the 34th National Women’s Encounter, pushing the (all-male) candidates to come out in support of access to abortion. With a growing number of protesters over the years, they have succeeded in putting the issue on the agenda, but are still far from obtaining unanimous support from politicians for a pro-choice bill to liberalize abortion.

Abortion remains illegal in the country, except in cases of rape or when a pregnant woman’s health is at risk, and the backlash is never far away. On November 21, only a few weeks before leaving power, outgoing Argentinian president Mauricio Macri (who had been defeated in the last election), unilaterally revoked a protocol adopted just two days earlier to facilitate access to abortion for minors under 15.

Patriarchy and corruption get kicked in Lebanon

Women are also fighting for their rights in Lebanon, where they are not allowed to pass their nationality on to their children or husband, and significant gender inequality still exists in inheritance, divorce and custody rights. Women are also the first to take to the streets in support of a democratic and more egalitarian society.

The image of protester Malak Alawye Herz kicking a minister’s armed guard has now become a meme. The kick symbolizes both the struggle against patriarchy and against the Lebanese confessional political system. Seen as corrupt, the system has been accused of increasing socio-economic inequalities that affect women first and foremost. In Lebanon and Argentina alike, the mobilization of women, particularly students, has resulted from lengthy groundwork carried out by community organizations.

These women are targets of excessive police repression. Ultimately, women’s presence in the public sphere is rejected, despite their initiatives including occupying public squares, organizing debates with citizens, and forming barricades.

Mobilized but not necessarily heard

In Chile, women activists are also on the front lines, and are paying the price. Since the month of October, 13 women have gone missing and there have been numerous cases of sexual violence and anti-lesbian violence. Protesters are pushing for increased purchasing power for everyone, gender equality in pay, retirement and health benefits, the full legalization of abortion, and legislation recognizing sexual violence.

In Sudan, women also played a major role in the massive demonstrations that led to the departure of President Omar al-Bashir last Spring. The dictatorship had reduced the freedom of these women who had historically been very active in the country’s economy and society. Many are calling for justice for women suffering from sexual violence in Darfur, violence allegedly involving many current public officials.

Protesters also demand an end to the mandatory hijab, the right to free movement in public spaces, and access to employment outside of the home, all currently prohibited under Sharia law. Yet women’s political associations have been kept out of the negotiations with the Transitional Military Council.

The same is true in Algeria, where women protesters have rallied in favor of regime change and to assert their rights. Yet their voices have not been heard, particularly in the reform of the Family Code. Women have also been excluded from the current political transition.

See also:
“The root cause of gender inequality is the role society assigns to women”

Another example is Romania, where civil society is mobilizing to fight government corruption, while also calling for fairer access to healthcare and education, issues that women in particular are championing. One year ago, in Hungary, women led the way in challenging Prime Minister Viktor Orbán and his bill to deregulate overtime, a measure that would penalize women more than men.

Images of movements with a lasting impact

Around the globe, women are fueling democratic and social revolt, and pushing for an agenda that will promote their rights. Among the methods being used, the occupation of public spaces to defy power is particularly symbolic. Images of women taking to the streets have national and international impacts.

Therefore, it is not enough to talk only of “the convergence of societies” rebelling against globalization. To ignore the gender aspect when analyzing recent and ongoing movements is to fail to understand changing democratic demands and the workings of repression.

The traditional categories used to analyze citizen protests must be changed and academic research must be conducted on gender issues. In the midst of social, economic, political and environmental crises, a desire for greater cooperation and solidarity, less vertical hierarchy and domination, and a new form of citizenship is emerging as feminist demands are being asserted. This is a phenomenon that surpasses different national contexts.

Everything seems to suggest that these movements will only increase in coming months, continuing to spread contagiously. Social media provide a sounding board and create a sense of unity among male and female protesters alike, both in democratic societies and under authoritarian regimes. Weariness, a need for change, and a sense of urgency are particularly present among younger generations, especially those who have received a higher education. Yet there is also an intergenerational aspect.

What will be the political consequences of this activism, largely driven and renewed by women? Will leaders propose nostalgic, old order measures, or liberating reforms?

For the time being, the movement has understood the decisive role of women’s rights, on the one hand and, on the other hand, the gender aspect in political rhetoric and policies: populists and nationalists like Donald Trump and Jair Bolsonaro have shown their ability to seize on this.