President and CEO of the World Resources Institute (WRI)

Why should we worry so much about climate change?

Climate change threatens to undermine almost all of the progress we’ve enjoyed, and it threatens poor people especially. So, agricultural yields in Africa could fall by 30%. More than a billion people could be affected by rising sea levels – mainly poor people in the cities of the developing world. And hundreds of millions of people will be threatened by extreme weather events, by typhoons and hurricanes. So we absolutely must address climate change as an urgent problem, because if we don’t, it will not only hurt people, but it will radically hurt our economy; it will undermine our productivity in a very drastic way.

What about countries that can’t afford to fight climate change?

Well, some people say, “We would love to address climate change, but we just can’t afford to; we’re going to have to wait until we have more resources.” Well, this is really a foolish thing to say. The evidence is very clear that whilst it does cost some money, it costs a lot more not to act on climate change. We should think of action on climate change not as a cost, but as an investment.  So, for example, investing in energy efficiency: it’s not free, but it pays back for itself within three or four years. Investing in more efficient cities, more compact cities… Investing in public transportation. It costs money, but it pays back incredibly quickly, not only in terms of the environment, but in terms of the economy because people get to work quicker and cities become more competitive. And so it’s true across the entire economic spectrum.

In rural areas, for example, there are 2 billion hectares today – twice the size of China – which are now degraded land. They used to be forests. They are not agriculture; they have almost no value it seems.

And yet, if we could re-green just 150 million of those, that would bring $100 billion every year to poor people, and it would lower the carbon gap by almost one-fifth. And so we should think of this as an investment in the future. If we don’t act on climate change, our entire economic system is threatened.

What will it take to make the 2015 Paris Climate Conference (COP21) a success?

Well, first, I am very happy that France is the presidency for COP21, because this is difficult stuff. It is very difficult to get the politics and the finance right.

It requires a world-class foreign service that can really engage in the diplomacy.  It requires a deep, deep technical understanding of the issues. It also requires a development assistance, like the Agence Française de Développement, that really understands how developing and emerging countries are thinking. And it requires a vibrant civil society.

Now, what it will require, is that we are able to not only do the detailed, technical stuff, but we need to inspire the leaders of the world. They have got to understand that the future is at stake in a very big way. And they have got to understand that this is actually in the interest of their own citizens, to get a really strong deal. Many of the people who come to negotiate climate deals, year after year, at each COP, don’t come really with a fire in the belly that they need to get a deal.  They actually are not quite often acting in the interest of their own country.

Because I tell you, we could fail, and there may be no deal at all. And if there isn’t a deal, our grandchildren will never forgive us. 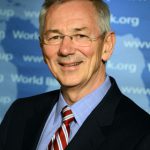 President and CEO of the World Resources Institute (WRI)