Home Politics & Society United States: How do the Sustainable Development Goals Fit into the Democratic Primary?

United States: How do the Sustainable Development Goals Fit into the Democratic Primary?

The primary for the nomination of the US Democratic presidential candidate offers an opportunity to take a look at the way the Sustainable Development Goals (SDG) are included in the main candidates’ policies. According to Marie-Cécile Naves, the candidates have mainly expressed their ambitions to pursue environmental issues. 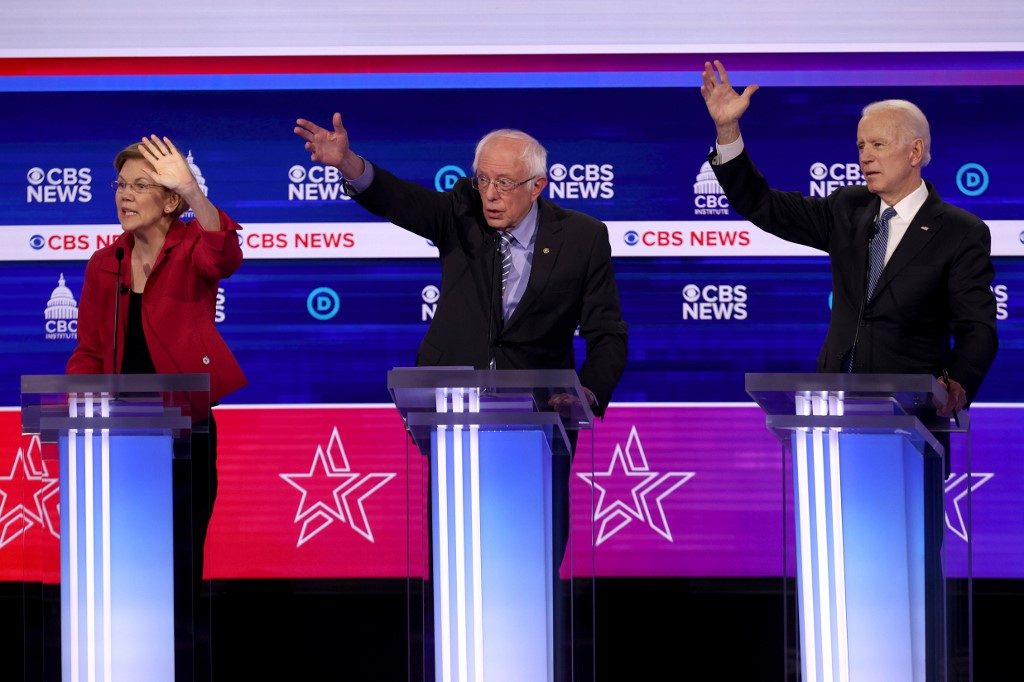 President Donald Trump is running for re-election and makes no secret of his views on these topics. His decisions over the past three years have included the roll back of environmental protection measures established by his predecessor, cuts to social and health care budgets for the poorest (Medicaid), not to mention setbacks in gender equality. As for his campaign speeches, he has simply announced that, if re-elected, this policy will continue beyond 2020.

His potential opponents are currently in the middle of the Democratic primaries and are devoting significant attention to the SGDs, and especially the environment. But the cross-cutting aspect of these plans is still lacking.

Environmental issues are a high priority for Bernie Sanders. The current favorite of the Democratic primary has defended the Green New Deal project ever since it was first presented to the House of Representatives in February 2019 by newly elected officials (including the charismatic Alexandria Ocasio-Cortez). Among its recommendations, this plan proposes to end greenhouse gas emissions over the next ten years and put an end to the use of fossil energies. He also is planning a transition phase for the employees from these sectors.

Supported by the Sunrise activist movement, known for their drastic measures in favor of climate action, Bernie Sanders proposes to invest no less than $16,000 billion in renewable energy, energy efficiency and green transport. His plan would be funded by the sale of the newly produced energy, penalties imposed on polluters and income tax from the 20 million new green jobs the plan would create.

Ranked, like Sanders, on the political left of the Democratic party, Elizabeth Warren also proposes an ambitious environmental plan. By adopting the Green New Deal, the candidate wants to transform the American economic system to make it more egalitarian and “green”. For Warren, this would mean gradual decarbonization, the creation of ten million energy jobs, infrastructure and renewable energy industries. By 2035, electricity production would be 100% clean and renewable.

Elizabeth Warren intends to use tax incentives to encourage the use of electric vehicles and the construction of green buildings and encourage farmers to adopt sustainable working practices. She also proposes a Blue New Deal to protect oceans, lakes and rivers. This would require $2,000 billion in public expenditure over a 10-year period and Warren wants top earners and large firms to pay for this.

See also:
There can be no Green New Deal unless it is global

Before announcing the end of his presidential campaign on March 1st, Pete Buttigieg had endorsed the main principles of the Green New Deal, while also adapting them. The young candidate intended to pursue an economy with zero carbon emissions by 2050 and the development of millions of green jobs. Like Elizabeth Warren, he was in favor of introducing a carbon tax and renewing environmental regulations adopted under Barack Obama, including the Clean Power Plan, which limits CO2 from thermal power plants. Pete Buttigieg also talked of investing hundreds of billions of dollars over a ten-year period in clean technology and wanted to make the United States a world leader in green technology.

Next to these proposals, Joe Biden’s plans for the environment look quite modest. While the former vice president under Barack Obama admits that climate change poses serious threats to public health, the economy and national security, his Clean Energy Revolution seems a little weak. In his plan, national public investments would total only $1,700 billion for a 10-year period. By adding private investments, this amount would reach €5,000 billion. Joe Biden also wants to make the United States “the world’s clean energy superpower”, leading the way in environmental issues. This would include exporting a (currently vague) model for creating skilled jobs in the clean energy sector.

Billionaire candidate Michael Bloomberg, on the other hand, wants to rebuild the nation’s infrastructure using 100% green technology and halve carbon pollution by 2030. His goal is zero carbon by 2050. To back up his criticism of Trump, Michael Bloomberg also wants to restore the United States’ role as a global leader by tackling the climate crisis. Like his opponents in this primary, he acknowledges that the poorest groups and ethnic minorities are most affected by pollution from fossil fuels. He has therefore made his plans for environmental justice a national priority.

Not surprisingly, little attention has been given to foreign policy during this presidential campaign. This year, however, all the Democratic candidates want the United States to rejoin the Paris Climate Agreement to combat climate change. Sanders promotes cooperation with China and Brazil to reduce carbon emissions. Buttigieg proposed ensuring that the US Military set the example on environmental issues. All see ecology as a national security issue.

Few connections with the other SDGs

These ambitious ecological programs contrast sharply with the platform of the Democratic party as established during the 2016 primaries. Since the previous presidential campaign, new scientific evidence pointing to the urgent need for climate and biodiversity plans and the strong, ongoing mobilization of activist and citizen movements have made these topics absolutely essential among US progressives. There is also an added desire to counter the actions of President Trump, who, through his policies and appointments, is promoting an ideology of climate change skepticism and distrust of science.

But beyond speeches and very real plans, there is still a lack among Democrats of practical links between climate issues and the other SDGs. The “Medicare for all” plan supported by Sanders and Warren is one example, as is, for all candidates, the commitment to lower the cost of health services and medication, investment in early childhood and education and defending women’s rights.

Each candidate promises in their own way to connect the fight against socio-economic and “racial” inequalities with environmental protection. But apart from the protection of Native Americans adversely affected by the exploitation of fossil fuels, this all remains vague. However, Buttigieg’s plan for a national green bank to fund $250 billion in projects to benefit disadvantaged populations will be one to follow in the future.

Yet it is important to remember that the Green New Deal philosophy involves a strong cross-cutting aspect. It pursues the ambition of building a grassroots movement that starts with citizens. This potential movement might just provide the social and economic model that could break with productivism, consumerism as a goal and means of expression, and the tendency to prey on others and nature.

These principles are all still defended and implemented by the current president, whose chances of reelection in November are far from slim.

Menstrual Hygiene: The Fight for Human Rights and Dignity