Facebook Twitter Link
Copied to clipboard
In Madagascar, one of the countries in crisis least covered by international media, resident walks carrying a child through floodwaters on a road in Antananarivo on January 8, 2020, after heavy rainfall. (Photo by MAMYRAEL / AFP)

A lack of media coverage on a crisis can have considerable effects: less visibility often translates into less funding and therefore a longer-lasting crisis. What can we do to change this and bring to light the suffering of millions of individuals? Here are a few thoughts.

Ten crises that received the least media coverage in 2019

For the fourth year in a row, the NGO CARE has published a report called Souffrir en silence, Suffering in silence that highlights the ten humanitarian crises that received the least media coverage. For this report, we analyze the media coverage of forty humanitarian crises that each affected at least one million people in 2019. The research looked at over 2.4 million online articles published between January and November 2019 in five languages: German, English, Arabic, Spanish and French.

In 2019, the food crisis in Madagascar made it to the top of this unfortunate ranking, with only 612 media hits. In comparison, the most publicized humanitarian crisis, the conflict in Syria, accounted for 425,000 articles.

But even this is nothing compared to the media hits for Parisian football club PSG, mentioned 2.7 million times in 2019 and the 3.1 million articles about Real Madrid. The Eurovision Song Contest, meanwhile, received over 95,000 hits in the month of May 2019 alone and 166,000 articles were written in 2019 about Oktoberfest in Munich! 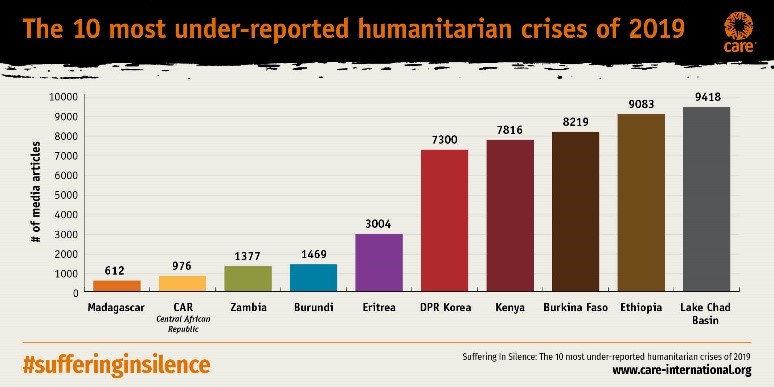 Football and music are of course important social topics. But the millions of individuals suffering from humanitarian crises are equally deserving of public attention.

It is true that a press article cannot equal food, drinking water or medical assistance when it comes to saving lives. However, there is a direct correlation between the media coverage and the funding allocated to a crisis.

Among the ten crises that received the least media coverage according to this report, three were also ranked by the UN among the most underfunded crises of 2019 and six have already appeared at least twice on this list.

The strong link between public information in donor countries and funding from institutional donors, foundations or individual donors demonstrates that drawing attention to a crisis is a first form of humanitarian aid. And yet it is rare for Agence Française de Développement or the Europe Commission ECHO program to contribute funding to communication efforts. A portion of donors’ budgets should be systematically dedicated to informing the public about a crisis, especially when it occurs in countries that already receive little media coverage.

This money could be used to encourage the affected countries to provide greater media coverage for the crisis, to organize press visits to the affected regions, or provide logistical support and training for local journalists.

The Media: choosing to address a crisis is a decisive step

Budget cuts, a decline in advertising revenue and a reduction in the network of foreign correspondents (especially noticeable in the media in Germany and France) has created a vacuum when it comes to the media coverage of crises.

During a disaster, editorial teams are more prone to focus on the death toll rather than analyzing and presenting the underlying causes of the disaster.

The number of people facing emergency situations will increase in coming years and we cannot rank their suffering based on the number of deaths. One example of positive change would be for media outlets to devote a certain percentage of airtime or headlines to forgotten humanitarian crises.

This change could also mean sending one reporter per year to cover a forgotten crisis, organizing a round table discussion on a forgotten crisis to be broadcast in the media, or supporting journalists and media outlets in need of funding by contributing money or skills.

Humanitarian organizations: speaking out for those who have no voice

NGOs try to compensate for the withdrawal of field reporters by offering new content or organizing press visits aimed at denouncing these humanitarian crises.

Young people are increasingly concerned about climate (the number one concern of young Europeans) and humanitarian crises. They demand full, reliable facts as well as more first-hand accounts from those directly affected by these crises through the media outlets they use. They also want narratives that offer hope and solutions. While this is not always possible, attempts must be made to vary the angle of the reporting.

Last year, we saw how one Swedish teenager was able to transform a simple climate event into a global movement that united millions of people…

With the rise of citizen journalism and people across the globe taking to the streets to make their voices heard, there’s no doubt about it: each voice and action counts and can contribute to starting or fueling a movement in favor of a fairer and more inclusive world.

It also up to us, development stakeholders from wealthy countries, to stand aside to let the voices of those less courted by the media be heard. The authenticity of our brothers and sisters on the ground ensures their credibility. 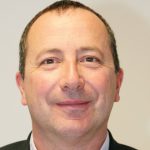