The global financial crisis and the high cost of food mean different things in different places. In those parts of the world where hunger is on the march, their impact can be measured in empty stomachs and blighted lives. That is why, during my recent visit to India, I traveled to a remote district called Chhatarpur in the central state of Madhya Pradesh (MP). I went there because I wanted to see for myself the plight of people in India’s hunger heartland. I particularly wanted to listen to the experiences of the local women. As always in such situations, the women are the ones in the front line of the war against hunger.

So serious is the food-security situation in MP that, when inserted into the country table of the Global Hunger Index, the state falls between Ethiopia and Chad which are among the 10 poorest-performing countries in the world. One third of the children under five in MP suffer from wasting (too thin for their height) and 60 per cent are underweight (too thin for their age), according to India’s most recent National Family Health Survey.

Chhatarpur, in the north of the state, is one of a number of MP districts in the grip of malnutrition. “Severely insecure” is how it is described in the forthcoming Report of Food Security in Rural India, a joint initiative of the World Food Programme and the MS Swaminathan Foundation. Climate change would appear to be contributing to the problem. Persistent drought during the past five years has led to crop failures and cattle losses, driving many farmers into severe debt. A woman called Krishna told me her husband is jobless, their land barren. They have four small children whom they are struggling to feed. So bad is the situation, they have even been thinking of selling off their land to raise badly-needed cash.

This year, as last year, children died from hunger-related diseases in Chhatarpur. Women whom I met told me of the crushing difficulties they face every day in feeding their children. At a Nutrition Rehabilitation Centre where severely malnourished children are nursed back to health, I learnt first-hand about the ravages of hunger. Some of the women had not just one but several malnourished children to care for. The mothers were so busy with looking after their large families and performing endless household chores that, even when they did have enough food, they often did not have the time to prepare it properly and feed it to their babies.

The point about malnutrition, though, is that it is not like cancer. It does not need some new scientific discovery for us to tackle it. We already have the tools to eradicate hunger and history will judge us if we do not use them.

India is home to more than 230 million undernourished people – the highest number of any one country in the world. But it is also at the forefront of the race to produce innovative nutrition technology. WFP’s India operation is currently developing a “smart” nutritional intervention for children of 6-24 months – exactly the age group of children at the Rehabilitation Centre in Chhatarpur.

This new ready-to-use food is made from ingredients such as chickpeas and dry skimmed milk powder with a range of added micronutrients. There is huge scope for this type of nutritional supplement in India which has the highest prevalence of underweight children in the world, higher even that sub-Saharan Africa. This latest addition to our hunger toolbox can be used not just for rehabilitating malnourished children but for preventing them becoming malnourished in the first place.

This product can be made locally and at relatively low cost – a daily ration costs just five rupees (10 cents). Being oil-based, it does not require water for its preparation, giving it a longer shelf life and making it particularly suitable for use in places with poor sanitation. Nor does it require cooking which makes it ideal for distribution in disaster zones – which is why we deployed it as part of our relief package after the recent cyclone in Myanmar.

It has already excited significant interest in the region and beyond. Afghanistan, Nepal and Bangladesh have all expressed interest in making this product part of their national food programmes. When I produced a sachet at the African Union Summit in Ethiopia not long ago, Prime Minister Meles Zenawi said he wanted to start producing locally it in his own country.

I really feel we are embarking on a new age of tackling malnutrition. For the first time, we have a range of products which can deliver the kind of nutritious ‘punch’ that is needed to hit hunger where it matters.

Another initiative that WFP has pioneered in India has been rice fortification. This has huge potential and could be particularly useful in countries like India which has the largest population suffering from vitamin and mineral deficiencies in the world.

Just one kernel of this fortified rice, added to 99 regular rice kernels, gives an undernourished child or an adult all those micronutrients they so desperately need.

Working in partnership with a Dutch company and the authorities in Orissa, WFP is starting on a pilot project to fortify 10,000 metric tones of rice in the eastern Indian state. This will be distributed over a two-year period through the Indian government’s mother-and-child feeding programme, reaching up to a quarter of a million beneficiaries. The idea is that what happens in Orissa will serve as a model for the Indian government to extend rice fortification to other parts of the country.

Micronutrient powder is another intervention we’ve been working on in India. Sprinkled on cooked food, this tasteless powder delivers meals that contain the daily recommended intake of essential vitamins and minerals. Again, this innovative idea has applications for use way beyond India and the South Asia region.

We’re looking at nothing short of a nutritional revolution here, a change in the way we target specific needs and specific communities. Another issue we have been exploring in India is how to improve the nutritional status of people with HIV and AIDS. Working closely with India’s National AIDS Control Organisation, WFP has devised a special fortified food supplement called ‘NutriPlus’, made from wheat and full-fat soya. Pilot projects in Orissa and in the southern Indian state of Tamil Nadu are now leading the way in the nutritional care of this particular sector of society in India.

Such new products and initiatives come at a crucial moment. In this time of financial crisis and high food prices, people make cut-backs where they can. What goes first is the nutritional content of a family’s diet. My experiences in Chhatarpur and elsewhere in the world have shown me that, when push comes to shove, vulnerable people either cut down on the number of meals they eat or reduce the servings of food. This is particularly hard on children and babies who need that nutrition and those minerals to grow up into healthy, fully-functioning adults.

If we can target the most vulnerable – particularly young children – with tailored nutritional interventions during the crucial early months of their lives, then we will have gone a long way towards winning our battle against malnutrition. 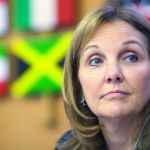