Every year, the World Bank publishes the Country Policy and Institutional Assessment (CPIA) report on Africa. In an exclusive interview, Shanta Devarajan, Chief Economist of the World Bank’s Africa Region, talks about the interest of the study and the benefits that this data offer African countries in the current global climate.

Can you tell us about the CPIA, its rationale, structure and objectives?

Every year, the World Bank’s (WB) CPIA (Country Policy and Institutional Assessment) report assesses the quality of its member countries’ policies and institutions. The information that is provided helps in the allocation of resources to the poorest countries which are members of the International Development Association (IDA) [part of the WB Group]. It should be mentioned that the CPIA is not only a mine of useful information for aid allocation, it also allows local development stakeholders to follow the development of economic policies and institutions in their countries and provides input to national debate on these issues. It would, moreover, be beneficial to scale up our effort to widely disseminate its content in order to give as many civil society stakeholders as possible easier access to it. Our aim is to promote initiatives and help these stakeholders take ownership of the data so that they can make a better self-assessment. We have considered this during the CPIA forums organized over the past three years (workshop gathering civil society, academics, the private sector and government representatives). During these forums, we give them all our information and criteria and encourage them to assess their own CPIA. The comparison of our results gives rise to extremely interesting and fruitful debates. We welcome the fact that our partners show a lot of enthusiasm. Many countries have already set up their CPIA units, one example being Gambia. We held discussions with them from Washington via videoconferencing in order to help them improve their CPIA. This is mutually beneficial, as on our side it helps us to obtain first-hand information for the preparation of our CPIA.  We include the endogenous points of view and analyses from civil society stakeholders (stakeholders from associations, opinion leaders, etc.) in it.

In terms of structuring the study, we have established 16 criteria grouped into four clusters (areas): economic management, structural policies (foreign trade, public finance), equity policies (education, health, gender equality) and good governance (accountability and transparency). These criteria are agreed by consensus among economists who consider they are essential for development and are therefore the purpose of the CPIA. We give a rating scale from 1 to 6 and criteria at each level. Our approach is therefore not so much about making a value judgment – although ranking a country between 3.1 and 3.2 may give this impression – but about proposing classifications for which we use substantive criteria.

Despite a difficult economic context in Africa, experts at best highlight an improvement and at worst stagnation in most countries. Do you share this relatively optimistic analysis?

We have seen that 13 countries have actually improved their overall rating. 5 or 6 have been downgraded and it is important to compare this fact with the global crisis. Here again, opinions differ: some people tell us that Africa is not connected to the international financial market and, consequently, it is not surprising that there has been less impact on this continent and that it is continuing to experience growth during this crisis. In my opinion, even if most African countries are not directly linked to the financial market, and therefore to its recent downturn, they still, however, remain tied to and dependent on the international trade market, especially for commodities. If the euro crisis leads to a deeper recession than the current one, this situation will have a negative impact on African countries, as we saw in 2008/2009.

In 2009, Africa’s growth rate fell from 5% to 2%. A 2% growth rate for a population growth rate of over 2.3% is a negative result. The most positive improvement we have seen is with the so-called “economic management” cluster. African political leaders pursued prudent budgetary policies during the decade prior to the crisis. Following the onset of the crisis, these leaders could well have broken away with their prudent or restrictive policies and returned to a high budget deficit in order to maintain or stimulate growth. However, they did exactly the opposite by continuing to take a prudent approach and therefore saw a slight upturn in growth and a fiscal deficit, which rose to 1 or 2% for countries with fiscal space. Some countries have continued and accelerated their national reform programs. The prudent policies conducted in the past have allowed them to create more room for maneuver during the crisis. This is the main lesson that African leaders and populations have learned from this crisis.

To what extent do you consider that the information collected from these countries is reliable and complete?

The process begins with discussions with the country (government technicians and civil society) on the database. These exchanges concern the reliability and relevance of this data. Once we have reached a consensus, we use this base for the assessment of the CPIA, but we add our assessment as the data sometimes give inconsistent and diverging directions which we must try to explain. For example, accelerated growth may be accompanied by a very small reduction in poverty. It is then necessary to interpret this phenomenon and make a more in-depth analysis of the specificities of the country. Another important point is that we do not only use the data from the country; we also use the data from comparable indices between countries, because the CPIA exercise is above all a comparison exercise. Each country will tend to think that it has the best performance. We bring it back to the reality of the facts and figures by comparing its performances with those of its neighbors (for example, in the case of Tanzania, we compare its results with those of Malawi and Kenya while, of course, taking account of the specificities of each country). Indexes such as the Mo Ibrahim index [index to assess African governance] or Transparency International [Corruption Perception Index] are very useful to us in this respect. We (WB) do not use these indexes without discernment, in a mechanical way, we include them in the database so that we can make our judgment as objective as possible.

You spoke about countries which establish their own CPIA indexes and units, does this decision come about through a national will to take their destiny in their own hands or to show their disavowal of WB rating policies, the impartiality of which is sometimes contested?

The example of Kenya is extremely interesting. We agree with its technicians on the country’s level of economic management as it is based on objective data, such as the budget deficit and inflation rate. However, our differences reside in our assessment of corruption and transparency. Kenyan leaders think that the WB’s rating of Kenya is influenced by adverse publicity from the recurrent corruption scandals in their country and criticize the fact that certain neighboring countries with the same level of corruption do not suffer from such a disastrous reputation. During this discussion [presentation of the new CPIA report], I told them that the perception from outside is already an indicator in itself and that they must take action in order to improve or change this perception if they consider that it is exaggerated or removed from the reality. The creation of national CPIA units like in Gambia does not undermine the WB’s work in the field. It creates an opening. In the past, we only used to work with governments, it allows us to diversify our partners. In Kenya, a representative from an NGO told us about his wish to assess the CPIA for each region in the country, therefore to prepare a more decentralized study and using our criteria. The aim was to compare his results with ours for aid allocation decisions. Nigeria would also appear to be interested in a CPIA for its regions.

In your opinion, what are the obstacles to the success of economic reforms in the African countries in question?

First of all, we agree that economic policies and institutions are important for development. Second, it is also true that it is difficult to reform economic policies and institutions as it is an extremely sensitive politically issue. For example, rent is likely to be lost if the decision is taken to suppress taxes or reduce the tax base. For these difficult, but sometimes necessary, reforms to be achieved, national consensus must be obtained, not in Washington or Paris, but in Kinshasa, Nairobi or Abuja. How is this consensus achieved? From my experience, consensus requires an open debate whereby the vast majority of citizens are informed that it is being held and participate in it. Governments that impose a reform without an educational approach, without inviting citizens to take part, generally fail. This debate must be based on evidence and the CPIA is precisely a contribution that provides input to this debate. Once again our aim at the WB is not to lead the debate, but to provide input to it. My only wish is that the perception of certain realities of the CPIA are accepted and shared and that we can go further with a debate that it is, we have to admit, often rhetorical.

You say that African people are the most unbanked and that banks prefer to lend to governments rather than develop access to microfinance. What role must international donors play in this context?

To my mind, among the challenges ahead for Africa, the transfer of knowledge is more important than money. By this I mean banking sector regulation and reforms. In many countries, we have nationalized banks which have become a source of rent, but they lose a lot of money and place a burden on the microfinance and mesofinance sector, which can help the poorest households. If we can help to reform these banks, or even close them in some cases, and leave the banking sector a little more liberalized (but not too much), so that we do not encounter the problems of the EU or UK, which are over-liberalized, a little more deregulation may be a good option for the African banking sector. 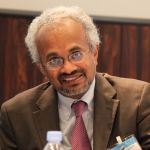