The crisis in Syria led to an influx of at least 1 million Syrian refugees in Lebanon and 651,000 in Jordan, prior to drawing Turkey and Greece into the turmoil. Syrian refugees now account for about 18% of the Lebanese population. This situation obviously has an impact on access to work, basic services and, more generally, the country’s development challenges. Sami Atallah, Executive Director of the Lebanese Center for Policy Studies (LCPS) in Beirut, takes a close look at this situation and at what welcoming these immigrants involves, for Lebanon as well as for Europe.

What is the most striking aspect of the way in which Lebanon is handling the Syrian migrant crisis?

The fact that the Lebanese Government has not really known how to manage the crisis! The number of refugees has increased and the political elite has not known how to, been able to, or wanted to manage the problem. In 2014, access to Libya was restricted for Syrian migrants, with access conditions: they needed to have a job, prove that they could afford to pay if they were coming to Lebanon for healthcare, etc. This is the only significant measure taken by the Government, without there being any sign of real political changes in Lebanon. That being said, we must recognize the work done by the Ministry of Education to integrate Syrian children and send them to school.

Much remains to be done to manage this crisis and to have a clear vision of the path which we will need to take over the next ten or fifteen years. One example: we do not know exactly how many Syrians reside on Lebanese soil. The United Nations High Commissioner for Refugees (UNHCR) mentions the figure of 1 million Syrian refugees registered in Lebanon, but the number is much higher (Editor’s Note: the figure of 1.5 million people is generally accepted at expert meetings). This has a strong impact on a population of 4 million Lebanese, which is mainly managed by international and local NGOs.

Read on this subject on ID4D: “Syrian refugees: Development assistance in Lebanon and Jordan must be unconditional”, by Haneen Ismail Sayed, World Bank Program Leader for Human Development in Lebanon, Syria and Jordan.

What research does your center conduct on Syrian migrants?

We study the consequences of the Syrian migrant crisis on the lives of communities in the field with, in particular, conflicts over access to services (water and electricity) and employment.

We also focus on the survival strategies of Syrian migrants in Lebanon, the networks they use to get by in Lebanon, we try to find out who is competing with who on the labor market, for example.

The findings of our field surveys lead us to very nuanced conclusions, a long way off binary thinking in terms of “good” or “bad”, or “negative” or “positive” impact. One of our surveys was conducted in six towns with 1,200 people. It showed that Syrians are also in competition between themselves on the labor market in Lebanon, and that they put pressure on the less qualified Lebanese, but not on the more qualified professionals. Furthermore, perhaps we do not mention it enough, but Lebanon has returned to growth, in particular thanks to the consumption of Syrians (2% of growth in 2014, 2.5% in both 2015 and 2016, according to the World Bank).

Syrian migrant crisis : The analyses do not take the realities into account

What do you think about the idea, recommended by the HCR and World Bank since February 2016, of moving towards a development strategy and no longer only having a humanitarian aid strategy in order to address the Syrian migrant crisis?

We do, indeed, need to go beyond the humanitarian aid approach and tackle the root cause of our structural problems, which are a barrier to development. These problems existed in Lebanon before the arrival of Syrian migrants, and have got worse since, particularly from an environmental perspective in the Bekaa regions, where there are the largest Syrian refugee camps. Unemployment or access to water and electricity pose a problem to both Syrians and Lebanese. The lack of jobs in Lebanon drives both our own nationals and Syrians to look for work in Gulf countries…

On the other hand, some people in Lebanon benefit from the Syrian migrant crisis, because migrants consume and redistribute wealth. The situation is more complex than it seems.

Lebanon, Jordan and Turkey have made tremendous efforts, which go above and beyond their capacities, to welcome refugees and address an international crisis which requires large-scale and more appropriate action. And for the time being, many actors have not been up to the task…

Is the way in which Syrian refugees are received in Europe subject to debate in Lebanon?

No, it isn’t. The main debates focus more on domestic policy issues. However, there is a more general discussion about the way in which donor countries, including Europe, react to the crisis. In my opinion, we need to consider this problem from a broader perspective, as everyone is concerned. Beyond the mere welcome of immigrants, the emergency lies in providing better services, creating jobs and building infrastructure. We try to put the real challenges on the table, at our level, so that problems about roads and electricity are discussed, rather than the responsibility of Iran or Saudi Arabia in the present situation in the Middle East. Our political elites readily take up such arguments to help cover up the fact that they are unable to deal with the crisis and provide the basic services which populations need.

What are your recommendations to European policymakers?

To simply help Syrian refugees. The fear engendered by migrants in Europe seems completely excessive and, honestly, disgraceful, when we see how Syrians are viewed and treated – as if they were thugs or a threat. It is sad to see that the EU, which carries the torch of human rights and the fight for freedom, is capable of holding such low-down discussions about Syrian refugees. In my opinion, Europe has failed before the rest of the world in terms of principles.

Secondly, it makes common sense to find a solution to war and conflicts, so that people can stay at home and build a future for themselves. This issue goes beyond the case of Syria and also concerns Latin America and Africa.

Thirdly, donor countries need to ensure that all the aid earmarked for Lebanon and Jordan goes through the right channels and reaches its beneficiaries, avoiding corrupt practices and possible misappropriation. I am not saying that our governments should not be in the driver’s seat, working hand in hand with national NGOs and local authorities. However, for aid to be effective, we do need to ensure that transparency mechanisms are in place.

Finally, the European Union should open its borders to exports from Lebanon and Jordan. This is a far more effective way of supporting us on the economic front and of creating jobs.

Syrian migrants in Lebanon: “Let’s channel the aid through to the beneficiaries”

What would be your recommendations to Lebanese policymakers?

To take things more seriously and manage this crisis. We lack leadership and vision in order to build a consensus which could subsequently support donor countries. We need to know what the role of each actor is – government, NGOs, local authorities – in the context of an overall roadmap. The problem goes far beyond money. It is not enough simply to say that you have been to a conference in London to receive so many millions of dollars, with a given number of documents produced… 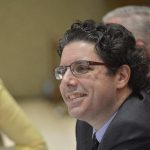