Senior Economist at the World Bank

Released in February 2016, a joint report by the World Bank and United Nations High Commissioner for Refugees (UNHCR)  recommends, on the basis of the case of Syrian refugees in Lebanon and Jordan, a new approach to dealing with refugee crises. It involves taking measures, right from the onset of these massive population inflows, based on both humanitarian action and development aid in the host countries. This is what is explained by Paolo Verme, a senior poverty specialist in the World Bank’s Economic and Social Development Division for the Middle East and North Africa, and one of the authors of this paper.

What has happened since the release in February of the joint World Bank-UNHCR report on the Syrian refugee crisis in Lebanon and Jordan?

The second point is that the World Bank is conducting a joint program with UNHCR to improve data collection, management and analysis. UNHCR has understood that the data it has on refugees are underexploited. Our software allows them to be more effectively analyzed.

Syrian migrant crisis : The analyses do not take the realities into account


Do concrete actions combined with financial commitments follow the approach that you recommend, moving from humanitarian aid to development aid?

A general consensus has emerged among donors and multilateral organizations to see humanitarian and development operations begin right from the onset of crises – and not only for the case of Syria. Refugee crises are now perceived over the long term, with the need to prepare an appropriate response right from their onset.

In February, in Paris, we – myself and Ewen Macleod, Head of the Policy Development and Evaluation Service at UNHCR in Geneva – presented a joint paper in which we addressed the way in which to deal with the Syrian refugee crisis. We spoke about new management instruments and a set of specific policies to support refugees and communities affected by their presence (to promote the economic integration of refugees and not assistance, with, for example, a policy for housing outside camps with a controlled system of low rents to be negotiated with the owners, as a substitute for direct humanitarian assistance). We presented a growth model for the regions affected.

It is a complete change in approach for humanitarian and development organizations. The first concrete measure taken by the World Bank concerns a financial instrument which allows Lebanon and Jordan, which host a large number of refugees, to access loans with very low interest rates, close to zero, in the same way as the least developed countries (LDCs), whereas they are middle-income countries (MICs). Donors have agreed to pay the difference in the interest rates between these two categories of country in the case of Lebanon and Jordan. A more complex financing policy remains to be built, which starts with grants and includes microloans to enterprises and loans to large investors.

The second concrete measure designed to respond to the Syrian refugee crisis is the establishment of special economic zones (SEZs) in Jordan, to give enterprises facilities in terms of taxes, investments and access to European and American export markets, in return for recruiting refugees in order to include them in the labor market. Pilot projects have been set up in Jordan.

Are these measures intended to ensure that Syrian refugees stay in Lebanon and Jordan, and are not tempted to go towards Europe?

The SEZs established to facilitate their access to the labor market aim to maintain these ties with Syria, by giving them the economic capacity to restart their lives when they return. The more we invest in Lebanon and Jordan, the more we allow refugees to be independent, and the more chances we will have of seeing them return in better conditions.

Syrian refugees: “Development assistance in Lebanon and Jordan must be unconditional”


Did you use forward-looking scenarios for your joint report with UNHCR, in order to assess how long the Syrian crisis might last?

No. When started working on this crisis, in 2012, the idea which prevailed was that a reconstruction process would begin in two or three years. It became clear that this scenario is not realistic. We consequently changed strategy. The situation remains unclear over the prospects for reconstruction and the return of refugees. We remain on standby, without any way of knowing when the conflict will end.

However, we carry out actions to integrate Syrian refugees into their host societies now. We have already lost considerable human capital over the past five years, in terms of qualifications. We must not lose an entire generation. It is necessary to focus on refugees where they are now, we have no choice for the time being. Humanitarian organizations are better equipped to do this than the World Bank. By contrast, we know how to work for reconstruction, as we have done this in a number of countries around the world in the aftermath of conflicts (Lebanon, Afghanistan, Angola, Mozambique, Liberia, Sudan, Central African Republic) or natural disasters (Cambodia, Indonesia, Haiti).

The big question is to know when this reconstruction will begin. We cannot afford to wait, as the history of previous refugee crises shows us that they can sometimes last 40 or 50 years, as with the Palestinian crisis. In the short term, UNHCR can ensure the social protection of refugees and, in the long term, the World Bank is equipped for reconstruction and development. Yet there is a void in the medium term, a period for which no one is qualified: we try to fill this void between the humanitarian short term and the long term, which is identified as a moment of reconstruction. In the middle, the period can last a generation or two, which we cannot afford to lose.

The Palestinian example is extremely interesting. The first generation of refugees was absorbed as citizens in Jordan, after the Second World War. Another generation of refugees, which later fled to Syria, Lebanon and elsewhere, has not been integrated in the same manner. It lives in enclaves which have caused a lot of political, economic and social problems. This is a generation without a status or government. They are no longer in an emergency situation, but are also not citizens where they live.

Are the funding pledges obtained in Washington to support Jordan and Lebanon sufficient?

It is a difficult question, as we can wonder whether these funds will actually be allocated. Past experience shows us that pledges are never 100% respected.

What personal lesson have you learned from the Syrian crisis?

The main lesson is the following: if we look closely at humanitarian crises, and those of refugees in particular, the defeat would especially appear to be that of development. In the specific case of Syria, one of the causes of the crisis was the drought which affected the country and caused population displacements, without an appropriate response. Another level of development would have made it possible to more effectively prevent the crisis, even if it has also had extremely strong political factors.

Many political crises have economic roots which we are not used to considering as such. The economy is either the cause or the consequence of the refugee crises which must concern us. Two years ago, the World Bank was not really working with refugees. The psychology has changed with the joint report we have produced and the visibility of the refugee crisis in the press. A refugee is no longer only synonymous with UNHCR and social protection. There is now, in addition, the economic growth factor. Furthermore, the World Bank is implementing an increasing number of projects on refugees, in Southern Sudan, Somalia, Rwanda, Uganda, Ethiopia and Nigeria.

Syria: “One of the three reasons why migrants leave is to find electricity, after security and employment!”


Does the World Bank have a responsibility in the Syrian crisis, which it is accused of by some critical voices, due to programs to liberalize the economy conducted prior to the crisis?

The World Bank had very few relations with the Syrian government prior to the crisis and there were very few projects. The liberalization process may also have had a positive impact, regardless of the World Bank and donors. It is extremely difficult to evaluate its impact. However, we do know a little more about the consequences of the drought, which displaced over 1 million people and created discontent in the urban areas where they arrived.

What progress do you hope to achieve?

The relationship between the World Bank and UNHCR is important, as these two organizations drive all the others, in their respective spheres of development and humanitarian action. From the technical point of view, we very much promote the establishment of more institutional ties to manage refugee crises, with a positive impact on results. 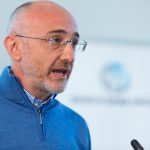 Senior Economist at the World Bank