Head of Beyond peace

The closure of schools for a few months in the context of the Covid-19 pandemic was experienced as a challenge in many countries. Meanwhile, in Anglophone Cameroon, some 850,000 students have been denied school for the past four consecutive schoolyears. Why has education become the focus of the confrontation between the authorities and the Ambazonian groups?

The roots causes of the crisis in Cameroon

Cameroonians like to refer to their country as Africa in miniature. But what makes it really special, in addition to the 271 nations that make it up, is that it has experienced on its territory two different colonial powers and styles. While one side experienced British self-rule, which acknowledges the communities’ aspirations for self-government, the rest of the country experienced the centralizing model of the French nation-state. The two, different educational systems (anglophone and francophone), were maintained at independence in the early 1960s, as well as façade bilingualism. The State engaged in two strategies, one official (bilingualism) and the other unacknowledged (assimilation of the Anglophones): both failed, leading to the current crisis.

The heavy-handed Government crackdown in 2016 against peaceful protests organized by Anglophone lawyers and teachers to oppose the increasing erosion of their institutions and way of life, led to the escalation into armed conflict. Since then, have been widely followed by the anglophone population in defiance of government policies. The closure of schools, meanwhile, is forcibly imposed by armed groups, who declared a boycott of the educational system as part of their struggle against the government and its institutions.

There are now 600,000 displaced persons according to the UN, and more than 90% of schools remain closed in the anglophone (“NWSW”, or North-West/South-West) regions. More than 200 schools have been attacked and several are occupied by government forces or armed groups. Meanwhile, teachers and students have been threatened, kidnapped, and beaten.

Locally, communities have set up—sometimes with the help of unemployed teachers or local clergy—makeshift schools as discreetly as possible. Their purpose is both to teach out-of-school children how to read and write and to protect them from forced recruitment by armed groups or from wandering in the bush. But these clandestine schools often face reprisals from armed groups and even from the authorities. The absence of schooling for hundreds of thousands of children has become a propaganda tool for both sides of the conflict, neither of which is giving priority to returning to school.

The majority of out-of-school children lack the means to flee to the safety of cities or to other regions. Violence and the lack of schooling expose them to additional risks such as the search for income through illegal activities (cross-border trade) or even criminal activities (kidnapping, theft, prostitution); forced recruitment by an armed group; and exactions by the armed forces, who suspect them of being Ambazonians. Meanwhile, because of the large number of deaths, many girls must now take care of their younger siblings. They are also victims of sexual assault by both armed groups and government forces. There are also frequent reports that some girls have joined the armed groups .

The intransigence of the Ambazonians is met with that of the authorities, and the armed groups that had declared a school boycott were caught in their own trap. Their strategy has proved disastrous for anglophone students and for the future of the anglophone community (20% of Cameroon’s population).

How to solve the school closure dilemma and get children back to school?

The language issue is at the heart of the crisis because it is linked to the issue of governance. By trying to expose this issue, the Ambazonians have increased the suffering of the Anglophones, whom the authorities have proved unable to protect. Violence and loss of trust on both sides are so entrenched that a mediation appears to be necessary.

Religious leaders (Cardinal Tumi’s interfaith initiative in 2018) and civil society (Anglophone women’s organizations) have launched a number of initiatives aiming at consultations that would take into account the social dimension of the crisis, but these initiatives has fallen upon deaf ears in government circles and been met with threats by the Ambazonians. The few attempts at international mediation (offer of Swiss mediation, Africa Forum) have not yet put the access to education on the agenda.

To stem international pressure, the Cameroonian government organized a sham dialog in autumn 2019, where it imposed its own format, participants, procedures, and outcome. The exercise was and as “cosmetic concessions to international diplomacy.” One of the main outcomes is the adoption of a special statute for the anglophone regions. However, the measure lacks credibility because of past experience: the government had proclaimed decentralization and multi-party rule in 1996, but this led to no change for the people of Cameroon, a centralized country led by Francophone elites supporting a president for life.

Moreover, the new law provides for the creation of elected bodies to administer local and regional areas while maintaining the prefects (non-elected officials who represent the central government), thereby running the risk of a return to the administrative anomaly of the 1960s. At that time, the Anglophones were very frustrated by the persistence of the position of regional federal inspector, responsible to the federal president, whose decisions systematically superseded those of the elected prime minister of Western Cameroon.

As for the armed groups, faced with the silence surrounding this conflict and the repression in the anglophone regions, they surmised that the school boycott was their main lever for future negotiations. “We want a solution, not normalization,” says Ebenezer Akwanga, leader of the Southern Cameroons Defense Force (SOCADEF), one of the main armed groups.

For the time being, a ceasefire is needed to relieve the population and to create the conditions for an inclusive, structured and participatory dialogue that will help resolve this crisis without neglecting its root causes. There is an urgent need to support the ongoing efforts in this direction. 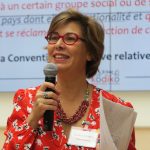 Head of Beyond peace