A major role, a minor place

According to witnesses of the great drought in the Sahel region in the 1970s, women and children were the first victims. Sahelian women are chronically weak; most of them are illiterate, were married at a very early age with, among other things, a large number of dependent children and limited access to basic services. Yet they are heroines of the fight for survival. We know that they largely orchestrated what we now call resilience. They are the ones who, over the years, have built the capacity of households, families and communities “to face uncertainty and the risk of shocks, to withstand and respond effectively to shocks, as well as to recover and adapt in a sustainable manner”, according to the shared definition of resilience of the Global Alliance for Resilience (AGIR) – Sahel and West Africa.

Still today, in Sahel countries, it is generally women who handle lean periods by carefully managing food stocks, creating small income-generating activities and developing various solidarity mechanisms. 68% of all employed  women work  in the food system and an increasing number in off-farm activities: they now account for 88% of the workforce in street food services, 83% in food processing and 72% in food marketing.

[display_quote quote=”In both the economy and in the face of crises, Sahelian women play a central role, while their social position remains marginal.”][/display_quote]

While the employment rate for women in Sub-Saharan Africa (59.3% according to the International Labour Organization in 2017) is the highest in the world, the vast majority of women work in the informal economy: they have low-paying jobs and their financial autonomy therefore remains limited. “In the eyes of the community, women remain under the guardianship of  their husbands or, if they are not married, that of their brothers or eldest sons… they have only a subsidiary role in relation to household responsibilities and are relegated to the side-lines when it comes to community-based management”, explains a research report by the NGO Oxfam published in 2014. Such deep-rooted perceptions, discriminatory attitudes and customary practices persist. According to the report on Gender Inequality in  West African Social Institutions published in March 2018 by the OECD’s SWAC Secretariat, 17% of West African men think that it is unacceptable for women to work outside the home and 21% would prefer that the women in their families stay home rather than work at paid jobs.

If similar studies had been conducted in 1974, they would have led to the same conclusions. In both the economy and in the face of crises, Sahelian women play a central role, while their social position remains marginal.

Progress in the rights of Sahelian women essential

Over the past 30 years, in certain fields and in certain countries, there has admittedly been some progress. Governments have strengthened their commitments to equality at work. For example, Côte d’Ivoire, Mali and Sierra Leone have adopted laws establishing equal pay for equal work. In 2017, the members of the Economic Community of West African States (ECOWAS) approved a set of recommendations to update the Supplementary Act relating to Equality of Rights between Women and Men for Sustainable Development in the ECOWAS region.

Demography and education: allies or enemies?

However, even when the law guarantees a right, customs often prevent or restrict its application. These include the right to education, the right not to be forced into marriage and too young, the right not to be mutilated or beaten, the right to own land, the right to inherit, etc.. The granddaughters of the women who experienced the Sahel drought in the 1970s, still have a long way to go to enjoy the same rights as their brothers. According to UNICEF, the illiteracy rate for girls aged 15-24 is 85% in Niger, 66% in Mali and 54% in Chad. . These countries also hold the worst scores for early marriage worldwide, and most of their women of childbearing age have a high number of children. A woman in Niger had an average of between 7 and 8 children in 2016. How can we fail to miss the link between education and women’s empowerment?

For Sahelian women to take their rightful place

What can be done to address this situation? Certainly not give lessons. Lessons received from third parties have never changed mentalities, quite the contrary. It is up to Sahelian and West African women to fight this battle: to free themselves of the social marginalisation in which they are retained with their children, to obtain recognition for the key role they have been playing for decades in their societies and to have more influence on public and private decision-making. However, the liberation of women will only come about if the policies required to allow them to improve their situation are put in place in Sahelian countries. And this requires both financing quality education and a greater participation of women in political decision-making. 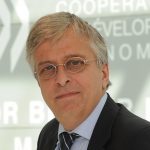