What is the best analytical framework for measuring trends in inequalities in countries in the Arab world and Middle East? What is your assessment of inequality, particularly in Egypt?

There is what we call the paradox of inequality in Arab countries. If we use the Gini Index, the most well-known indicator for measuring inequalities, we see that they are generally declining. But if we refine the analysis with a study of small groups, inequality increases between residents of rural areas and residents of urban areas, between those who have an education and those who do not. Certain factors increase inequalities. If we want to be optimistic, we can use the Gini Index. But if we really want to be able to conduct effective policies to reduce poverty, we need to determine which social groups are vulnerable and target them precisely.

Gender issues are one of your areas of research. To what extent does inequality affect women particularly?

I can really only speak about the situation in Egypt, which is the one I am the most familiar with. Generally speaking, women participate less in the labor market than men. They have trouble finding a job and when they do find one, it is often an informal or precarious job, or a position at a lower level and with a lower salary than a man’s. One would think that a more educated woman would find it easier to access employment or credit. But here again, there is a paradox: the most educated women do not accept informal or precarious jobs. In this case, education is not the main factor which influences inequality. The root cause of gender inequality is the role and place which society assigns to women. It is not simply a question of social classes, but of culture. Throughout countries in the Middle East and North Africa, labor market participation rates for women are among the lowest in the world, whereas access to primary and secondary education is almost the same for boys and girls.

Becoming a lecturer was a choice. The academic environment allows me to work on my research issues and be in contact with new generations, those who are the future of this country. Like other women, I’ve achieved a position of responsibility. This is essential so that the following generations have models.

But I would like to draw attention to the fact that certain sectors are more attractive than others for women. In reality, society accepts that certain positions are held by women, in education in particular. Furthermore, many women prefer to work in the public sector (university, administration, government…), as they benefit from favorable social measures and more flexible hours to manage their family life. In the 1960s and 1970s, the public sector was much larger and there were more women working in it. It has since grown smaller, which has affected the employment rate of women.

You write that a female head of household is often a contributing factor to impoverishment. In what way does the standard of living of the household depend on the family structure?

Generally speaking, a female head of household is more vulnerable to poverty, because she has limited access to the labor market and resources such as land and credit. However, she can profit from social benefits or transfers.

Studies have shown that with equivalent income and power, a female head of household focuses more on the health and education of her children. The man, who is often less concerned about these issues, will tend to spend money on himself, or in certain Middle Eastern countries, on supporting another wife. For this reason, social assistance programs always prefer to entrust money to women.

Water: “Women and men have differential roles, rights and responsibilities”

Is there growing awareness at the political level and in civil society of issues related to gender inequality? Has the Arab Spring broken down barriers?

Since the revolution, there has been greater participation by women in committees to define economic or political measures by the government. Many administrations and ministries are seeking to integrate the dimensions of gender and take women’s views into account in policies. Eight of thirty-three ministers in the current government are women, i.e. almost 25%. This is a record for Egypt!

Civil society is mobilizing on certain subjects, like harassment, as this has an influence on the participation of women in the labor market. There is more demand for child care services in companies to allow women to work. The gender issue is also increasingly addressed in the media. This is important, not only for women, but for everyone, as their emancipation is a potential factor for the development of the household economy and society. In reality, there have been some improvements, but much remains to be done.

How do you feel about the progress achieved in women’s rights in Tunisia?

Tunisia is a model in the region for women’s rights, particularly for rights related to marriage and children. But I am not sure that it can be replicated in Egypt, a conservative country where men hold considerable power in society, especially concerning these issues.

How can we make progress towards equality?

We need to work on everything that can change the culture and stereotypes on women, in the media, in schools and universities. Young girls need to be informed of their rights very early on. But it’s not only women who need to be engaged: it’s essential to include men and encourage them on this subject. There’s a need for everyone concerned to work together: government, universities, civil society, but also the Muslim and Christian religions. Religion is not directly at issue: to my knowledge, religion does not prohibit women from working or impose fewer rights and more duties on them than on men. People often do not make a difference between tradition and religion. But tradition and culture carry a huge weight. For example, in Egypt, depending on the religion, women can inherit land, but preference is traditionally given to bequeathing it to a male relative, who will pay her financial compensation. Tradition often takes precedence over laws. Much needs to be done at the legislative level, but the most difficult thing is to change mentalities.

“Zombie facts” to bury about women and girls

Are you optimistic about changes in society on these issues?

I am optimistic when I count the number of female ministers or when I see my female and male students getting involved in these subjects and trying to influence the life of their community. I attend ministerial and high-level meetings on these subjects: recommendations from research can be taken up by politicians.

I also work with international organizations on mainstreaming gender issues into access to water and food security. International cooperation is extremely important. From 9 to 11 October (2018), in the context of its 10th anniversary, the Union for the Mediterranean organized a conference on “The role of women in building inclusive societies in the Mediterranean”. Three generations of women from the Sciences-Po Women of the Future Program met to discuss gender issues and talk about the participation of women in public, economic and civic life. This exchange of experiences among Tunisian, Lebanese, Jordanian and Turkish women motivates us to take into account the specific social context of each of our countries. 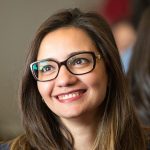