Facebook Twitter Link
Copied to clipboard
As the leading port in Europe, Rotterdam has been preparing for rising sea levels for years. Its adaptation strategy serves as a model for many cities around the world.

For the Netherlands, the effects of climate change are already just around the corner. Rotterdam is on the front line in the face of rising water levels, as 80% of its surface area is below sea level. For years, Europe’s largest port has been preparing for this, as has the entire country which was marked profoundly by the terrible flood of 1953 that killed more than 1,800 people. Ahmed Aboutaleb, Mayor of Rotterdam since 2009, has made the issue a priority. The city is also a model for many others around the world. While in Paris, he explained to ID4D how Rotterdam is actively seeking to prepare for what appears to be inevitable.

Rotterdam is largely considered abroad as a model in terms of adaptation. Why?

Rotterdam started to work on climate adaptation more than a decade ago. As it is a delta city, we have to deal with the challenges caused by climate change. We developed an approach that helps us not only to tackle these challenges, but also simultaneously work on a better city; to become adaptive and attractive, so to speak. This approach called ‘resilience by design’ (the notion of resilience is included in the early stages of design, Ed.) goes with actions on the ground, which makes that Rotterdam is becoming a “showroom for innovative urban adaptation”.

We do have a strong narrative and a strong experience on this issue. Rotterdam is a member of city networks such as the organization Global Resilient Cities network (former 100RC) and C40. We have already organized several big international conferences, through which we exchange our experiences. This nowadays results in 70-80 incoming delegations on a yearly basis.

And we strongly believe that, together with the city networks and the Global Center for Adaptation (GCA) – the center of expertise on adaptation to climate change headed by former UN General Secretary Ban Ki-moon – we do have a structure to share best practices and accelerate adaptation in cities globally.

“To live with water rather than to struggle against it” seems to be your philosophy. How is it applied in Rotterdam?

As 80% of the city is below sea level, we have to deal with water! Doing nothing is not an option. And the question is how long can we proceed with preventive measures and raising our dykes. This is part of the discussion for the near future. In the meantime, we started redesigning our public space in a way that allows small scale flooding. And an interesting and very adaptive way of living with water is to invest in the construction of floating buildings. I am not talking about boat houses in our city canals, but floating constructions in old port areas which have a direct connection with the sea, like GCA’s new office.

Some refer to Rotterdam as “a sponge city”. What does this mean?

Cities are concrete jungles. Water can’t infiltrate in the soil anymore, everything is being paved. That’s why we have to invest in green roofs, parcs, green walls, rain gardens, etc. With a special campaign we create awareness and with subsidies we encourage citizens to invest in green roofs and in depaving their gardens. Actually, you could say that we are restoring the sponge function of our city.

There is lot of water in Rotterdam, but you also have to cope with drought. Is it possible to reconcile the two?

Long dry periods are relatively new for our city, that’s why this is subject to research now. One of the things that we have to consider is whether we can use the space for water storage during extreme rainfall also as water buffers during droughts. Droughts often go with heat waves. In that respect, greening our cities through nature-based solutions can be very effective in coping with heat stress, droughts and increase of rainfall.

Rotterdam is now an example for many cities around the world. In your efforts to adapt, do you also look abroad at what others are doing?

Sure, that’s why we are member of city networks, to share best practices. Two examples: we can learn from US cities about community resilience, evacuation and emergency planning. Paris is well ahead on how to deal with urban heat stress and started a program called the Oasis project, which is about climate resilient schools and schoolyards. In fact, a Rotterdam delegation recently planned a field visit to Paris.

Would you say that Europe is doing what is necessary to cope with climate change?

Both mitigation and adaptation are important. So far most attention is paid to mitigation. But climate is already changing, and the urgency to start adapting is increasing. Also in Europe.

How do you see the behavior of the younger generations? Do you see a positive “Greta Thunberg effect”?

The new generation inherits the planet with all its positive developments (which should not be taken for granted) and the negative (which we have to address). Of course it is always good that the younger generation actively participates in this debate. A debate which concerns all ages and generations equally.

COP 25 in Madrid was rather disappointing. Would you say that civil societies are more dynamic and ahead of governments?

Civil society often leads in addressing issues. Especially when it is difficult to find common ground on climate issues at national level, local governments need to step up and act.  In Rotterdam we have signed our own Climate Agreement, in line with the Paris Agreement goals and in partnership with more than one hundred companies and social organizations. Within 10 years, the city aims to reduce CO2 and other greenhouse gas emissions by 50%. 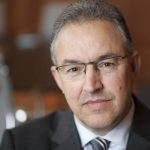