For many years now, academics have debated whether regional trade agreements are ‘building blocks’ or ‘stumbling blocks’ for development and free trade. Regionalism has recently returned to the forefront of attention, as the slow progress in the Doha Round of negotiations has led many countries to increasingly pursue regional agendas.

Frequent currency and banking crises in the last decades in emerging markets have also fuelled distrust in the multilateral financial institutions and their ability to prevent and manage such crises, and have led to growing interest in financial and monetary cooperation at the regional level.

Recent research carried out by the UNCTAD Secretariat on the benefits and drawbacks of regional arrangements for developing countries has generated some interesting results in this context, which may make an important contribution to the debate.

The main reason for this is easy to understand. Many of these North-South agreements are missing the developmental perspective, for at least three reasons:

By contrast, UNCTAD’s research has also found that South-South agreements offer developing countries many advantages, which for the time being are not provided on the multilateral level, nor incorporated in North-South agreements.

One of the key motives for developing countries to enter into agreements with partners at a similar level of development in the same area is that of market access. Of course, the benefits of market access, such as scale economies and the diversification of production, are arguments that apply to trade integration generally, be it with developed or developing countries. Nevertheless, for many developing countries that are at an early stage of industrial development, a regional orientation involving countries with similar economic structures and technological capabilities may be considered a more viable option. The initial foreign competition within the region may be less difficult to handle, the technological gap vis-à-vis competitors from more advanced countries outside the region may be easier to close, and the probability of finding a level playing field is greater. In other words, the regional market often sets less exclusive benchmarks than competition with mature suppliers, so that even production at the infant industry stage can be successfully broadened. South-South cooperation can also be advantageous when it comes to competition to attract FDI and to avoid races to the bottom.

This finding is also supported by empirical evidence of an increase in the relative share of manufactures and medium- and high-skilled products in the intraregional trade, which suggests that regional cooperation between developing countries can be an important means to accelerate industrialization.

Furthermore, regional cooperation in the monetary and financial area can provide important tools for the stabilization of intraregional exchange rates, and thereby reduce their potential to serve as a source of instability or as a transmission mechanism for global shocks. Similarly, cooperation on major investment projects can reduce common bottlenecks in public infrastructure like energy and water supply.

I think that these findings offer some interesting new perspective in the debate on regionalism. 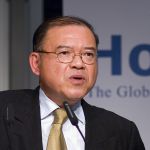