In your view, what is the current major debate on humanitarian action about?

The role of municipalities, which are often forgotten by United Nations agencies and the main NGOs in situations of emergency or natural disaster.

The association I head, CUF, has implemented funds all over the world to help populations affected by floods or earthquakes, in Morocco, Algeria, Nicaragua and Haiti, or in a situation of political and humanitarian crisis, like in Serbia and Northern Mali. One observation comes out from all these actions: local governance continues to be the most neglected level by humanitarian organizations, for whom local governance is tarred with the same brush as corrupt governments or failing States.

The second part of the problem is that at least 40 countries around the world have a State in name only and are unable to manage themselves – even their sovereign functions. In Nigeria, the authorities have been unable to handle the problem posed by the Boko Haram Islamist sect.

Whatever the many causes of the deterioration of States, we are faced with situations where the local level becomes central: this involves mayors, when they exist, and ethnic minorities, like in Syria and Iraq – our last intermediaries to protect populations when all governance structures have disappeared.

Why is this local level neglected?

No one in the humanitarian field has understood the importance of decentralization yet – a phenomenon parallel to globalization. States are increasingly transferring powers and responsibilities to local authorities, which take charge of education, health and basic services. Very often, mayors are there before, during and after crises. They alone can maintain services for populations. Ideally, they should get a piece of the humanitarian pie – which represents huge amounts partly managed by UN agencies. The latter operate in the field via clusters (sectoral grouping between agencies and NGOs) in order to streamline their approach. Since they have been operating in this manner, they have neglected territories and local relationships.

How do local authorities try to address this challenge?

We are involved in the preparation of the first World Humanitarian Summit, which will be held in Istanbul in 2016. We are leading the committee which is dealing with the topic: “Crises, Humanitarian Action and Local Authorities”, with the Netherlands, Canada, Switzerland, Sweden, Thailand and Turkey, which is directly concerned due to the presence of 2 million Syrian refugees in its territory. We are developing this group, which is called a task force for the moment. But it should eventually be called “Crisis and Territorial Governance”, in order to turn it into an institution based in Geneva which will work with NGOs and the United Nations. Indeed, being united at global level within a recognized institution is crucial for cities and local governments.

Do NGOs such as CCFD-Terre Solidaire not already extensively rely on municipalities?

French NGOs are at the top of the class in this respect.

However, Haiti remains a stark counterexample. The huge UN machine did not deal with local authorities after the earthquake of 12 January 2010 and its aftershocks, which killed over 300,000 people. As a result, mayors were demeaned. The humanitarian system that has been developed acts on behalf of civil society and rejects anything to do with politics or governance. In Haiti, where the State has no power, humanitarian organizations have had a field day, in an almost colonial manner: money passed under the windows of devastated city halls to go to self-proclaimed neighborhood committees! When the humanitarian organizations left, mayors were left penniless and with a problem of credibility.

It was the same situation in Indonesia, during the tsunami which killed 220,000 people on 26 December 2004. The NGOs arrived without taking into account the fact that there were authorities and behaved as if they were on virgin territory.

What can be done to restore the reputation of these mayors who are immediately suspected of corruption or ineffectiveness?

There is a whole lot of talk about participatory democracy, the need for a bottom-up approach by directly addressing populations. In line with this, small NGOs launch programs in neighborhoods without taking a more comprehensive planning into account. Very often, the mistrust of local elected officials concerns issues of governance, misappropriations and corruption. This issue of confidence may seem legitimate in certain cases, but must not prevent any action with mayors who do an important job in the field. The association CUF, for its part, only pays upon presentation of invoices with local authorities who are our partners as prime contractors. In Morocco, we have built a social center for women at the request of the municipality of Al Hoceima, which was affected by an earthquake in 2004.

Decentralization is not lagging behind everywhere, especially in Africa, with the case of Mali… Is this an example that should be promoted?

Indeed, Mali has been a pioneer by launching decentralization in 1992 under Alpha Oumar Konaré. It has not been convincing, since when it started, mayors did not have a cent. Today, mayors in Mali are beginning to have a lot of clout, even at political level. The Malian State no longer exists in the northern regions. The entire crisis of 2012 and 2013 was managed thanks to the millions of euros provided by the aid of French regions, on the basis of sometimes very longstanding twinnings or partnerships, like between the Rhône-Alpes region and Timbuktu region. This fact went unnoticed, but we were able to assure the survival of populations thanks to the mayors of Timbuktu Gao and Mopti for the provision of basic services.

Does the fact that the administrative map of Mali has been redefined, with additional regions, complicate the task today?

No, what blocks us is more the “red zones”, these areas where the French embassy recommends not to go to limit the risks of abduction. The elected officials in Northern Mali move between their regions and Bamako. We are currently preparing a support program for local authorities in Northern Mali to assist in the emergence of decentralization, which is no longer an empty phrase in Mali. Since the signing of the Algiers Peace Agreements on 20 June 2015, the Prefect is no longer the highest authority, even if Mali’s administration is finding it hard to get used to this.

How can local authorities play a role in preventing disasters or crises?

A lot of people are working on this issue. The mayor of Banda Aceh, a city in a coastal region in Indonesia, has conducted exceptional prevention work since the 2004 tsunami. Children have been trained in how to react in the event of a new disaster. “We are ready for the next tsunami”, she says today. In terms of prevention, the Japanese model prevails. There is such a high level of preparation and training, even in the architecture, that there are practically no more deaths in the event of an earthquake. In the rest of the world, we hear a lot of talk without seeing any solutions.

In your opinion, what is the main barrier to the humanitarian action of local authorities today?

It is not their activity. Local authorities continue to be simple donors. They have taken to financing projects at international level, even 10,000 km away, in the context of partnerships. NGOs like Action Against Hunger (ACF), the Red Cross and Doctors Without Borders (MSF) employ a lot of full-time people whose mission is to prospect local authorities. Municipalities and departmental or regional councils increasingly tell us that they would like to know how their tools to manage a territory can be shared in the context of humanitarian problems. This is not only for emergency relief, but also for reconstruction operations.

The opinions expressed on this website are those of the authors and do not necessarily reflect the official position of their institutions or those of AFD. 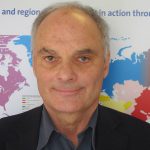