Do you think the SDG can actually be implemented?

Yes, because countries will generate a useful discussion around these goals and set certain structures in place. The SDGs will encourage activist groups in countries to review what is actually happening and to hold the governments accountable.

In some sectors and in some cases, the MDGs have worked, for example, in reducing child mortality and increasing access to water. In some others, they haven’t worked, such as for universal primary education, but on balance, they have proven to be a good thing based on the number of people affected and the change in the trajectory of progress since they were announced. That’s why there is such a momentum to move forward now.

Is the eradication of extreme poverty a realistic goal?

Yes, with the possible exception of countries in conflict. But we don’t know which countries! If you had asked me two years ago whether it would be possible to eradicate extreme poverty in Myanmar over the next 20 years, my answer would have been “no”. Today, I would say “yes”. We might not be able to eradicate extreme poverty everywhere, but we must reach that goal in as many places as possible. In that respect, the rhythm of progress made with the MDGs is very encouraging.

What would you recommend governments do so they could more effectively fight poverty and promote sustainable development?

To work on the coherence of public policies is one key point, on all levels: multilateral, bilateral and national. For instance, we are facing a refugee crisis with people fleeing from Syria, but it’s difficult to help a host country like Jordan directly, because of its status, as an “Intermediate Income Country”. So until recently, Jordan was not eligible for concessional assistance from the World Bank. This is just one example of how our systems have to adapt to become coherent and relevant in a changing world.

To take another example, biofuel subsidies make it more difficult to fight hunger, because of the distortions they create in agricultural land markets. So many issues that we are trying to deal with are interconnected. We need to take a broader view to understand and solve them.

In terms of development aid, what do you think must change?

Cash transfers to help the poor may not be a solution, but they are a good benchmark. Each time an aid agency provides a service, we should ask ourselves what the equivalent would be in cash given to the target group, to save on costs and on service delivery. Fast-changing technologies make it worthwhile to provide money at a low cost, rather than aid-heavy projects. The financing of projects will remain important, but we need to take a look at how a project can transform a country, through innovation, instead of just focusing on the project itself. So, for example, the development of mobile money can have a far more transformative impact on overall development than a specific project to help a local community.

Partnerships between public institutions, NGO’s and the private sector have become important platforms, but there is still low trust between these groups that hinders creation of effective partnerships. If we are to work together with the private sector in the development sphere, the public sector and NGOs need to set clear responsibilities for companies.

In terms of infrastructure, after COP21 in Paris, the world is heading towards trillions of dollars of investments, not billions. We know the cost of capital for low-carbon infrastructure remains high. If you do not have capital, as a developing country, you are more likely to choose the less expensive option, which is not the most efficient. We need to review the way we could help mobilize sufficient capital to make the right choices in terms of renewable energy technology. The prices for such equipment are favorable now, but not the cost of capital. Public institutions have a lot of work to do in that regard.

On another level, we have a big opportunity with data becoming freely accessible. Planet Labs has 150 satellites in operation, mapping the globe day after day. This means real-time data from these images can now be used for agriculture, urban development, roads, anything related to physical plans.

What else should be done differently by developed countries?

Developed countries should look at their expenses for shared global systems – peace, climate, forests, oceans and so on. UN peacekeeping missions and humanitarian aid are underfinanced. The global response to aid appeals is now less than 50% of the amount required. Some multilateral institutions are funded in order to provide common goods and services, but they have used the funds to provide more services and reduced their work on providing common goods.

Overfishing remains a problem, for instance. International treaties address this issue, but are not implemented. We lack regulations and norms in many new fields. There are no norms or standards for technology transfers, cross-border payments, etc.

What is your take on the lack of regulations for the regulators of our world, such as the UN system?

What’s interesting is that there is no regulator for multilateral agencies. The larger shareholders are the G-20 countries, an informal group, just an association of large economies. They are the largest economies and do not have the legitimacy to really change those agencies. This is really a key question: who is in charge? Who is going to see whether this system as a whole is fit for its purpose?

Is it one thing to have multilateral agreements, but another thing to implement them?

We need strong multilateral institutions. Many of the current multilateral institutions, in the United Nations, the development banks and other funds, are under-resourced because donors do not know exactly what these institutions do and how much their services should cost. If an agency is not effective, it is hard to determine whether this is because of inefficiency or because the agency is under-resourced. Institutional mandates are changing. They have governance issues and difficulties hearing the voices of a broader group of countries. They need to undergo some internal structural reforms to become more effective.

For instance, the World Bank Group has embarked on a set of reforms under its new president, Jim Yong Kim. Reform has been going on for three or four years now, and it’s still a work in progress. Reforming a large institution is not a simple task because of competing interests among stakeholders, political disagreements and funding restrictions, and yet, we are faced with a situation, as we made clear in Paris during COP21, where we need to act with urgency – quickly, effectively and collectively.

Multilateral agreements can be reached, but the multilateral mechanisms stay the same. This is worrying. We need regulatory structures, otherwise we will live in a less optimistic, more political world, with a lot of tensions. 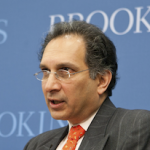