State Minister in charge of the Ecological and inclusive Transition

In 1990, Nicolas Hulot, journalist-reporter, the son of a gold hunter who became famous through his TV show “Ushuaïa”, launched a Foundation for Nature and Mankind (FNH), which he still heads today. He was an ecologist candidate for the 2012 French presidential election, but was beaten by Eva Joly during the primaries. He co-wrote the film called The Titanic Syndrome (2009) and repeatedly stresses that there is an “ecological emergency”.

Speaking at the Convergences 2015 World Forum, he hammered home the message: “We must forget the idea that the economic model as it exists today can continue. Our economy was built on exploiting raw materials. Without realizing it, we have shifted from the illusion of abundance to the era of the scarcity of natural resources. Yet scarcity is not managed in the same way as abundance. We need to come back to legislation and regulation, because we have reached the finiteness of our resources. When there is competition over raw materials, there is tension between countries: this was the case for oil, it will be the case for scarce minerals, scarce land and water. The current system is plundering our resources for the benefit of the minority. Economic regulation must not be disconnected from the environmental impact. All this requires politics and legislation to take back the wheel.”

For Nicolas Hulot, in terms of issues related to microfinance, a core topic for the Convergences 2015 World Forum and posing the same challenges as for the financial sector as a whole: “The opaque side of finance undermined the spirit of Philadelphia in the post-war period”.

In the days of Roosevelt, when the Bretton Woods Institutions were established and the Marshall Plan was launched for the reconstruction of Europe, “Finance and the economy served human development”, points out Nicolas Hulot, “and not a certain number of individuals or groups who immorally ensure that a large amount of this money does not serve the general interest”.

How can we bring finance back to its original purpose: investment in sustainable development projects? Nicolas Hulot focuses on his realm, the European Union (EU). He believes that working groups need to be set up and that cooperation needs to be enhanced in order to enact new regulations and additional standards.

“Labor taxation needs to be reduced in order to boost employment and part of this taxation needs to be transferred to energy levies and levies on natural resources”, he states. “We need to create virtue and deterrence”, because the star presenter of the “Ushuaïa” show is convinced that “green” growth will not come about spontaneously if the free market continues to operate as it sees fit 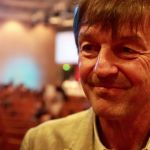 State Minister in charge of the Ecological and inclusive Transition