Paul Verschuren worked for many years for the Anglo-Dutch company Unilever, until his appointment in 2012 as advisor on food security to the Netherlands Ministry of Foreign Affairs in The Hague. He sees the European Development Days (EDD), in which he took part on 16 and 17 October, as “an important platform for developing solutions”.

The main objective is to find partners capable of developing effective solutions on the ground, because “solutions can only come collectively from a group of partners”. This is the usual approach in the Netherlands, whose permanent negotiating process between the social partners has been dubbed the “polder model”.

Paul Verschuren’s main mission is to provide his know-how to the government to help open up development policies to partnerships with the private sector. “People cannot be fed by governments alone. They need to buy better food. Unilever conducts research on food and health. We need to combine social and economic goals. Development needs partnerships, forged through a collective dynamic that must be stimulated.”

As an expert, Paul Verschuren believes that the crux of the matter is the local impact of development assistance, rather than the financial amounts involved. The Netherlands have long been considered as exemplary in the field of development financing, along with the Scandinavian countries, having allocated 0.8% of GDP to official development assistance (ODA) in 2010, before budget cuts brought the percentage down to below 0.7% of GDP in 2013. “We need the funds, but keeping to an exact percentage of GDP allocated to aid is not easy in a time of economic recession. The question is what we want to do in the years to come… If the developing countries are doing well, so are we. That’s important. You can’t have healthy businesses in an unhealthy society. We are looking for “win-win-win” situations, where governments, the private sector and populations are all winners.”

One of the initiatives he mentions is the “Amsterdam Against Malnutrition” (AIM) project. This is an ambitious project launched in May 2009, which involves the government, large companies such as Azko Nobel and Unilever, the Dutch University of Wageningen and several NGOs. The aim is to improve nutrition for 100 million people in Africa by 2015. The initiative is focusing on six countries: Kenya, Tanzania, South Africa, Ethiopia, Ghana and Mozambique. “There will no doubt be problems along the way, but if it works, the project will be an exemplary one for other governments around the world”, says this Dutch expert. 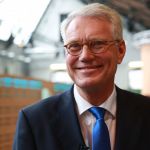