Researcher, Specialist in adaptation to Climate Change at Ramboll France

In April 2020, the Food Crisis Prevention Network (RPCA) warned of the risk of a major food crisis in West Africa. This looming crisis is the result of several factors such as security and health risks and a very worrying pastoral situation. Large feed deficits in Senegal, Mauritania, Mali and Niger have been recorded. Combined with the restrictions on movement linked to Covid-19, which limit cross-border transhumance and the supply of many livestock markets, these feed deficits pose a significant threat to the food security of many households in the region.

The key aspect of pastoralism in West Africa is livestock transhumance, which allows herders to adapt constantly to climate constraints and to the availability of resources (mainly water and grazing land). This explains the big seasonal movements from production basins to consumption centers located in large cities of the subregion and in coastal countries.

This unique production system is a major economic pillar in the Sahel and a source of resilience for the local people, who have benefited little from national development policies. Animal production makes up 40% of agricultural GDP in the region on average (De Haan, 2016), and transhumant pastoralism is an important part of the livestock sector, representing between 70 and 90% of the cattle population in the Sahel even today.

Pastoralism carries not only economic weight: it also contributes to the resilience of rural populations. These are often poor and marginalized; they rely largely on livestock for food and income. In short, for Sahelians living in areas with considerable agricultural and climate constraints, pastoralism is a means for making a living from the land and—thanks to herd movements—coping with shocks. 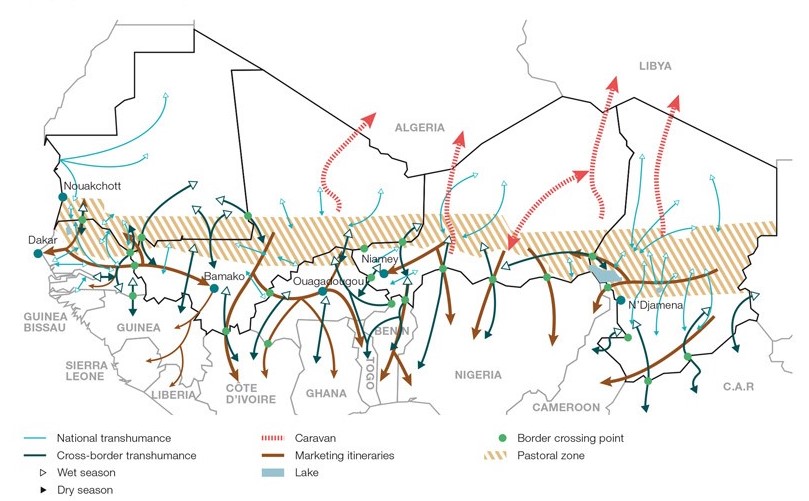 Sahelian pastoralism: a driver for inclusion and stability in a fragile region

In the absence of regular and reliable data on livestock numbers and their seasonal movements, price analysis can help us find information on the supply status of livestock markets. It can also show us how prices have changed during the agricultural season and, consequently, the main trends that may affect pastoral households.

The price analysis conducted as part of the BRACED program was based on livestock price data from the major markets of Mali, Burkina Faso, and Niger. Large-scale data collection was carried out by national and regional market information systems and fruitful cooperation with the Agrhymet Regional Center and the Permanent Inter-State Committee for Drought Control in the Sahel (CILSS). 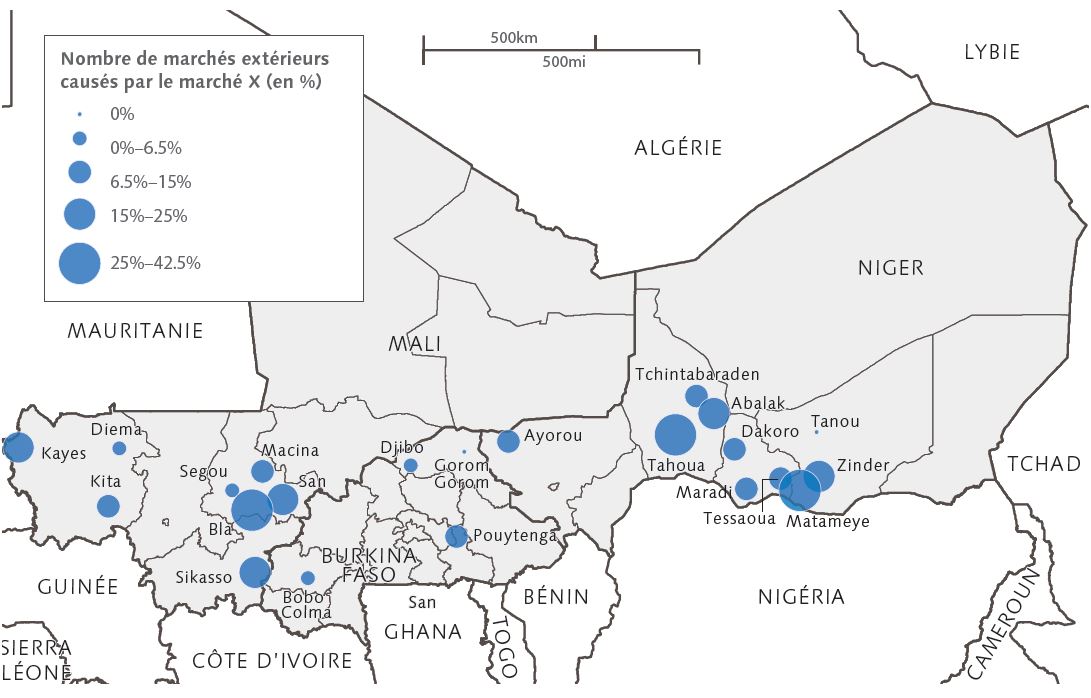 Locations of the region’s leading markets 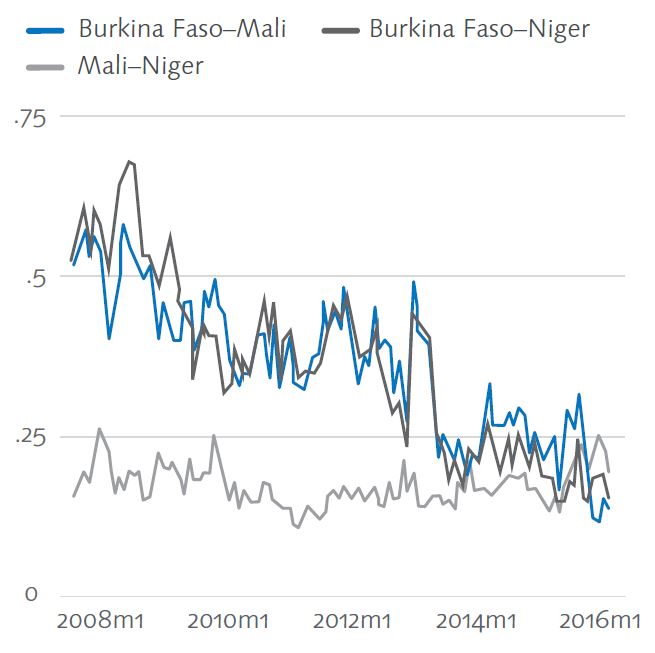 This analysis shows average price differences for cattle reared within the subregion over the 2008-2016 period and how they gradually converge. The results indicate improved regional integration of livestock markets since the early 2010s.

Livestock trade suffers from many barriers, including high transport costs, costs related to administrative documents for export, official veterinary certificates, and export taxes. However, subregional price convergence indicates some degree of homogeneity of prices among markets, itself a guarantee of a form of economic stability. This integration is most certainly supported by transhumance, which is a source of mobility and exchange of goods, people, and information within countries and the region.

The price analysis also highlights the leading role of some markets, whose current prices influence future prices over a broader set of markets at the national level or regionally. For example, the analysis shows the influence of certain Nigerien markets on the Burkinabe and Malian markets, such as those in Zinder, Tahoua, and Matameye. This comes despite the fact that these Nigerien markets are located relatively far from those they influence, suggesting that Niger plays a significant role in regional livestock trade due to its considerable weight in production and consumption. These markets are moreover located on trade routes leading to Nigeria, whose economic weight in the subregion is well-established.

These leading markets can thus be seen as barometers that indicate the supply status of livestock markets and thereby help us anticipate price dynamics that can affect the rest of the national and regional markets.

Pastoralism in the Sahel: “Sedentism cannot be imposed”

Climate change and conflict: serious threats to the sector

Extreme weather events have been occurring in recent years. Droughts in particular have been more intense and frequent. These have altered pastoralists’ transhumance habits, leading to increasingly earlier movements that are a source of conflict over access to resources.

Climate change, by leading to an increase in the frequency of extreme hydrological and climate events (mainly droughts but also floods), is making already marginalized pastoral communities more vulnerable. In times of drought, local conflicts over access to resources and the economic insecurity of stakeholders become worse. They may then be the source of more widespread regional conflicts.

The links among climate shocks, conflicts, and economic shocks are complex but quite real. Study of a panel of 45 markets over the 2008-2016 period shows that climate and conflict variables—particularly rainfall and terrorist-related conflicts—play a significant role in explaining price dynamics and thus in market stability at the regional level.

The situation in Mali clearly illustrates the complexity of these interactions. The way in which rebel groups controlled the main transport routes in northern Mali in 2012 has been documented. Their actions impeded the mobility and trade of livestock and led to increased theft and losses (D’Errico et al., 2017). Conflicts have also hindered the growth of the livestock sector nationally. The initial growth estimate for Mali in 2012 was 4.4%, but this figure was reduced to 0% due to the crisis (IMF, 2013).

Give livestock markets the attention they deserve

The Sahel suffers from a volatile socio-political and security situation. Against this backdrop, the intensity and recurrence of droughts, coupled with the ensuing economic shocks, can create a complex situation with many risks. This is an obstacle to the resilience of pastoral communities and makes poverty and food insecurity take root in the region.

Market integration and transhumance are two key drivers of pastoral resilience. Transhumance is supported and regulated by several official documents. These include the ECOWAS Protocol on Transhumance and the 2013 Nouakchott Declaration on Pastoralism (signed by six Sahelian countries: Burkina Faso, Chad, Mali, Mauritania, Niger, and Senegal). These documents should be reviewed in light of the current situation, so that transhumance routes can be secured. Furthermore, international transhumance certificates that are broader and that cover coastal countries should be put into operation in order to address transhumance regionally.

To bring stability to the Sahel, it’s crucial to find solutions that will protect livestock mobility, preserve market integration, and support sector transformation. For this, governments, regional institutions, and technical and financial partners need more information on the complex dynamics of pastoralism and on what leads to pastoral crises in the Sahel.

The problem is that—compared to cereal markets, whose dynamics are considered key indicators of food security—livestock markets have not yet been given the same attention. Indeed, whether they be national, regional (PREGEC Charter indicators) or global (FAO GIEWS, FEWS NET, etc.) information systems on markets and early warning systems track mainly grain prices. They should incorporate specific indicators related to livestock, including livestock prices.

Finally, stronger policies and investments to promote pastoralism and transhumance in the Sahel are essential if sustainable food security, economic development, and stability in the region are to be achieved. 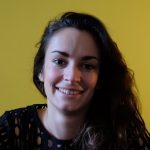 Researcher, Specialist in adaptation to Climate Change at Ramboll France