The living standards gap between France and its overseas departments and regions has halved over the past fifty years. This economic and human progress can continue through 2050, provided that productivity gains are achieved to counteract the recessionary effects of increasingly slow population growth. 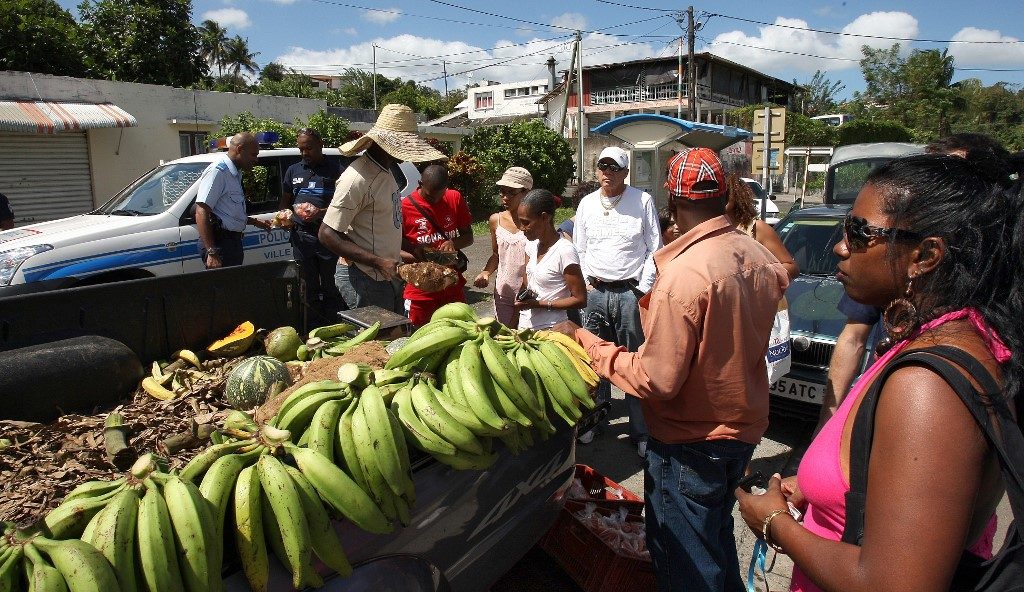 A fruit vendor sells produce from the back of his pick-up truck as a general strike continues to halt the island of Martinique, in Fort-de-France, on February 13, 2009. (Photo by THOMAS COEX / AFP)

Over the past fifty years, the overseas departments and regions (excluding Mayotte) posted sustained growth in per capita GDP. The disparity in per capita wealth with mainland France, which was 70% in the early 1970s, has halved since then (see chart 2 below). Convergence has been faster in Martinique, where the gap with the national average is now just 30% or so. It has proven to be slower in French Guiana (still 50% today) and even more so in Mayotte (-70%).

The dynamic economies of the French overseas territories over this long period can be explained by several factors. Public transfers with mainland France (and to a lesser extent Europe) were among the major drivers of this long-term growth. Over the 1993-2007 period, these flows increased, on average, by between 4% per year in the Antilles and 6% in French Guiana. The transfers fueled household consumption by the overpayment of public officials, social benefits in cash and investment, thanks to various tax exemption measures.

This investment and consumption spending had multiplier and accelerator effects on growth in these territories. The steady increase in demand prompted an increase in supply, which led to a significant accumulation of physical and human capital. Human capital has benefited from undeniable progress in the areas of health and education.

What are the long term prospects for growth for the overseas departments and regions in the likely event of very moderate growth in public transfers from mainland France?

A formalization derived from the Solow model can be used to trace potential paths for long-term GDP growth. Based on this coherence framework (which is not a forecasting model), growth essentially depends on two factors: human capital endowment, which is supplied by demographics, and productivity gains. Assuming that capital per worker is constant (also called “capital intensity”), the accumulation of physical capital is expected to follow that of employment.

Future growth will not be driven by demographics

According to projections from INSEE, the population of the five overseas departments and regions will increase only slightly by 2050 (+260,000 inhabitants), at an average annual rate of 0.4%, only barely above that of mainland France. These sluggish demographics will result in a stabilization or slight drop (0.1% per year) in the available workforce. This general trend of course masks disparities: while Martinique and Guadeloupe will experience an absolute decline in their population over the next thirty years (-0.9% for Martinique and 0.6% for Guadeloupe), the populations of French Guiana and Mayotte will continue to increase (1.1% and 2.3% per year respectively).

As seen in Chart 1 (below), the paths of per capita GDP growth in the absence of productivity gains vary according to geographic area. However, the conclusion of the model is clear, all the paths end up converging in 2050 with growth close to zero. 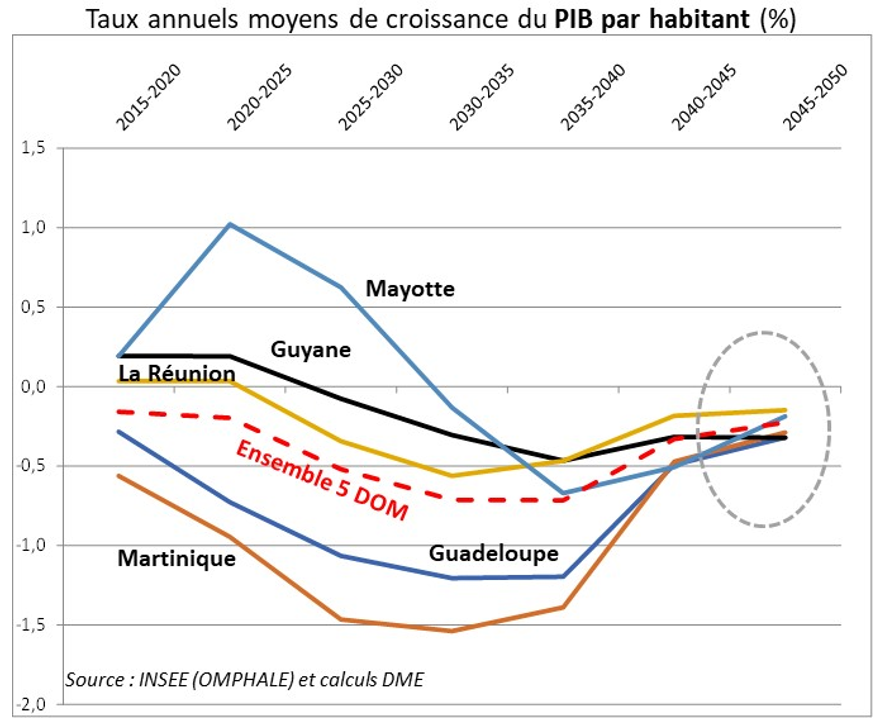 This obviously is not a desirable scenario. It would mean an end to the long process that began in the early 1970s of catching up in terms of living standards (see Chart 2 below). If this scenario plays out, it will lead to a divergence with mainland France: by 2050, the per capita GDP for overseas territories would only be 60% that of mainland France, similar to the situation in the mid-1980s.

Future growth will rely almost exclusively on the productivity gains

Total factor productivity (capital and labor) is the main engine of growth for OECD countries. But up to now, this engine of growth has barely been mobilized by French overseas territories because they have historically benefited from other drivers, especially transfers. The apparent labor productivity in the market sector is approximately 40% lower than that of mainland France. Ultimately, this gap could prove to be an opportunity in the future: it provides an insight into the “sources of productivity” that could be tapped to drive future growth for the overseas territories (while these sources have almost completely vanished now in OECD countries).

The growth of productivity in French overseas territories will need to be steady in order to continue the move towards convergence with the living standards of mainland France over the next thirty years. Gains limited to only 1% per year would, at best, only stabilize the gap with mainland France at the current level (a 40% difference in per capita GDP, as illustrated by the yellow curb in Chart 2). Convergence with mainland France by 2050 would require annual productivity gains of 2.5% per year (see the green curb).

Ambitious as it may be, this growth target is not unattainable. However, it is dependent on increased investment in training, the gradual removal of public policies that continue to hinder the search for productivity gains (like overpayment and protection measures) and, finally, the promotion of competition, probably the best stimulus for improving the efficiency of productive systems.

Finally, there will be the question of sharing the productivity gains between capital, labor and, perhaps more importantly, with customers, through price cuts. The best means of fighting a “high-cost of living” could therefore be to pursue productivity gains in order to constantly improve the price-competitiveness of economies in French overseas territories.