Migrant remittances to their countries of origin, in Sub-Saharan Africa, are a crucial source of revenue – USD 33bn in 2015, i.e. 2% of total GDP in Africa. These financial flows have been closely monitored by the World Bank since 2010 and now exceed Official Development Assistance (ODA). They should prompt us to address migrant issues differently, as explained by Khady Sakho Niang, President of the International Solidarity on Migration Organizations Forum (FORIM), a platform of associations based in Paris.

Have decision-makers realized how important African diasporas are for the development of the continent?

Policymakers from both the North and South periodically discuss this contribution with a certain opportunism. The remittances of some 30 million African migrants around the world, in Europe, the USA and Gulf countries in particular, are three times higher than Official Development Assistance (ODA).

The countries most dependent on them are Lesotho, Gambia, Liberia and the Comoros, with remittances which account for some 20% of GDP, according to the latest available data provided by the World Bank. In other countries like Senegal or Togo, 10% and 8% of their GDP depend on them.

Leaders know it and say it. Yet no public policy capitalizes on this effort to contribute to the economy of the two territories which the emigrant belongs to: his/her host country and country of origin. Diasporas are courted by political parties and coveted when they vote abroad for national elections, as is the case in Senegal. But their actual contribution is not capitalized on.

What do you expect from the authorities in Senegal, for example?

For them to set up an entity independent of State policies to bring together a profusion of initiatives, in conjunction with the Ministry for Senegalese Abroad and associations.

The Senegalese diaspora is one of the oldest, the best trained, with resources and specialized expertise in many fields, including development and social science.  What is lacking is an umbrella and non-political entity able to channel all these energies in order to give them coherence.

Executives from the diaspora are increasingly designing projects on a regional or national scale to build schools, agricultural product processing plants or mineral water bottling plants, for example. The Program to Support Solidarity Initiatives for Development (PAISD) was launched in 2005, with donor support, in order to assist the investments made by individuals, based on the feasibility study and up to the implementation. We think that it is not sufficient…

Is there not a generational change at work in Senegal, where an increasing number of young people decide to stay?

Yes, there is. Many also leave with the aim of coming back to the country. We have been working since 2010 with a Senegalese association in Barcelona on a project called “Togg Tekki” (Stay and Succeed in Wolof). Three drop-in, counselling and information centers have been set up in  Dakar and Matam in Eastern Senegal, and Vélingara in Casamance, in partnership with the Barcelona City Council. The aim is to give the right information to those who want to leave, so that they have the opportunity of making informed choices. Very often, the young people who risk their lives to reach Europe do not have a clear idea about what they are going to do or find there.

We tell them that it is possible to go to Spain, Italy, Portugal or elsewhere, for example, to study for three years and come back, but in a specific context and being fully aware. Prior reflection involves knowing what they are going to do before returning, and under what conditions.

What do you think of the European objective, stated last May (2016), of linking development assistance in seven African countries, including Senegal, in order to more effectively control migratory flows, even for illegal immigrants?

It is a carrot-and-stick policy. The European Union (EU) will ask to increase aid to certain countries, by adding the obligation in clauses of regulating the flows of irregular migrants – we prefer this term to “illegal” – or of accepting the refoulement to their territory of expelled individuals. For our NGO which defends migrants’ rights, it is unacceptable. Migration must be seen in a different manner: not as a problem, but as a solution.

In France, we are often reminded that migrations are tantamount to “brain drain”. We need to get away from negative clichés. The countries the migrants leave from become wealthier with these movements, which have nothing to do with a drain, but a movement of brains. The notion of “brain drain” can be contrasted with the notion of “brain gain”. Mutual enrichment can benefit both societies – host country and country of origin. Besides financial issues, the intangible transfers from emigrants in terms of knowledge, expertise in technologies or good governance models and practices are incalculable!

The European Union and migrants from beyond the Mediterranean. Could it do better?


Is Senegal’s collective imaginary not now haunted by images of shipwrecks and drowned people?

We do not deny the tragedies experienced every day in the Mediterranean. They are the result of other policies which have failed to improve the living conditions of populations, and for which both Southern countries and donors are responsible. Leaving should not be the only option to build a future for oneself. People should be able to say to themselves: “I want to go to Spain” and not “Barça ou barsakh” (Barcelona or death), as the young people do who are willing to die in canoes to cross over to Spain. If they are willing to die, it is because socially they are already dead. They say to themselves: “Others have succeeded in Europe. Why not me?”

Syria: “One of the three reasons why migrants leave is to find electricity, after security and employment!”


What needs to be done?

Upstream, I think it is necessary to work on breaking the myth of Europe in the minds of young Africans. Europe retains this image of a continent where everyone is comfortable and earns a lot of money. It would be better to tell them about the plight of these populations who do not have the minimum wage to live on, the disaster of these societies without solidarity where you are alone, in opposition to our traditional African societies.

You participate in an international campaign which aims to break 10 myths about migration. What is it all about?

Organizations such as FORIM, the International Catholic Migration Commission (ICMC) in Brussels, and CONCORDE, a European NGO platform, have set up this advocacy and response tool to address widespread, but false, perceptions, for example, this simple assertion that “Europe can no longer accept migrants”. We are developing a counter-argument in favor of migration, which we address to our actors in the field, the media and the general public. The campaign is also led by various partners, such as SOS Racisme, CCFD-Terre Solidaire, Solidarité Laïque, Secours Islamique and the reviews Politis and Africultures.

Migration does not necessarily need to rhyme with repression 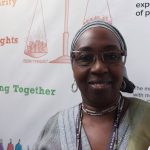