His experience also proves that launch a start-up in the water sector in Africa, have a significant social impact and become profitable can all be done. His company Gongali Model, based in Arusha in Tanzania, markets his patented system that removes micro-organisms and chemical products from water.

What were the reasons behind your innovation?

According to UNICEF, 46% of the population of Tanzania does not have access to an improved drinking water source. Health problems (diarrhea, typhoid, amoebas), and especially child mortality related to this problem in rural areas, prompted me to conduct research with the aim of having a tangible impact on the health of my fellow citizens.

My objective is to reach as many people as possible. I want to be a millionaire, not in dollars, but in the number of people with access to drinking water thanks to me!

It is for this reason that we decided, in addition to the filters, to rent, sell or install small water filtration stations in our outlets to serve all those who cannot afford to buy filters for their homes. Consequently, we filter the water for them so that they can buy it at a very low cost.

“Access to drinking water and sanitation is a fundamental human right”

What stage have you reached in the development of your project?

The pilot phase has been completed. Our products are now available on the market in Arusha, my hometown, in northern Tanzania, near the Kilimanjaro and Serengeti National Park. So, they are now available to the city’s 700,000 residents, so many people who have now access to drinking water.

We sell our water filters and filtration stations through our own retail network. We currently manage 30 kiosks in the city and hope to have 100 by April 2018, which will extend our services in the region and serve rural areas. In addition, 90 outlets rent filters from us and can distribute cheap clean water.

Our filtration stations are also sold to companies, schools, universities, clinics and individuals, with a filter recharge system. A liter of drinking water can consequently be bought for the price of 200 Tanzanian shillings, the equivalent of 10 US cents, i.e. five times cheaper than the market price.

Shouldn’t access to drinking water be up to the public service?

The Tanzanian Government has a lot of other tremendous responsibilities, particularly in the field of education and infrastructure. Tanzania is a developing country and the authorities are doing their utmost to simply improve access to water. Developing access to drinking water is even more difficult to achieve. Meanwhile, the authorities give me their full support, in particular by providing me with all the authorizations required to operate.

Could your innovation be replicated on a larger scale by the public authorities?

It is possible, but they first ask me to prove that the system operates efficiently. So, I carefully record the traces of our impacts, backed up by statistics, to show that we are doing pioneering work.

Africa: Public health, a question of political will

What is the sale price for the filters and is your company profitable?

The smallest model of the filter costs 150 dollars. It has the shape of a tube and can treat 10 liters of water an hour. Its components need to be replaced after 800 filtered liters, which is the average water use of a household per quarter, meaning it costs about 5 dollars every three months. The largest filter costs 240 dollars and has a treatment capacity of 20 liters an hour.

Gongali Model, our company, is now profitable. It currently generates a turnover of about 3,000 dollars a month: 2,000 dollars come from sales of water which is already filtered and 1,000 from sales of filters and filtration stations. We have 12 permanent staff at the headquarters and three volunteers. Salaries are not very high in Tanzania, so we can also pay kiosk managers a salary of 50 dollars a month.

Do you still benefit from grants or external support?

After completing my PhD, in 2010, I worked for four years on the first prototype of the water filter in the laboratory of the University of Arusha. An 8,000 dollar grant from the university really helped me, as did the 33,000 euros from the Africa Prize for Engineering Innovation from the British Royal Academy of Engineering, which I won in 2015.

Thanks to this award, I was also able to benefit from six months of business training, which really made a difference: I learned how to develop a business plan and think about how to market my product, as well as the patent and the protection of my intellectual property. As for the money, it was reinvested in the company I set up with my wife in 2014.

The company is now well on track. We still benefit from support from the Human Development Innovation Fund (HDIF), which comes under British cooperation, but we are gearing up to become completely independent and no longer rely on aid.

What are the development projects of Gongali Model?

We have opened 10 outlets in Kenya and we receive a lot of requests from various African countries, particularly Uganda and Ethiopia. However, we want to stabilize our economic model before entering foreign markets. We are currently testing the franchise model and are setting up a pilot kiosk, which can serve as a model of viable and profitable management.

We are also considering opening our capital up to investors in order to lower the cost of the filter and be able to sell on a larger scale. But we want to be sure that we really share the same objectives and the same values. So, we do not rush into anything.

Have you drawn on other innovations in this field?

Slow sand filtration has been known for centuries, along with membrane water filtration technology. Our filters combine sand and nanotechnologies. They are consequently capable of removing pesticide residues, sodium fluoride, heavy metals, such as copper, and chemical pollutants from water. To put it simply, the nanofilter combines a slow sand filtration system and filtration nano-components, made from silicone and silver.

I have improved and combined these technologies so that the filter can treat various sources of contamination in the water and be adapted to the place it is installed. Indeed, the sources of pollution are not always the same. Water in mining regions in Zambia is mostly contaminated by mercury or copper, whereas in the Rift Valley in Ethiopia, it is mainly polluted by sodium fluoride, which is very bad for teeth and bones. Each time, we have to find the right way to decontaminate the water, which is not polluted in the same manner everywhere, neither by the same bacteria, nor by the same chemical components.

Is there a network of African innovators in the water sector?

There are, of course, other innovators, who are to be found in networks such as the Alliance for Global Water Adaptation. Innovators like me are also invited by the Water Show Africa, which is held in South Africa every year, and NGOs like Water Aid are interested in our activities. It is not really a network of innovators, but it allows us to meet and have exchanges.

What are you expecting from the actors of the water sector at an international level?

I would like all the development partners to focus on the 90% of human beings who struggle on a daily basis in Sub-Saharan Africa, in India, and in the other poor countries. The international community should be more on the offensive to develop a provision capable of meeting the huge future demand. I often hear that the third world war will be triggered by a problem of access to water. So, we should anticipate this. We need to be ambitious and target entire communities in order to have a bigger impact! 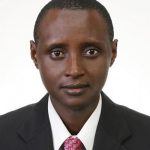