Accueil Economy Inclusive growth in Africa: “We must hand over the reins to the private sector”

How can African population growth drive more sustainable and inclusive economic growth? The International Monetary Fund’s Papa N’Diaye thinks that part of the answer will come from the private sector.

According to the latest IMF report on the economic outlook in sub-Saharan Africa, the growth rate is expected to increase from 3.2% this year to 3.6% in 2020. In light of expected population growth, is this enough of an increase to absorb the massive influx of young people into the labor market?

Papa N’Diaye: This rate masks significant differences between countries. Those that aren’t highly dependent on natural resources will have around 6% growth or more. This is the case for Senegal, Côte d’Ivoire, Uganda, and Rwanda. But countries with highly resource-dependent economies, such as Nigeria, Angola, and South Africa, will have much lower growth, around 1.5 to 2%. These rates are too low to create enough work for all new entrants into the job market. It is critical for the governments of these countries to create the necessary conditions to support sustainable and inclusive growth.

What growth rate is needed to include all the young people entering the labor market?

N’D. According to our estimates, it needs to be 6 to 7%. But even beyond these figures, some types of growth are more inclusive than others. The goal is to create opportunities for everyone. Part of this involves ensuring wide access to education and easier access to credit.

How do you explain the current low growth rates in the continent’s two “locomotives,” Nigeria and South Africa?

N’D. Nigeria experienced a steep decline in oil prices starting in 2014 and had to make drastic budgetary adjustments. More generally, all oil-exporting countries in sub-Saharan Africa have had to implement recovery plans. And they will need to keep up this major effort (around 3.5% of GDP) over the next five years. As for South Africa, it experienced a big drop in mining prices and is facing severe economic and political uncertainty.

You mentioned Côte d’Ivoire, which has an enviable growth rate for the region. Can you explain why many of its citizens are nonetheless choosing to emigrate?

N’D. Beyond the situation in Côte d’Ivoire, your question touches on the issue of inclusive growth, which we have just discussed. The UN’s population projections mention 20 million new entrants into the sub-Saharan labor market each year. This is twice the number of jobs that were created in the region in the past five years. Once again, everything will depend on how inclusive this growth is.

To foster the inclusive growth you mentioned, should the private sector become more involved, given that the public sector seems to be running out of steam?

N’D. The private sector does have a key role to play in creating dynamic, viable, and sustainable growth. In countries that are the least dependent on natural resources, the public sector generally plays an active role. But this significantly increases public debt and consequently, the debt’s burden on public finances. Demand for infrastructure is often massive. Today we must hand over the reins to the private sector.

Do you think private sector growth could promote competition and trigger lower prices for essential goods, which are often expensive on the continent?

N’D. It’s true that in sub-Saharan Africa, SMEs have a hard time entering markets that are dominated either by public companies or one or two monopolies. To help them, we need to improve the business climate and governance, as well as competition. We must also provide SMEs with easier access to credit and financial services. It’s not just a question of regulations. Many governments are making it easier for companies to use new digital technologies; this is an interesting approach. This is happening in Rwanda and Kenya.

A Free Trade Area (AfCFTA) was recently adopted across the continent even as protectionism is returning to the international scene. How can this project boost local production, while limiting imports from Asia or Europe?

N’D. An IMF report from April 2019 highlighted this free trade area’s rather remarkable potential for promoting regional integration and growth. But these potential gains depend on a number of conditions. The issue is not just reducing tariff barriers, as the AfCFTA agreement calls for, but dismantling non-tariff barriers as well (in terms of logistics and infrastructure) to facilitate trade between countries. In other words, we must be able to transport goods from one country to another; it’s as simple as that. Yet this is often very hard to do right now. This agreement is really making a difference in the sub-Saharan region. We are no longer talking about countries with 15 or 20 million people: this agreement seeks to establish an enormous market of 1.2 billion people, with an estimated value of $2.5 trillion. It could have a major impact on the global and regional economy.

Will this help turn the continent’s high population growth into an asset?

N’D. Absolutely. It’s a great opportunity to spark much-needed reforms and stimulate inclusive and sustainable growth in the area, which would create the jobs needed to absorb new entrants into the labor market. It will also finally allow the region to benefit from its demographic dividend. This is a long-term process: States have ten years to reduce 90% of the tariff barriers. But these barriers, both tariff and non-tariff, must be removed more quickly than that. Structural reforms should be accelerated immediately to take full advantage of the potential of this free trade area.

Certain areas, such as the Sahel, are facing increasing security threats, resulting in more military spending and less social spending, at the risk of undermining social cohesion in these countries. How can we put an end to this vicious circle?

N’D. The countries that are confronting terrorism will not be able to do it alone. In States like Mali, Niger, and Burkina Faso, military spending represents up to 4% of GDP on average, or 20% of their tax revenues. At the local level, authorities must promote more inclusive growth. But external help is clearly needed if they are to succeed. This problem affects the entire region: violence not only has a substantial economic impact, but it also generates migratory flows. The solution must consequently be global. 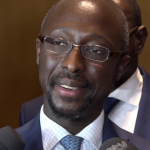 Remittances are growing in South Asia despite Covid-19

Using technology to protect tuna stocks in the Pacific region