Following years of war and poor governance, the Democratic Republic of Congo (DRC), with 75 million inhabitants, has returned to economic growth, which has stood at an average of 7% since 2010. Inflation has been brought under control, the exchange rate for the national currency stabilized, and macroeconomic indicators have turned green. Matata Ponyo Mapon, former Minister of Finance (2010-2012) and Prime Minister of DRC from April 2012 to November 2016, explains how his country has achieved these results.

Where do you start, when you need to manage a country with as many problems as yours?

In fact, my credo is simple: no making party politics, but a constant commitment to the general interest and a flawless management of public policies. It involves applying the classic principles of monetary and budgetary policy! When I was appointed at the Ministry of Finance in February 2010, our development partners were skeptical over my plan to stabilize the currency and inflation, as well as to rapidly achieve the completion point for the Heavily Indebted Poor Countries (HIPC) Initiative.

In three years, tax revenues have doubled in real terms. In Parliament, I have been called every name under the sun because I make efforts to collect taxes, but the State budget rose from USD 300m in 2001 to USD 8bn in 2015, prior to the impact of the current fall in commodity prices on our revenues.

With public finances having become in surplus, we have been able to start developing projects to build roads, dams, schools and hospitals. For example, we have relaunched the public transport company Transco, which has acquired 500 buses in Kinshasa. A new national airline company, Congo Airways, started operating domestic flights in October 2015, from N’Djili Airport, which has been fully refurbished and modernized.

Do your results owe a lot to the fact that DRC has strong potential?

No, I don’t think so. We do unquestionably have considerable assets. DRC is the second largest country in Africa in terms of surface area. We hold a fourth of the world’s copper reserves and are the first for cobalt. We have the largest forest area in Africa and the second largest in the world after Amazonia. We hold 50% of the world’s hydropower potential, i.e. some 110,000 MW.

With over 70 million inhabitants, over half of whom are under 20, we have a real domestic market. But this potential is worth nothing if it is not exploited and better developed.

We must remember that economic activity came to a standstill between 1988 and 2001, a period during which the country experienced a downturn, due to the deep governance crisis which marked the end of the Mobutu regime (1965-1997). The fall in real GDP reached up to -7% a year between 1989 and 1994. We are currently catching up with the accumulated lags. I take this opportunity to stress that the performance over the last six years has never been achieved before, whereas we are no longer under an International Monetary Fund (IMF) program.

How has your Government achieved these results?

I believe in leadership and governance. The project is clear: bring the Congo up to the rank of middle-income countries within a reasonable time and prepare the conditions for emergence. Furthermore, leaders must set an example. I myself start my day at 5 a.m. and finish at about 8 p.m. The life of a nation is too precious to leave it in the hands of people with no other ambition but personal enrichment or conceit. The sanction must be exemplary and merit recognized as a value. This is the management method applied at the Prime Minister’s Office, from the policeman at the door to my staff – seven people, instead of the hundred people that the same offices used to employ.

Why have you opened bank accounts for civil servants and stopped paying them in cash?

Because the administration is the cornerstone of recovery. Civil servants, there are a million of them in our country, represent a payroll of USD 140m a month, which is a major contribution to the financial system and national savings. The use of the banking system, which started in 2011, has made it possible to put an end to years of unpaid salaries, and have a single and reliable file of civil servants, with all fictitious officials removed (Editor’s note: people who do not exist, but allowed certain people, under false identities, to receive salaries).

What are the main projects ahead for DRC?

We need to make progress towards economic diversification in order to be less dependent on the extractive sector and structure an economy that is more inclusive and creates jobs and wealth. With this in mind, we have launched the first agro-industrial park in Bukanga-Lonzo, over 70,000 hectares for corn and cassava cultivation in Bandundu Province, in order to reduce the food import bill. Other parks will follow, a total of about twenty nationwide, in order to develop arable land. The service, construction, industry and mass consumption sectors also need to be developed.

What about the climate challenges?

The world is moving slowly but surely towards the green economy. Congo’s forests are a gift from heaven! The country’s forest areas, some 160 million hectares and 67% of the territory, hold potential which we can sustainably exploit, while respecting our ecosystems. Yet to date, only 9% of our forests are under concession, with a log production which is well below our neighbors. The call by certain NGOs to put our forests in a “glass case” therefore makes no sense. DRC can be both an economic power and contribute to the fight against climate change by developing its forest “jackpot”. Our land reserve allows us to coordinate this strategy.

Africa will drive its sustainable development !

Enhanced cooperation in the fields of science and technology, education, SMEs, sustainable environmental management, agriculture, democracy and good governance. Developed countries can help us acquire new technologies, which require a huge investment. Assistance from institutions working on new technologies and innovations would support the development of a truly African entrepreneurship.

What do you think about this widespread opinion in DRC that it is not in the interest of Northern countries to see the country develop?

I do not share this view, which brings to mind a colonial syndrome. It is up to us to work with others in order to win the development battle. Our efforts are, furthermore, recognized. DRC is one of the 10 most reformist countries in the World Bank’s 2015 Doing Business report. It moved up 10 places in the Human Development Index (HDI) between 2014 and 2015. We should also not forget that Europe has no interest in leaving a miserable, unstable and dangerous continent at its borders. 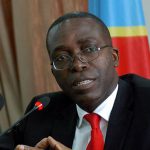