The UN climate change negotiations, from the Rio Summit in 1992 to COP22 in Marrakech in 2016, provide valuable insight into the global governance of a common as vast as the climate. This is what is explained by Amy Dahan Dalmedico, Research Director at the French National Center for Scientific Research (CNRS), a climate change specialist and co-author of Governing the Cimate?  (Presses de SciencesPo, 2015).

What is your assessment of the climate negotiations in terms of governance?

The UN’s climate governance, with the Conferences of the Parties (COP), which have been held every year since 1995, is based on what we call a “schism with reality”. Indeed, a governance bubble was gradually formed in the early 2000s, believing it could take charge of the world in order to move the fight against climate change forward thanks to economic tools (such as the carbon market) and come up with a general treaty setting targets to reduce carbon emissions. At the Copenhagen Summit in 2009, we thought we were going to save the planet, and none of this has happened! It was an illusion as, at the same time, we have witnessed accelerations in the real world, against the backdrop of fierce economic competition between countries, increasing globalization, and the universalization of the Western development model.

A second important point is that the mobilization of civil societies (the “sideline voice” of UN negotiations), which has been reinforced during the last COP meetings, has increased global awareness of the challenges and brought about a local and national reappropriation of the climate issue. Consequently, for a few years now, we have been seeing a more “bottom-up” approach of global climate governance emerging, whereby the targets to be achieved are no longer decreed from the United Nations, but whereby we seek to rely on what countries are able to do and announce.

Finally, the new emerging countries fit within climate geopolitics which radically changed between 1992 and 2010, insofar as they have become major greenhouse gas emitters. China has exceeded the USA since 2006, by becoming the world’s largest carbon emitter. These countries, which were only observers at negotiations in the 1990s, have become major actors in them. China, for example, played a decisive role in the adoption of the Paris Climate Agreement.

What are the limits of the current climate governance structures?

We should first specify that COP21 in Paris was a success for global diplomacy and governance. Getting 192 countries to agree on the same text is not an easy task, even for objectives which are extremely wishy-washy and vague… That being said, the battle has not been won yet: countries have admittedly reached agreement, they have each made promises (via national contributions in particular), but the latter are still insufficient and are to be subject to a review (which is provided for in the Paris Agreement). For the time being, it is an agreement on paper.

The issue of finance also remains vague. Yet without financial contributions, it will be extremely difficult to decarbonize part of the global economy, especially in emerging countries, which are becoming urbanized, industrialized, and provide hundreds of millions of people with access to energy. If they continue to do so on a path involving a massive use of coal, all the pledges to reduce greenhouse gases will come to nothing! This major issue has not been settled, one of the reasons being because the annual budget of USD 100bn which developed countries have committed (in 2009) to mobilize by 2020 for developing countries has not been achieved yet.

In essence, the amount of USD 100bn is insufficient. Worldwide fossil fuel subsidies stand at over USD 500bn a year. The question is how to shift these financial volumes in order to channel the heavy investments required for a low-carbon economy. Insulating buildings, promoting renewable energies, changing infrastructure and means of transport requires fresh money everywhere, in the North and South alike. This windfall must come from shifting carbon investments in the West.

Are we on this path? Does the market and immediate profit logic still not prevail everywhere, including for oil?

Yes, it does. It is rather the “business as usual” law which prevails. We are still way off decision-making processes which correspond to the sincere idea that we are really going to change our ways of investing, producing and consuming.

In addition, all the impacts of climate change may well have been measured and assessed by scientists, but once the COP meetings are over, each country is faced with other levels of problems. They all go home to face the issues of unemployment, food security, debt, even armed conflict, etc. Furthermore, I feel that the power asymmetries we face are not emphasized enough. The Paris Agreement may well have been based on the principle of differentiated responsibility, but some countries still have more means, more responsibilities, and should set a better example, or be asked to make a greater contribution.

How can we take into account shared interests, such as the Amazon forest or the Arctic, which are not represented by States?

It is a highly complex issue. These areas are partially represented by certain States, and especially by the NGOs in these countries. This issue concerns the need to change the mapping of international climate governance actors. Cities, for example, have become increasingly important and are now among the actors who have a say on this issue. Certain “indigenous” peoples, as they are called in UN terminology, hold interesting prospects in the territories where they live. They have also been accepted at the COP meetings and are part of the discussions, demonstrating a process of “climatizing the world”, although they are not included in decision-making processes.

An increasing number of actors want to express their interest in the climate issue, which has become a major challenge. The environment, society and the economy are the three pillars of sustainable development. The climate, for its part, has this centripetal force which involves taking hold of all sorts of issues and putting them under its umbrella. This reveals both its importance in raising global awareness, but also the fictitious nature of this issue, as the transformations called on by all do not really take place! The latest example is the free trade agreement between Europe and Canada (CETA), which shows no concern at all for climate issues. If Europe allows Canada to sell it its oil sands and dirty energy, it is bad for the climate. We do no need trade at all costs but, on the contrary, cooperation treaties to meet specific issues.

Management of Global Public Goods: what role for international institutions?

In what way does the commons paradigm allow local concerns to be understood in order to address global issues?

The commons paradigm emerged in the 1980s, faced with the failures of interventions by governments and international organizations in Southern countries and, more fundamentally, the criticism of a certain vision of development, structured around the idea of a modernizing State, whereas in developing countries these States are often weak and corrupt.

Furthermore, at local level, market logic has always sought to destroy ancestral forms of the commons or of community resources management (water, agricultural land), particularly in Africa. It is essential to relocate and territorialize climate issues and the commons can play a crucial role in this movement. However, certain countries have become emerging under the iron rule of strong States, such as China, which have imposed sometimes disastrous directions from an environmental perspective, but which have brought significant populations out of absolute underdevelopment.

Is the Paris Agreement reached in 2015 the maximum that international governance can do for the climate? I don’t think so. There are still divisions that still need to be broken over the climate issue, which cannot be solely local. In African countries, where industrialization and electrification still need to be achieved, we must seek to do everything differently. This explains the enormity of the challenges facing Africa, a continent which is experiencing high population growth. The commons paradigm has a strategic dimension in the case of Africa, in order to specifically promote the renewable energies resources of this continent, and sustainable agriculture, in a context of fragmented and corrupt States. 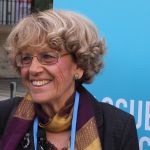