Senior Advisor to the Partnerships Department Director at AFD

On 26 January, the law “for a digital Republic” was passed in France, at first reading and by a large majority, whereas at the same time Parisian taxi drivers had taken to the streets to protest against the development of chauffeur-driven car services (VTC), particularly Uber, which has been able to grow thanks to the mobility, geolocation and development of “platform” companies. These two facts sum up the digital penetration process in our lives: opportunities, changes in models, essential support for transformations. It is a global phenomenon which affects all countries – rich, poor, emerging – and leads us to question the link between the deployment of digital technologies and development processes.

Africa is at the center of these developments and the major international actors have made no mistake about this. In many regions, the development of mobile phones comes directly with access to energy. For Orange, Africa is a major growth driver. Google and Facebook are increasingly present there. An example is when Google decided to build and manage over 800 km of fiber optics in Kampala in order to install broadband Internet in the popular neighborhoods of the Ugandan capital, which incumbent operators did not consider to be sufficiently profitable.

Narrow path between risks and opportunities

It is not, however, only the playing field for international actors. Africans, like everywhere else, are taking ownership of the tools and creating what gives them value: content. If Facebook is more popular than Google on the continent, it is indeed because it is an ideal tool for producing and sharing texts, images, sound and videos, which are created locally and therefore mean something at local level.

The World Bank’s recent World Development Report, which Agence Française de Développement contributed to (AFD, partner of Le Monde Afrique), is devoted this year to “digital dividends”. It analyzes the link between digital technology and development, with the aim of determining in what conditions the former can promote the latter. The path is sometimes narrow between risks and opportunities. As promoters of development, our responsibility is to find and implement the means to materialize these dividends for the greatest possible number of people. This also encourages us to adapt and evolve in order to derive the maximum benefit from the potential of digital technologies.

An initial observation is that there is a real boom in digital technology in developing countries. There are now more owners of mobile phones (80% of the population) than those with access to electricity and drinking water. 950 million Indians have a biometric identity card which allows them to benefit from basic social safety nets. 5 million Chinese small and medium-sized enterprises can export goods all over the world via the Ali Baba platform. Thanks to mobile banking, the concept of which was first rolled out massively in Kenya, over 300 million people, the majority in Africa, have access to banking services without a bank account. Finally, every day, research allows us to discover in what way the “data revolution” and big data contribute to development, by identifying the patterns for the spread of an epidemic, analyzing population displacements, relieving traffic congestion in a city like Abidjan, or in Senegal, identifying vulnerable populations in the areas the most exposed to the consequences of climate change.

These figures and experiences must not mask another reality, that of digital isolation. While there are mobile phones everywhere, in 2016, 400 million people do not have access to the network and only 15% of the world’s population is connected to broadband Internet. Inequalities in access continue to exist, to the detriment of woman, the elderly and rural communities. In countries with a higher penetration rate, an inappropriate regulatory environment can be a source of rent, inequality and control.

Yet connectivity has become a need as much as an aspiration, even in the most extreme cases of deprivation. The wonderful film Timbuktu, by Abderrahmane Sissako, which describes the reign of terror of religious extremists on the edges of the desert in Mali, also shows another reality. Kidane, the Tuareg herder, has left to look for his young shepherd and favorite cow, nicknamed “GPS”. His daughter Toya climbs to the top of a dune and, holding a mobile phone at arm’s length, tries to connect to a network so that she can call her father.

So, what conditions have to be met to foster development, especially for the most vulnerable communities?

There would appear to be four necessary ingredients. Firstly access. Beyond Google’s balloons and Facebook’s satellites, the real issue involves access to energy, undersea cables, backbones, subnetworks – particularly for the last kilometers.

Secondly, skills are essential in order to take ownership of these technologies. Today, they are sometimes lacking, both in the public sector and private sector, which prevents administrations and communities from fully reaping the benefits of these tools. They are subsequently likely to destroy jobs rather than create them and increase inequalities rather than reduce them.

The issue of governance and regulation is essential in order to avoid concentration and promote innovation, while taking care to ensure there is equal access to the resource. Indeed, “physical” access means nothing if the costs are exorbitant, not due to reasons of infrastructure, but because an inappropriate regulation offers a rent to a limited number of operators, despite a poor service. The few African countries which have liberalized their telecoms market are also those where the service is the poorest.

Finally, the obligation of States to be accountable is decisive in guaranteeing the protection of the private lives of citizens, the neutrality of Internet, and its use for the benefit of populations, in order to ensure it is a participatory development tool and not a control tool.

Much remains to be built in African countries, which must not miss this window of opportunity. Digital technology is likely to multiply the results of a good public policy, as much as it can amplify the consequences of a poor policy.

Innovative uses for the long term

The work of donors consists in assisting governments, cities, companies, and associations in creating or strengthening these four prerequisites for digital technology that benefits development. But they must also integrate the reality of digital technology and its possible uses into their own actions: by using data that is closer to grassroots level, more extensive, and rapidly accessible for the identification, structuring, assessment and measurement of project impacts; by supporting the development of innovative uses for education, health, mobility, and facilitating their widespread roll-out; by allowing citizens to participate via crowdfunding platforms; by working with the media and digital actors (pure players) of development, whether public, private or hybrid.

Finally, it is necessary to bear in mind the fact that beyond this feeling of acceleration, development is a long-term process. Indeed, digital technology can strengthen an illusion of controlling the present and future and bring us back to short-term rationales, whereas we should especially learn to live in complexity and uncertainty, and look ahead to the long term. 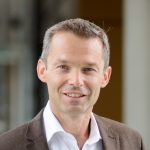 Senior Advisor to the Partnerships Department Director at AFD