Fresh water, blue gold? As water resources become scarcer and demand continues to grow, financiers are turning water into an object of speculation and a commodity like any other. In the process, they are threatening human rights. 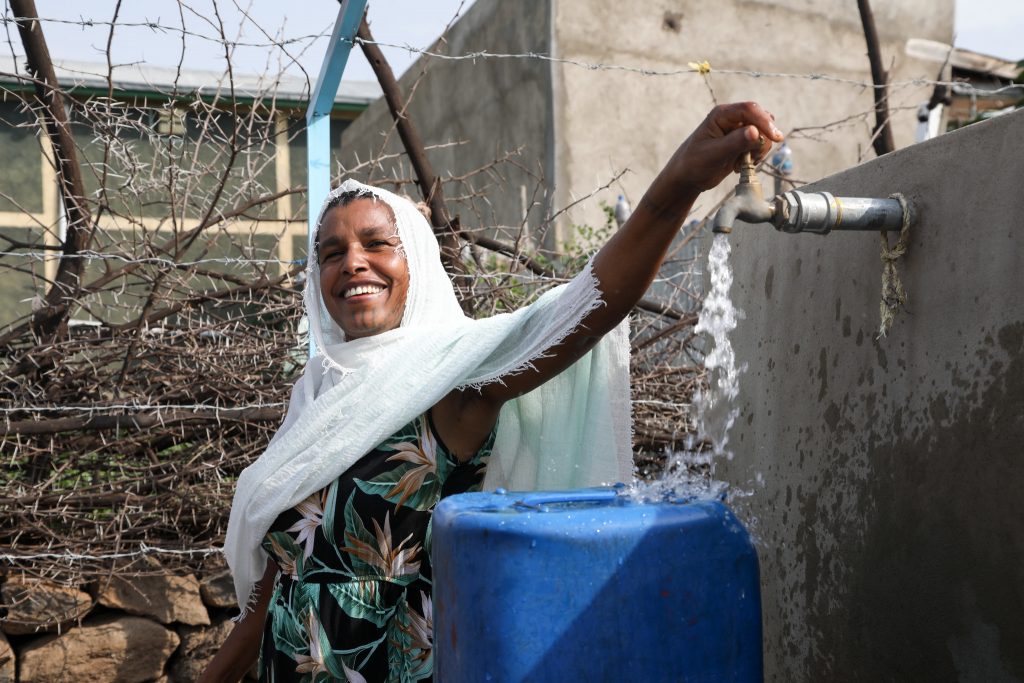 Access to drinking water has been recognized since 2010 as a fundamental human right by the United Nations. Here in Ethiopia, a woman collects drinking water from a tap in the village of Wolenchiti to bring it back to her family. Credit Anna Dubuis DFID

By 2030, the global demand for freshwater is expected to increase 50%, leading to a 40% shortfall in freshwater resources, according to the United Nations. This increase in demand for water, correlated with population growth, seems just as inevitable as increased water scarcity caused by global warming. Rural populations and the most vulnerable individuals, with less secure access to water, are the most likely to suffer from the resulting gap between supply and demand.

In this context, water is beginning to be perceived as an object of value, directly translated into financial market assets, a “blue gold” of the 21st century to be monopolized, collected, processed and sold, just like oil in the 20th century, for the benefit of a few owners.

Turning a natural resource into a financial asset means first of all separating the different elements of an ecosystem to establish specific property titles that can be bought and sold. The financialization process starts with the privatization of national water services, which began thirty years ago in England under Margaret Thatcher and was then reproduced in numerous African countries.

Although water has long been a commodity in the form of the bottled mineral water industry, the phenomenon is taking on a whole new dimension in countries where water has now entered speculative markets. As director Jérôme Fritel shows in his recent documentary “Lords of Water”, periods of drought are now synonymous with good business for the financiers. They have taken hold of water distribution systems, putting farmers out of business because they are unable to pay the new price of this blue gold, which is essential for their business and to provide people with food.

As surprising as it may seem, the existing cases of water financialization around the globe have often earned the approval of some environmental groups. How can that be? According to these groups, by showing how scarce this mismanaged natural resource is, the commodification of water may encourage people to adopt more sensible consumption habits.

See also:
“Access to drinking water and sanitation is a fundamental human right”

“People must be made to pay the true price for water for them to understand that there is a cost involved in every sip. […] How can you convince them to reduce their consumption if you give it to them for free? ” Willem Buiter, special economic adviser for Citigroup, argues in the documentary by Jérôme Fritel.

At the same time, only 3% of the water used in the world is recycled, and over 80% of waste water from human activity is released into rivers or the sea without any decontamination measures.

The Right to Water Under Threat of Financialization

Since 2010, the UN has recognized access to clean and safe drinking water as a basic human right that is “essential to the full enjoyment of life and all other human rights.” Water is the foundation for all other basic rights, from food to health to gender equality. The unregulated financialization of water exacerbates global inequalities and threatens the survival and livelihood of populations living in areas that are already particularly vulnerable to water stress, such as the Sahel, West Africa, northern Australia and Central America.

Available to the wealthy, global water resources, until now considered a common good of humanity, would reinforce the monopolies that already exist in the agricultural seed industry, placing elements essential for human survival in the hands of a few. According to activist Maude Barlow, recipient of the alternative Nobel prize for her work on the recognition of water as a human right, “the ecological and human right crises must be tackled with good public policies. We must take care of water, we must stop exploitation and uncontrolled withdrawal, stop polluting it and guarantee the right to access clean water for everyone. This won’t happen if large corporations continue to control water.”

However, as former UN Special Rapporteur for water and sanitation Catarina de Albuquerque explains, keeping water resources in the public domain will not be enough to resolve the global water crisis. She believes that the governance of this common good must be more concerted and effective, and must receive greater attention from decision makers: “The lack of good public policies is sometimes due to a lack of knowledge or competence by governments” on a topic that does not gain votes. However, for the United Nations, 2018–2028 is the “Water Action Decade”. This is a defining moment, in which governments and citizens will have to decide whether or not to monetize this right to life.