Expert Leader on Environment, Energy and Raw Materials of the Groupe Renault

Is the automotive market continuing to grow despite a gloomy international economic environment and its adverse environmental impacts?

How is it possible to reduce greenhouse gas emissions in this context?

We cannot stop consumers from wanting and having a car. However, we can promote practices such as eco-driving, car-pooling and car-sharing. The use must be adapted to its real needs.

In any case, sustainable growth requires analyzing the environmental benefits over the full life cycle of a car. Consequently, our role involves marketing vehicles with zero in-use emissions and minimizing the carbon footprint over the life cycle (manufacturing and use). For the moment, 97% of the world’s vehicle fleet runs on petrol or diesel. This is an addiction to oil. Experiments with biofuel have been conducted in Brazil, and with natural gas, but they remain marginal, and there are also environmental debates over these sectors.

More specifically, what does Renault do to minimize its environmental carbon footprint?

Our group gives priority to the circular economy: it involves dismantling old cars and recovering the parts to renovate them on our Choisy-le-Roi site near Paris in order to reuse them in our after-sales network. We work with the Indra network, which handles 400 dismantling points in France. Indra is a joint venture between Renault and Suez Group, which aims to improve the collection and conversion of end-of life vehicles, of both parts and equipment, as these competencies are not our core business. We have a 70% recovery rate for our mechanical components and 30% of raw materials which have a second life are used in the composition of our new vehicles. Research and development projects are ongoing in partnership on textiles, glass, technical plastics and batteries for electric vehicles.

In addition, the Renault-Nissan Alliance has 50% of the global market share for electric vehicle sales, with 280,000 vehicles already sold on a high-growth market. For example, 175,000 electric vehicles were sold in the world between January and September 2015, up 63% compared to the same period in 2014. There are 68,000 more electric vehicles in the fleet in Europe, 53,000 in the USA, 37,000 in China and 11,000 in Japan. We sell a lot to public or corporate fleets, but also to individuals.

The principles of the circular economy can also be applied to electric vehicles. The Lithium-ion batteries in these cars can have several lives. Indeed, when a car reaches the end of its life, they only lose 25% of their charge capacity. Renault works to give them other uses, such as the storage of intermittent energies, from solar panels for example. We have projects in the construction industry with urban planners, entrepreneurs and builders to give a second life to electric batteries. They can supply supplementary heating, domestic appliances and industrial buildings, as is the case with our program with Bouygues Energies & Services.

Do you also have this environmentally responsible behavior in developing countries?

We have a global environmental strategy. For example, our plant in Tangiers, in Morocco, is the world’s first automotive site to be practically “zero carbon”, with a renewable energy consumption from a biomass boiler which recycles local residues, and the use of wind power.

Are electric cars really so ecological?

The commitment made by a number of governments to invest massively in renewable energies should be noted. This was widely hammered home during COP21. It will reduce carbon intensity in the European and global energy mix.

For example, on a well-to-wheel basis, a Clio emits the same level of CO2 everywhere. Our model for the electric Zoe already has a carbon footprint ten times lower than the Clio in France, Norway and Brazil, but still 1.5 times higher in China, where power generation is coal-based. Even in these conditions, the immediate effect that a fleet of electric vehicles has on air quality does, nevertheless, provide a fundamental benefit in highly polluted cities, which are regularly victims of “airpocalypse”.

Having said that, half of the new installed capacity in the world to generate electricity is based on renewable energies. Consequently, by 2030, the same Zoe will have quite a different carbon footprint, which will be reduced fourfold. The carbon footprint will therefore be half that of the Clio, still in China. The reason for this? Firstly, in the long term, oil prices will only increase and renewable energy prices are constantly falling. Solar energy will be cheaper than oil-based energy: the difference can already be seen on certain markets and will become increasingly widespread over the next few years. Renewable energy has many advantages: it is a local and shared resource. It will reduce dependence on petrodollars and alter global geostrategic issues. It is possible to reconcile the environment and securing energy supply sources.

Do you recommend electric cars for African countries?

They do indeed have strong potential because of the multiple uses offered by the battery: it can effectively store solar energy and restore it at home when the engine is turned off, if there are power cuts for example. Cars will fit in with human needs and not only mobility. We know that Africa is the market of tomorrow. The continent is making impressive technological leaps: it has passed directly to mobile phones, without landlines. Let us hope that the same will happen for mobility.

During COP21, Ségolène Royal launched an international appeal for the production of an electric car at less than USD 7,000, i.e. half the current price of a Clio (EUR 15,000) and a third of the price of a Zoe (EUR 22,000). For the moment, electric cars are still too expensive for Africa, but in the future, we will be able to try to replicate what we have succeeded in doing with combustion engine vehicles (conventional cars running on fossil fuels, Editor’s note) in our Global Access range, such as the Kwid, which has been on sale in India since September with a base price of EUR 3,500. For the moment, we have six models in the Global Access range. They are real cars which do not compromise on safety and deliver performance, while remaining fuel-efficient, but they are still not electric. It is an immense challenge, but the needs are equally immense!

What do you expect from policymakers to further reduce your carbon footprint?

That the 186 countries which have submitted their action plans for COP21 continue resolutely down this path, with clear mechanisms and defined trajectories, and we will be up to the mark! 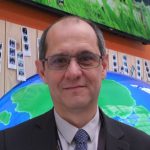 Expert Leader on Environment, Energy and Raw Materials of the Groupe Renault