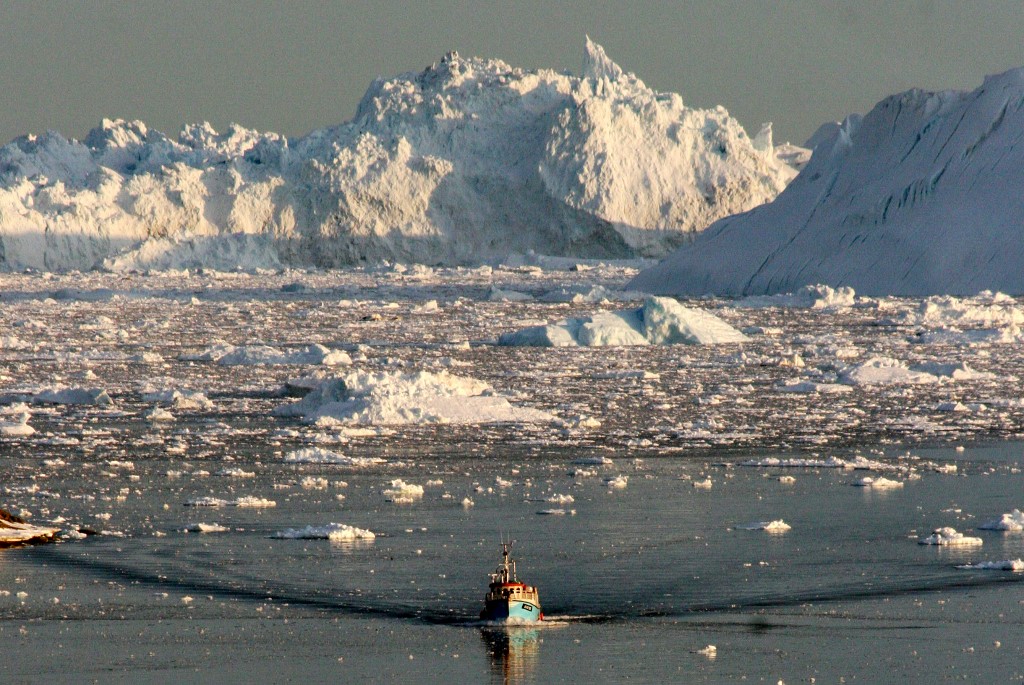 A boat skims through the melting ice in the Ilulissat fjord on the western coast of Greenland in 2008. Photo by STEEN ULRIK JOHANNESSEN /AFP

Lawyer Arnaud Gossement recalls the presentation of the environmental report, released in 2019 by the French Ministry for Ecological and Inclusive Transition: “Some of the scientists in the room were utterly devastated.” But why was so much emotion on display? This was the first time a government body of such high-level importance had based its approach on the concept of “planetary boundaries”. Worthy of a disaster movie, the term refers to the biophysical processes involved in keeping the planet stablilized, which have been disrupted by human activity to such an extent that we are approaching breaking point.

In their book on the subject, researchers Aurélien Boutaud and Natacha Gondran explain the specifics of the term. Firstly, it refers to earth-system processes, which occur on a planetary scale. These include the intensification of the greenhouse effect, which is at the origin of climate change, the erosion of the ozone layer and ocean acidification. In a more localized manner, disruptions to nitrogen and phosphorus cycles, as well as freshwater cycles, affect the resilience of regional ecosystems.

Secondly, it covers the mechanisms which have an impact on the biosphere, such as a loss of biodiversity, as well as changes in land use, which result in the destruction of natural or semi-natural environments for use as farmland. Lastly, the introduction of new substances into the biosphere, particularly chemicals, and the atmospheric aerosol load are two major anthropogenic pressures that have not yet been quantified.

See also:
Soil pollution: A silent threat in the ground beneath us

The Earth viewed as a system

This idea first appeared in an article published both in the Nature and Ecology and Society journals, and signed by researchers at the Stockholm Resilience Center, under the direction of Johan Rockström, a professor of environmental science. However, the concept of “planetary boundaries” was not developed until the early 1980s, at a time when fears about the suitability of the planet for human inhabitance were resurging. According to Aurélien Boutaud and Natacha Gondran, it became clear that “planetary boundaries do not just relate to the finite nature of resources, [but] they also reflect the limited capacity of certain mechanisms.”

The philosopher of science, Sébastien Dutreuil, remembers the controversy that broke out among the scientific community at the time: “In 1980, climatologists, geochemists and ecologists, among others, called for the establishment of research programs on global climate change, to examine interactions between parts of the Earth’s system that had previously only been studied in isolation, such as biogeochemistry and climate physics. This institutional enthusiasm then led to the creation of the International Geosphere Biosphere Programme (IGBP).”

Two decades later, by the end of the 1990s, some of the scientists who had contributed to the IGBP, had developed new types of models: “These so-called ‘intermediate complexity’ models comprise more interconnections and processes than conventional climate change models,” said Dutreuil. These various studies will gradually help to reframe the debate on ecology: “IGBP experts pushed new concepts into the sphere of public debate, such as the Anthropocene, which refers to the dawn of a new geological epoch linked to human activity, or the idea of ‘tipping elements’, meaning large-scale components of the Earth system (i.e. the ice cap or the Amazon forest), which are at high risk of undergoing a sudden and irreversible transition.”

Are planetary boundaries scientific or political?

Since then, the idea of planetary boundaries has clearly had some success among major stakeholders in environmental issues, whether it be the former United Nations Secretary-General Ban Ki-moon, who has been using the term since 2012, the European Parliament, whose 7th Environment Action Program for 2013-2020 is entitled “Living well, within the Limits of our Planet”, or the French Ministry for Ecological and Inclusive Transition, in its famous 2019 report on the state of the environment.
In France, defenders of integrating planetary boundaries into the Constitution include Marie Toussaint, co-founder of the association Notre Affaire à Tous and, today, MEP for the party Europe Ecologie Les Verts, as well as Dominique Bourg, member of the scientific committee of the Fondation pour la Nature et l’Homme. Toussaint points to the importance of taking into account planetary boundaries when developing public policy: “According to the European Environment Agency, we still need two to three more years of research to develop precise, stable and solid quantification instruments, that can be used as genuine tools of governance. But we also need a political debate on planetary boundaries, because responsibility for meeting or exceeding these boundaries is not the same everywhere.”

Bourg is more concerned with the educational and symbolic aspects of the term: “Planetary boundaries are not part of the same transient system of public policy. Their primary interest lies in their rhetorical function. They mark the beginning of the Anthropocene.”

A large-scale issue at the core of planetary boundaries

In contrast, philosopher Catherine Larrère believes that the blurring of scientific and legal perspectives could pose a threat: “We are talking about two very different types of logic. For example, the legal rule of equality, by which all people are born free and equal under the law, does not rely on any scientific data. Legal norms cannot be completely dependent on regularly revised scientific content.”

Hence why, in practice, the theory of planetary boundaries has met with a certain amount of controversy. José M. Montoya, member of CNRS, questions the relevance of the term “boundary”, or the often-cited “point of no return”, in referring to the degradation of ecosystems. There is also the issue of scale: “IGBP members make claims and theorize about working on a global scale. And yet, in the beginning, the scope of research for ecologists was a single lake or pond… Ecologists have been badly affected by the shift towards a global model,” said Sébastien Dutreuil.

However, this problem of scale raised by life scientists could also be an issue for lawyers in the future, if the concept of planetary boundaries were to be written into law. According to Natacha Gondran, “the crime of ecocide highlights the accountability of the most harmful players involved. But with the concept of planetary boundaries, we are all potentially accountable. It is the culmination of all of society’s modes of production and consumption which is having the greatest impact on the planet’s capacities.”

Ecocide, autopsy of a “crime” against the planet

“Ecocide”: this term, while not well known until just recently, has made a dramatic entrance into current discourse. Driven by members of the Citizens’ Convention for Climate, which submitted its recommendations to the French government in June 2020, the government just proposed establishing an “ecocide offense.”

Etymologically speaking, this word refers to the “crime” (from the Latin word occidere) committed against the “shared home” (from the Greek word oikos), that being our planet. It first appeared in 1970 when the biologist Arthur W. Galston used it to denounce the United States Army’s use of a particularly toxic defoliant known as Agent Orange, which sadly became a well-known weapon of war in South Vietnam. While the chemical dioxin that Agent Orange contained caused serious health problems among those who were exposed to it, the herbicide also destroyed half of the region’s mangroves and nearly 15% of the forests. Formed to reflect the word genocide, the term ecocide is powerfully evocative. And just like for genocide, Galston advocated to have what he considered to be intentional destruction of the environment recognized in international treaties.

Nearly five decade later, countries like Vietnam as well as Ukraine, Russia and Georgia have now included it in their criminal code, and France is preparing to do the same. We would like to present a four-episode series that examines the stakes connected with recognizing the offense of ecocide.

How has the concept of ecocide come to the fore in the public debate to the point where today it is about to enter into the French criminal code [episode 1]? It finds itself front and center in a worldwide movement advocating for legal consequences for ecological causes at local and global levels [episode 2]. It’s this same movement that established the framework of ecocide, defining it as breaching the “planet’s boundaries,” a concept that for several years now has seen a certain amount of success in political ecology [episode 3]. To bring the series to an end, we chose to speak with a major figure in ecological philosophy and green thinking, the philosopher Catherine Larrère, a specialist in environmental ethics [episode 4].

Soil pollution: A silent threat in the ground beneath us