Increasingly reliable new tools such as early warning systems make it possible to anticipate climate-related disasters more effectively and prepare for them, provided that the least developed countries can benefit from them. 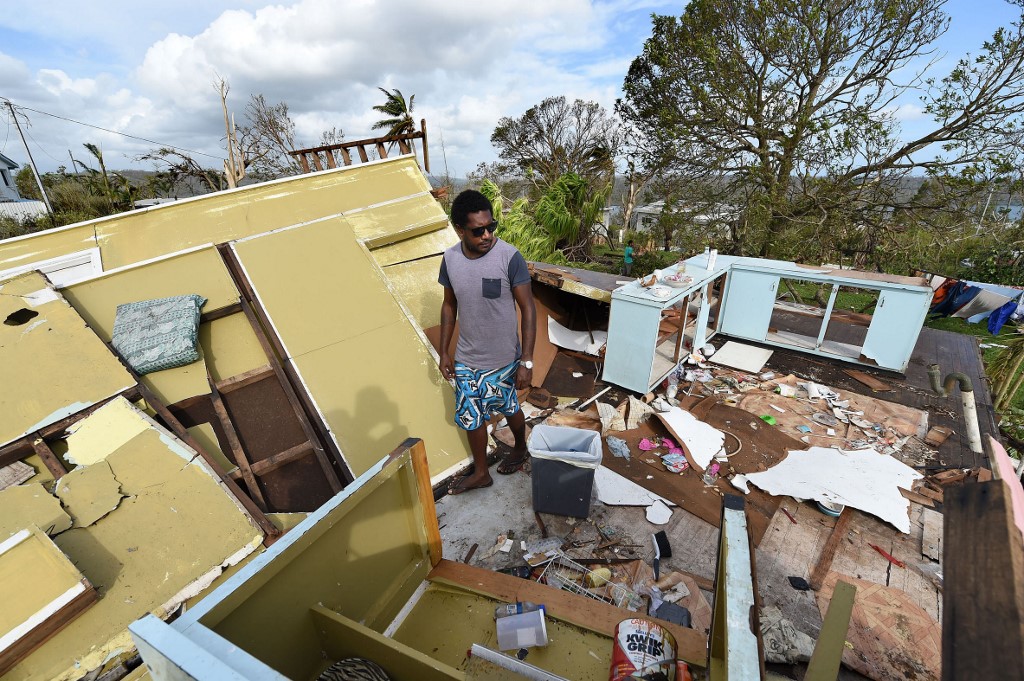 On March 16, 2015, in Port Vila, the capital of Vanuatu, after the devastating passage of Cyclone Pam. (Photo DAVE HUNT / POOL / AFP)

From summer heatwaves in Europe to recent flooding in Niamey and southeast France, and cyclones in the Pacific (such as Harold in April 2020), climate-related disasters have sadly been prominent in the world in 2020, and their impact is greatly increased due to the Covid-19 health crisis. Although the year has not yet ended, the cost of damage caused over six months is already estimated at $75 billion. This figure could become much higher at the end of the year when the National Oceanic and Atmospheric Administration (NOAA) forecasts a La Niña episode. This type of episode generally leads to extreme events in several regions of the world.

On the global scale, the number of such events has increased threefold over the last 35 years, with growing costs. Current climate-model-based projections for the end of the 21st century do not provide predictions for all types of risk, but indications of their intensification clearly emerge in several regions of the world. This is the case for heavy rain and flooding in West Africa and Europe. Without a dedicated adaptation strategy, the average annual losses due to flooding in Europe could thus increase from today’s €1.6 billion per year to €5.5 billion in a “+3 degrees” scenario.

See also:
« The level of national contributions taken before the Paris Agreement must be re-vised upwards »

The World Meteorological Organization (WMO)’s 2019 annual “State of Climate Services” report underlined the importance of seasonal and weather forecasts for agriculture throughout the world. The 2020 edition focuses on the role of warning systems in reducing the risk of disasters, highlighting the special situation of the Least Developed Countries (LDC).

Paradoxically, in many cases, these disasters are predictable and can even be forecast relatively reliably. The various meteorological and sector-specific models, such as those relating to flooding, have developed sufficiently well in recent years––thanks to progress in research and increased computing capacity––to reach satisfactory levels of precision. Météo France considers that its forecasts of the types of weather to be expected in the forthcoming 24 hours are accurate in 90% of cases. Similarly, the risk of flooding in west Africa during the 2020 season was clearly highlighted by the PRESASS forum. The risk of flooding in Niamey at the end of August was identified several days beforehand by several warning systems.

In fact, there are a significant number of early warning systems––free or otherwise––alerting to the imminence of various dangers, including cyclones, floods, fires, etc. Their timescale can range from a few hours for a specific event to a more general forecast for the forthcoming months, enabling users to anticipate whether a cyclone season will be intense, normal or somewhat calm.

For LDCs and small island states, such systems are recognized as priority tools in the process of adaptation to climate change in 88% of Nationally Determined Contributions, the roadmaps submitted by each country that is a signatory to the 2015 Paris Agreement.

However, the WMO’s 2020 report highlights geographical disparities in how well countries are covered by multi-risk warning systems. Although 50% of European countries state that they have such a system in operation (32% did not respond), this figure falls to 30% in Africa (18% did not respond) and 23% for all LDCs.

The capacity to acquire the meteorological data that is necessary to the effective operation of early warning systems is much lower in the LDCs, particularly in Africa, than in the rest of the world. In 2019, only 26% of the surface meteorological stations in the LDCs belonging to the Global Climate Observing System supplied data automatically and regularly––as they are expected to do––compared with approximately 80% in Europe.

These difficulties with the upkeep of existing equipment are mainly due to high maintenance costs and, to a lesser extent, a lack of competence to carry out repairs. The absence of data makes it impossible to establish a baseline for the hazard: in the Caribbean, for example, the absence of coherent flood risk maps at national level hampers disaster and land-use planners in making important strategic decisions.

Deficiencies in broadcasting warnings and in preparedness

Data acquisition does not explain everything, however. As the WMO’s 2020 report states, detailed analysis of LDCs’ early warning capacity reveals deficiencies, particularly in the broadcasting of warnings and in the reaction to them, which does not occur early enough: only 20% of these countries are considered as having acquired a genuine capacity to prepare for disasters.

Thus, being able to forecast the risk correctly is only part of the problem: it is then necessary to convert the information efficiently into action. For example, anticipating the arrival of hurricane Irma in 2017, the Dominican authorities were able to shelter 3,000 people in purpose-built structures. This measure, although seemingly simple to put into place, required the authorities to have at least previously defined the decision-making mechanisms and to have identified, or built, enough shelters. By way of comparison, having enough shelters was a serious challenge for Vanuatu when cyclone Pam devastated the region in 2015.

Illustrating the importance of preparedness for, and improved response to, this type of crisis, a recent study conducted in the Caribbean revealed that storms occurring on Mondays had a greater negative impact on the inhabitants, and even on the economy as a whole, than those occurring on other days of the week. This may be due to challenges faced by authorities in collaborating on and disseminating broadcasts announcing risks if the alert is given at the weekend, as well as to a lower level of awareness on the part of users.

Inadequate development of the ability to broadcast, prepare for and react to these warnings may be partly explained by the fact that it is not a high priority for international donors. Focusing on West Africa, the WMO report identifies nearly $2 billion currently devoted to projects supporting meteorological and hydrological services. Only 28% of those projects include a “preparedness and reaction” component.

Similarly, in the Philippines, only 16% of international humanitarian aid is allocated to disaster preparedness and prevention. The majority of finance is linked to major events.

Donors must re-direct part of their current funding to encourage more ambitious disaster prevention measures. They should also prioritize this kind of support for those countries that are at the greatest risk (particularly the LDCs), for whom the issues described above are the most flagrant.

Release funds even before the disaster

Donors should also establish more agile financing mechanisms in order to respond more quickly to disasters or even to act before they occur. It is good practice to establish a contingency budget, not specifically earmarked and available immediately when disaster strikes. The difficulty of making funds available quickly hinders the initial response to a disaster: by the time the disaster has been recognized as such and the money released, sent to the area and spent, that money has already become much less relevant.

The Forecast Based Financing mechanism (FbF) aims to address this shortcoming: it allows funds to be disbursed even before the disaster occurs, when it appears imminent and when certain indicators (for example rainfall forecast over the forthcoming 72 hours) exceed probability thresholds previously defined by experts, local authorities and civil society. These funds may, for example, be spent to the direct benefit of people at risk in target areas. In Bangladesh, where this system was established in 2019, the mean cost of flooding was reduced by 30% in zones where the FbF mechanism was applied.

A number of these initiatives relating to the development of early warning systems in developing and emerging countries are indeed currently being supported by bilateral and multilateral donors (AFD, African Development Bank, World Bank, DFID, USAID, etc.). But it is necessary to consider their long-term durability and to consider the need for new revenue streams to cover infrastructure maintenance costs.

It is estimated today that $500 million need to be collected every year to ensure good maintenance of equipment in sub-Saharan Africa. The options for achieving this include the creation of public-private partnerships between national meteorological services and certain private enterprises (agribusiness, aviation, tourism, etc.) in order to generate ad hoc fee-paying services for these companies (forecasting of certain specific variables and with increased precision) thus providing stable revenues.

At the same time, it is essential that academic research be carried out into the socio-economic impact of these information systems in order to justify the size of the budgets allocated to them. Only by adopting a long-term approach to meteorological services and ensuring their budgetary stability will they be able to successfully fulfil their mission.

By Denyse S. Dookie Post-doctoral research officer at the Grantham Research Institute on Climate Change and the Environment at LSE