Financial transactions made in cash are decreasing in the developed world, but remain high in developing countries. This further hampers their economic development, as explained by Tidhar Wald, Government and Corporate Relations Specialist at the Better Than Cash Alliance, a global coalition housed by the United Nations Capital Development Fund (UNCDF) in New York since 2013.

What is the purpose of the Better Than Cash Alliance?

This global partnership was launched in late 2012 with the aim of bringing together governments, NGOs, UN agencies, donors and companies in order to speed up the transition towards electronic or digital means of payment around the world. It currently has around fifty members, which include the Bill and Melinda Gates Foundation, USAID, the Inter-American Development Bank (IDB), as well as 25 governments (including India, Mexico and Senegal), which have committed to the United Nations to end cash payments in their administrations.

Our action involves conducting advocacy and research, and providing technical assistance to governments. The secretariat based in New York is housed by UNCDF, a UN agency under the aegis of the United Nations Development Programme (UNDP), and which works on issues including financial inclusion.

Why do cash payments hold back development?

Cash transactions do not give many opportunities to the people who make them – and often result in a big waste of resources and time, not to mention the risks of loss or theft.

In addition, there are real risks of resources being drained through corruption at each stage of these transactions. An example: female workers in a textile factory in Bangladesh have to queue up to collect their salary every two weeks. They subsequently have to go and pay school fees and water and electricity bills in cash, draw eventual benefits, and sometimes give backhanders to officials. Paying salaries electronically via bank cards, mobile phones, or any other technology, provides poor people with access to the banking system and reduces corruption.


Yet today, we have all the technologies to carry out secure digital payments throughout the developing world. In addition, we have conducted research with the Government of Mexico which shows that the administration saves USD 1.3bn a year by making all its payments using electronic or banking methods. Another study conducted with Coca-Cola in Nigeria has shown that electronic payments reduce risks of theft during truck deliveries to bars. For example, on a market in Lagos, a Coca-Cola truck is full of cases of bottles in the morning… At the end of the morning, it is mainly carrying cash and becomes a target for thieves. When Coca-Cola started getting its distributors to pay via bank accounts, its insurance charges dropped considerably.

Is it possible to move towards a cashless world, while Africa is far from having widespread access to the banking system and being connected to the Internet?

Four prerequisites for Africa to fully benefit from digital technology


What are the main barriers that need to be removed for this transition to come into being?

There are many of them! For example, one of them concerns “interoperability”. When an individual is a subscriber of a cellphone operator, he cannot always transfer money to a competitor via mobile banking, for example. Why? Because the private sector is not willing to take risks and invest in a market where the majority of customers only have low purchasing power.

It is for this reason that the Better Than Cash Alliance encourages government authorities to pay salaries, pensions and benefits electronically. As a result, a market is created for the private sector. This stage requires everyone in the public sector to understand the interest of this transition. Consequently, we get all the stakeholders together, particularly the ministries which have a sizeable payroll – Health, Education, Defence – in order to encourage them to pay their officers electronically. This leads to the political decision to make these payments electronically or digitally, and to working together with the private sector and donors to facilitate the digitization of payments at the same time. To do so, it is necessary to create an appropriate legal and regulatory framework for the digitization and construction of payment infrastructure and, finally, for the creation of financial products tailored to the needs and constraints of the unbanked population.

How can the problem of interoperability subsequently be resolved?

The Peru has provided an interesting example by creating the first mobile payment platform in the world. The aim is to reach rural populations and extend access to financial services. The Better Than Cash Alliance worked with the Association of Banks of Peru in order to get banks and telephone operators round the same table and launch a platform called BIM, which allows all citizens to have access to a bank account via their mobile phone. The fact that everyone accepts to use the same tool not only resolves the problem of “interoperability”, but also stimulates competition. Both banks and operators compete to offer better products, targeting 4 million unbanked Peruvians by 2020.

How do you conduct your advocacy?

Since 2013, we have been an official partner of the G20, which has understood that growth also involves providing access to the banking system and digitizing payments. We are working with the World Bank, IMF and World Economic Forum to ensure that we think about digitizing payments whenever it comes to financial inclusion, transparency or access to public services.


What do you expect from donors?

Three things. Firstly, for them to make their own payments electronically, as USAID has pledged to do, for example.

Secondly, for donors to encourage their partner governments to make their payments electronically in order to increase transparency and traceability.

Finally, we ask them to be open to technology in order to support projects which may appear to be a little bit too innovative, but which do, however, have high potential. In Jordan, for example, Syrian refugees have bank accounts on Cloud, which allow them to do their shopping in supermarkets by being identified through the iris of their eyes. This project is supported by the United Nations High Commission for Refugees (UNHCR). 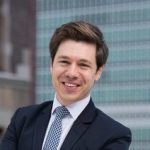