Project Manager in charge of History and Strategic Reflexion at AFD

“32% of French people have reservations about the idea of increasing aid. But what is it all about? This policy is by nature hard to justify, yet it is essential.”

What are Official Development Assistance policies?

The OECD’s Development Assistance Committee has given a definition to Official Development Assistance (ODA). The aim is to compare donors’ efforts, which are recognized on the basis of financial resources and a restrictive list of beneficiary countries. Aid has a very broad objective. The approach was originally based on movements recorded in the beneficiary’s balance of payments. ODA subsequently included other operations, such as schooling or expenditure for refugees in donor countries… Consequently, ODA initially started with an accounting approach, but is no longer a value that makes sense at an economic or budgetary level, or in terms of the balance of payments. Yet the aim of the underlying logic of comparing efforts is for policy formulation to be determined by the notion of aid – in order to maximize the generosity indicator – more than by a spirit of promoting development. Certain guarantee activities, which would have leverage, are thus not taken into account.

It involves entrusting public funds to other far-off and uncertain States (first distance) for activities that exceed the usual budgetary scope. In addition, the duration of a project means that it can be conducted in a manner that diverges from the initial ideas (second distance). This leads to a twofold lack of confidence. Faced with the problem of justifying an unverifiable activity, this policy has developed four legitimation strategies.

The first strategy is to focus on the quality of processes. This initially requires establishing a close link with “science”. The aim of rigorously codifying the appraisal of operations and great diligence in introducing new administrative techniques is then to show that there is leading-edge management.

The second strategy lies in highlighting a rhetoric of common interest: if it is not possible to prove that this will be effective in the recipient country, it is necessary to convince that it at least benefits the donor country. The interdependence between the prosperity of metropolitan areas and of remote territories was present right from the arguments used in the parliamentary debates for the Colonial development act en 1929. It can also be found in UNDP’s work in the late 1990s, with the concept of global public goods.

A third approach lies in an institutional sophistication in all directions, from private (Company of the Indies) to public (colonial administration), and from public (aid agencies) to private (private investment finance agencies – e.g. Proparco [ed. a Development Financial Institution partly held by AFD], CSOs), from national to multilateral, from national to local governments, from the donor to the beneficiary (involvement of assisted countries in the process of the Paris Declaration on Aid Effectiveness).

Finally, aid proceeds by a strategic enlargement, moving from concentrating entirely on economics to include social aspects (since the 1930s), and subsequently environmental aspects (via due diligence since the 1980s), from local projects to sectoral policies, national policies or global policies on climate or health…

These changes make development assistance the most increasingly important component of a global diplomacy. Aid is the first form of redistribution in the world. It is a way of stimulating international cooperation and an adjunct to multilateral negotiations (for example, the recent creation of climate funds aims to assist in the advancement of the climate negotiations launched in Bali in 2007).

Aid is a tool for standardizing the policies that it contributes to disseminating. Donors’ financing of activities is often combined with social and environmental responsibility requirements. With the period of structural adjustments, financing will strengthen financial orthodoxy. The latter will subsequently prevail even in donor countries, for example in Europe, where the provisions of the Maastricht Treaty on Economic and Monetary Union can be interpreted as a return to standards in donor countries that were initially devised for the recipient countries of aid.

The complexity of this policy makes it an interdisciplinary field. It requires inter-ministerial coordination in order to establish processes that aim to make public policies more consistent. This will, in addition, involve paying closer attention to policies in Southern countries, a new frontier in the process that makes it a comprehensive policy, i.e. global and multidimensional. Official Development Assistance is rooted in long-standing practices and is set to change in nature. It will, however, continue to be a major collective and global resource for the long haul, in a form that is currently being defined. 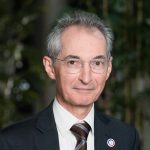 Project Manager in charge of History and Strategic Reflexion at AFD