It is clear from the first interactions on this blog, that development is still above all considered from an economic point of view. Whether the discussions touch on the Millenium Goals, aid for trade, integration or the involvement of new players, the same implicit concerns prevail: production must be increased, exchanges must be intensified and, of course, the distribution of the ensuing wealth must be more equitable, since development is justified by the reduction of poverty.

Several fears do indeed transpire, notably regarding the consequences of climate change, which only the wealthiest continue to deny; the impact of on-going and increasing inequality even in developed countries; and the concern that aid for trade may result in the commercial exploitation of relations between people and nations, and in the impoverishment of the weakest members of society.

Nonetheless, it seems clear that none of this will call the general model into question. Or, to put it another way, given the momentum set by the industrialized nations and then by emerging economies, this development model can no longer be dismantled. It allows internationalization to be regulated rather than limited. Everything converges towards globalization, and in order to accelerate the trade of goods and services, while ensuring transparency, new norms and standards are perpetually being created. Together they provide a hegemonic but imprecise guideline.

In this context, Africa’s problems (probably because they come hand in hand with violence and ever renewed conflicts) are still seen as proof that the continent is lagging behind the others and must catch up. Some consider that this lag is due to the way Africa was forced to integrate in the world economy (slavery, colonization, and the exploitation of raw materials). Others put it down to a lack of awareness or a deviation of the rules of good management and self-promotion accepted by the entire international community. However, this lag has only rarely and marginally been attributed to a refusal to follow a model based on standardization, homogeneity and the accumulation of material wealth. This model should triumph in Africa because it is successful in places that are as culturally diverse as Asia and South America.

Yet, Africa’s increasingly well known history illustrates how other solutions were possible in man’s relationship with nature and within human society.

Africa is not a lost paradise. Violence, domination and inequality were as prevalent as elsewhere. However, the fact that monetary circulation was of secondary importance, the predominant emphasis on personal relationships and the central importance of an oral tradition meant people preferred to create networks rather than institutions, to manage the flow of goods rather than stock pile and favored equitable exchanges to product competition.

Could this explain why Africa has rallied behind the Convention for the protection and promotion of the diversity of cultural expressions? Could it be that the development model followed by industrialized nations is clearly not viable on a world-wide scale?

It is worth reminding those that consider economy and technology as fundamental and determining factors, that, as is the case with living creatures, the standardization and homogenization of cultures is impoverishing and weakening, and in the long run leads to the loss of the sense of risk and challenge which has been the driving force behind the invention of new systems for new contexts.

Nowadays, globalization, and notably technical and financial globalization is a fact with its own dynamics. However, it does not provide solutions to the daily worries and concerns of man. The latter is constantly aspiring to liberty, equality and fraternity, and therefore to the best way of reconciling these three contradictory objectives.

Will a solution to these aspirations be found in the progressive development of a new model or by submitting to the dominant model? The answer to this question will have to be found by Africa’s youth which is clearly increasingly aware of the originality of its cultures, of the promising cross-cultural mixes and of their inadequacies. 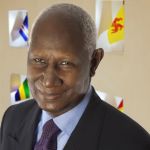