What is the impact of climate change on the basin you are responsible for?

The level of rainfall declines every year and is very irregular – either excessive or insufficient. The only solution is to store water and ensure that it is used in a more rational manner. Adaptation to climate change requires us to control 90% of the river’s water, against 50% today.

This imperative is all the more important because the food security of our populations depends on it. In our region, the efficiency rate for irrigation rarely exceeds 20%. In other words, 80% of the water pumped to irrigate fields is lost along the way.

Are you well equipped to do this?

For the record, OMVS was set up in troubled times in March 1972, already as a reaction to the climate change experienced during the major drought which devastated the entire river valley. The cattle were dying, the fields were no longer irrigated, and saltwater rose from the Atlantic towards land at the mouth of the river in the Saint-Louis of Senegal region.

The countries concerned – Mali, Mauritania and Senegal – got together, and were joined by Guinea in 2006, to create this organization and manage the aquatic resource in a manner which is unique in the world. The entire river and all the structures built on it are jointly owned by the States, with both the costs and income from the dams being shared, for example. OMVS manages the water on the basis of its uses and not in terms of countries. Farmers, as well as herders, fishermen and electricity operators, meet to establish a program based on sharing the resource and making decisions by consensus.

In August 2015, thanks to our concerted management method, we received the top ranking for the “global quotient for cooperation on transboundary water resources”, established by the Strategic Foresight Group, an international think tank based in Mumbai, in a report which reviews 84 river basin management organizations.

Our four countries were the first to sound the alarm over climate change and introduce these constraints in their development programs. All countries on the continent have set up an African Network for Basin Organizations (ANBO), for which we provide the permanent technical secretariat in our offices in Dakar.

What action plans have you implemented?

Our first actions involved building dams, initially in Diama in 1986, 30 km from the mouth of the river, in order to stop the upwelling of saltwater and store 500 million m3 of water, which are used to irrigate 200,000 hectares of arable land. 100% and 50% of the water supply of the cities of Nouakchott and Dakar, respectively, comes from this dam.

Another structure was built in 1988, 1,000 km from the mouth of the river in Mali. The Manantali Dam has a capacity to store 11.5 billion m3 of water, regulate the river’s flow, and produce energy with a 200 MW power plant commissioned in 2001 and a 1,700 km grid which links up the countries. We are going to develop new dams in Guinea, in Koukoutamba and Gourbassi, in order to generate 750 MW of hydropower. Our interconnected power distribution grid is going to be extended to 4,000 km. It will allow us to position ourselves as energy producers between the North and South of Africa.

We are also going to make the river navigable, via a channel, from its mouth in Saint-Louis of Senegal, over a 905 km stretch, to the river port of Ambidédi, an area 40 km from the city of Kayes, in order to give Mali access to the sea. River ports will be built by 2017, in Saint-Louis and Mali, with stops on the river. This USD 200m project will boost agriculture, fishing and the transport of mining products from Mali.

What are the environmental challenges for OMVS?

We need to fight against the proliferation of the Typha, an invasive aquatic plant at the mouth of the river and, especially, protect the mountainous massif of Fouta Djallon, in Guinea, where the river originates, like the Niger, Gambia and other rivers. This West African water tower is vital for 200 million people in our subregion. So, we need to fight against deforestation and bush fires. In 2014, we launched an Observatory of the Fouta Djallon Highlands with the Economic Community of West African States (ECOWAS), with support from the African Development Bank (AfDB) and African Union (AU).

Do you have the means for your policies?

We are financed by member States and the Manantali Energy Management Company (Sogem), which makes profits. States borrow abroad and reallocate the loans to our three independent companies, which repay them. We also have a water management company (Soged) and a navigation company (Sogenav).

We are currently establishing a distribution scheme for the revenues of the energy company, the only one which makes profits to date. Our USD 4bn program for the next five years comprises the extension of our power grid, the construction of four 750 MW hydroelectric schemes, the navigation project, and agricultural development. It aims to promote more water-efficient techniques. 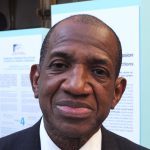