senior negotiator for the of DRC on climate issues

Africa’s priority is not to save the planet, but to reduce its own poverty through inclusive growth. Its development and industrialization can take place by respecting the environment. The green economy comes with a greater cost and gives slower results but, over time, renewable energies reduce the dependence of countries on oil imports. This is foreign currency that could be devoted to other priorities…

Our countries are facing three types of scenario: green, brown or grey. It is up to them to know which one to choose.

However, reducing global carbon emissions is an imperative for Africa. It should be pointed out that limiting global warming to 2°C by 2100, which is currently under discussion, will lead to Sahelian countries experiencing a temperature of 3°C… The water stress that our agriculture is subject to will be even stronger.

What is Africa’s position in the international climate change negotiations?

The continent has not created the problem of climate change, but does want to be part of the solution. Africa is the paradise for renewable energies, with sun, wind, geothermal energy and hydropower. Its huge reserve of arable land can be managed in a more sustainable manner, with an extremely positive impact on the environment.

Our countries, which make up a quarter of the parties to the framework agreement signed at the Rio Summit in 1992, have shown leadership. We were the first to speak about a global target for climate change adaptation related to a global mitigation target. Indeed, adaptation remains a priority for us, because our mitigation potential remains low due to our strong economic and population growth.

What does this adaptation involve?

It involves early warning systems for farmers in the event of a drop in rainfall and the implementation of farming that is more resilient to climate change. Dykes can be built to prevent coastal erosion and protect habitats. Prevention programs must be planned in highland areas where there are outbreaks of diseases like malaria due to the rise in temperatures.

But it also involves a qualitative leap towards a lower carbon development. This is why we need to be supported with financing and technology transfers. Our development must be consistent with a reduction of greenhouse gas emissions that is proportional to our growth. We are not historically responsible for the current pollution, which has built up since the industrial revolution. Countries have grown wealthy by polluting and today have achieved a better standard of living, greater prosperity. It is time for them to dig into their pockets!

Is this not where the real problem lies? Not all of the USD 100bn a year of “climate” finance pledged for developing countries during the Copenhagen Summit have been mobilized…

The USD 100bn announced until 2020 come from different sources… We should bear in mind that this figure stems from a political declaration and is not based on any assessments or studies. It is a minimum and not a ceiling. Everything that follows after will need to reach at least USD 100bn a year.

According to an OECD report, USD 61.8bn were mobilized by Northern countries in 2014 for projects to fight against climate change in Southern countries. Yet anything and everything is included in these amounts, which are calculated using a methodology which eludes us. We find credit exports, loans, projects by multilateral development banks… It does not all necessarily concern climate change, a notion on which, furthermore, there is no consensus and for which we do not have a common definition between developed and developing countries.

The Green Climate Fund launched after the Copenhagen Summit has a capitalization of USD 10.10bn, an amount that has never been seen before. These resources need to be allocated wisely. The rationale could be that every dollar invested by the Green Climate Fund in a given country should be topped up with 1.5 dollars by Agence Française de Développement (AFD) or the African Development Bank (AfDB). This could make the Green Fund a real catalyst for climate change action in order to bring about a paradigm shift.

If we remain with an ideological vision, by which developed countries must put money on the table, we will not achieve the expected results. Indeed, we see that these countries are not true to their word. Post-Copenhagen, USD 30bn of fast-start finance was scheduled for 2010-12, in addition to Official Development Assistance (ODA). Yet independent analyses have shown that only USD 3bn to USD 7bn have been mobilized from new funds and USD 1bn from additional funds to ODA. In other words, money that is used to protect forests in DRC could come from funds that were previously used to finance hospitals in Kenya or education for young girls in Ghana. Developed countries are sure of the fact that they have disbursed EUR 30bn and developing countries are sure of the fact that they have not received them. The differing perceptions and analyses of the financing undermine confidence.

Is it this lack of confidence that makes the negotiations so difficult?

Yes it is. Developed countries consider that the world has changed over the past twenty years and that other countries must also finance efforts to reduce carbon emissions, even if they are not as historically responsible for pollution. Rich countries are pushing for a narrowing of the base of recipients. This is what has caused the incredible uproar in the negotiations. This ultimately boils down to changing the rules of the game set down at the Rio Summit in 1992 during the match.

We have gone from quantified targets in terms of reducing emissions for developed countries, as set out in the Kyoto Protocol in 1997 – which the USA has never ratified – to a bottom-up approach whereby everyone would like to be able to contribute depending on their resources. An analogy can help us to understand this. We are told that to produce 10,000 MW, a 50 m-high dam is necessary. Each project partner is subsequently asked how much they can contribute, with the hope of ultimately having the 50 m! This will, of course, not be the case. The basin will overflow and the city will be flooded.

This is what is happening with the climate. We have 196 countries that are willing to contribute, but there is no longer any ambition. In the background, the negotiations have become a struggle for geopolitical and economic influence, and even a moral and religious problem, since in June, the Pope published an encyclical on climate change. In the USA, the CIA considers that climate change gives rise to an increase in conflicts. This is unfortunately true: a poor mother in Africa will need to go further and further to fetch water because of water stress. Wherever she goes, she will not be greeted with open arms! 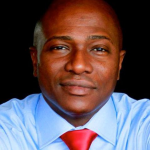 senior negotiator for the of DRC on climate issues