Chairman and CEO of ENGIE

Are climate issues not mixed in too much with the image and Corporate Social Responsibility (CSR) of businesses, casting a doubt over their sincerity?

You just need to look at what we do. For my part, I have convictions. I have been campaigning to raise awareness of climate issues for years. Today, my personal convictions and the well-understood and best interests of companies completely coincide. A climate-related ecological disaster would be an economic catastrophe. In Copenhagen in 2009, business leaders were not convinced by climate issues. There have been marked changes since and headway has been made in the awareness of leaders in the private sector. The world of finance has been turned upside down. The main Anglo-Saxon pension funds now only want to invest in companies that take the climate challenge into account.

What is your group’s position in the global climate debate?

In New York in September, we attended the feedback meeting on the global citizens’ debate on climate change, along with Ségolène Royal, Minister of Ecology, Sustainable Development and Energy , the results of which seemed very striking to me. At least 79% of the 10,000 people who took part in this debate, from Fiji to the USA, say they are very concerned and 66% of them want binding decisions on climate change.

We have decided to organize the same citizens’ debate in our company. We launched it on 10 November in the presence of Ségolène Royal. ENGIE is the first large company to launch this type of debate in France. We have already launched 20 local debates in 12 countries around the world (Thailand, Morocco, USA, Mexico…). The energy transition is underway, we are currently changing over from centralized energy to a decentralized system. What place will we have in the future global system? We are going to organize two forms of dialogue with our 150,000 employees: half-day meetings and an online questionnaire. We will publish the results during COP21.

What will be the decentralized energy systems you have mentioned?

We are going to change over from large power plants to smaller facilities that are closer to consumers and territories. For example, our group is working both with small wine-growing municipalities, such as Jurançon, which has 7,000 inhabitants, in the context of the positive energy territories contract (Terr’innov), and with the Municipality of Chongqing in China. It is the largest city in the world with 33 million inhabitants. In Beijing, we are working on replacing coal with gas in order to put a halt to particle emissions.

Similarly, the City of Paris, which aims to achieve 100% carbon-free transport, is going to replace 900 diesel buses with engines that run on biogas – methane produced in a renewable manner from the fermentation of agricultural waste.

Energy efficiency also requires developing very high performance hot and cold networks, like in Paris. We have installed the world’s largest cold network there. Instead of doing like with the conventional air-conditioning units we see at the windows of apartments, which consume energy and contribute to heating the atmosphere, we proceed with collective systems. There are five underground cooling plants in Paris. They exchange cold water with the Seine, without exchanging heat with the atmosphere. We heat up the river very slightly, just a tiny bit, and we distribute water at 3 degrees, without using individual systems. The Louvre and large Parisian buildings are connected to this collective system. In China, we do the same thing with the Yangzi Jiang.

Has the energy transition really started?

Yes, the shift towards a new energy world is inevitable. No one can stop it, because of developments in technologies, but also in people’s behavior. The movement is irreversible, because consumers are no longer passive. They want to understand, manage and sometimes produce their energy themselves.

For example, over the past 50 years, we have not experienced a technological revolution in power generation. Today, the cost of wind turbines and solar equipment is falling very rapidly. Solar energy is going to account for a huge part of power generation, thanks to more effective technologies to store energy. Moreover, the digital revolution will have significant consequences on the control and optimization of energy systems.

Is solar energy the solution for tomorrow?

There will not be just one solution, but a mix of solutions. Solar energy will be a major component in this, because of its extraordinary flexibility. Photovoltaic panels can be installed on the roofs of houses, in car parks, on car roofs, on the back of cellphones, on the vertical sides of buildings that will let light through and generate electricity at the same time. ENGIE Group very much believes in it and invests in renewable energies. We are the leader in solar and wind energy in France. We install solar power plants in South Africa and Chile, and in 2014 we built the largest wind farm in Africa, in Tarfaya in Southern Morocco. It has a capacity of 300 MW, which will supply 1.5 million households with green electricity. This farm will avoid the emission of 900,000 tons of CO2 a year.

Does the energy transition offer a market?

Of course! In ENGIE Group, 50,000 people work in the electricity and gas sectors, and 100,000 work on improving energy efficiency. We offer energy expertise and diagnostics to local authorities and companies. For example, we have built a plant which produces the high yield hot and cold fluids required for the entire Airbus factory in Toulouse. We have taken up 15% of the Airbus site to produce heat, cool air, electricity, gas and hot steam. 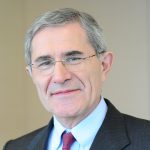 Chairman and CEO of ENGIE