President of the Basketball Africa League

Facebook Twitter Link
Copied to clipboard
Demonstration during the inauguration of a new basketball court in Zenata, Morocco (June 2019) © AFD

What place does basketball hold in Africa?

Basketball is a very popular sport, the second most popular after soccer. Practice of the sport is growing rapidly. The NBA has long been involved in Africa and we opened our first office in Johannesburg (South Africa) in 2010.

Basketball is a powerful tool for development.  It is also an effective means of promoting peace and diplomacy. Sports, and basketball in particular, have the ability to unify and galvanize people, and have a positive impact on society. These aspects are very important for us in creating the Basketball Africa League (BAL).

There is also a well-established NBA tradition of giving back to the community. One example is the former player and great philanthropist Dikembe Mutombo, who built a hospital in the Democratic Republic of the Congo. Other players or former players are investing in agriculture, education, new technologies, entertainment or direct the basketball federation in their country. These actions are all very practical and worthwhile.

How will the creation of a league like this in Africa, with the first games in March 2020, contribute to development?

First of all, it provides talented African players with an opportunity to play at the highest level at home. This talent has been exported too systematically, both in basketball and other areas. Even beyond the sport itself, using basketball as a vector for development, both for individuals and the community, is part of our DNA. In addition to their sports careers, NBA players are therefore supported in their needs for training or career guidance. We seek to train the entire individual.

The programs we are developing in Africa, including the BAL, also meet these criteria. For example, young people who join our NBA Academy Africa receive full scholarships for their studies. They are full-time students and full-time athletes: they learn basic principles for basketball and for life. The BAL is being established on these principles.

You also emphasize the economic aspect of this project. Why is it important to succeed in this area?

It is critical for ensuring the long-term future of the Basketball Africa League. While we believe in the entertainment product, we believe just as much in the impact this league will have on Africa’s sports ecosystem. We want to create a basketball industry that generates jobs, including through infrastructure and sports halls like the Dakar Arena, Kigali Arena and Kilamba Arena (in Angola). A wide range of activities will be developed around these basketball games. The restaurant, hotel, transport, security, media and logistics sectors will also benefit. It is also an opportunity to show another side of Africa.

In your opinion, what are the expectations of African youth in 2020?

The youth of Africa continue to hold on to the courage of their ambitions. They dream big. They have a real sense of responsibility and of duty. The youth have embraced the idea that Africa must first and foremost be developed by Africans, still working with our partners throughout the world, but as equals. Africa is full of innovation. The future prospects are very promising. It is important to have youth who are able to meet the challenges of this promising future.

Soon, the world’s largest cities will be African. The world’s largest population will be here in Africa, and it will be young. Sports can offer an extraordinary tool for accelerating the development of this young generation. They teach discipline, self-confidence, team spirit, and respect for others. We need these character traits to help these young people move forward and create opportunities.

We are also committed to the vision of replicating the best international standards for education and training in Africa. Excellence must come to the youth of Africa. They should not have to go looking for models somewhere else. This is another reason why we are creating BAL, to support this underlying trend. 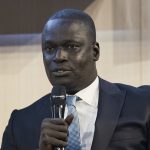 President of the Basketball Africa League