Offering development stakeholders management and leadership training, making banking and digital tools available to them and assisting administrations with their digitalization processes. This is what the pan-African Bank Ecobank does through its Foundation. It supports the establishment and development of aid and development entities in Africa, such as the Global Fund to Fight AIDS, Tuberculosis and Malaria and the Red Cross and Red Crescent National Societies. For the Ivorian Chief Operating Officer of the Ecobank Foundation, Carl Manlan, it involves using the skills which are already in Africa and which can meet the challenges of providing access to the banking system on the continent.

You believe that a private financial institution can cultivate an approach to development that is not only based on financing. What does it involve?

Banking structures generally support local projects by providing either financing or expertise. In 2016, we elaborated a different strategy. It is more about using human skills and making the bank’s technological resources available to development stakeholders than it is about writing checks. For instance, Ecobank has its own Academy, which trains bankers, both in terms of actual banking expertise and in the management and development skills of organizations. The courses on offer also interest NGOs, as they help them acquire know-how in program management, accounting and leadership. For example, since October 2018, 48 national program leaders receiving financing from the Global Fund to Fight AIDS, Tuberculosis and Malaria – one of our main partners – have been trained. In addition, in March 2019, 110 Presidents, Secretary Generals and Youth Leaders from the Red Cross and Red Crescent National Societies in Africa were trained at Ecobank’s Pan-African Center in Lomé, in the context of a training program designed by the Academy based on the issues facing National Societies.

What do development stakeholders find in these training programs, which are originally elaborated for private sector actors?

Take for example managers of National Malaria Control Programs. Their role is to ensure that all the expenditures are properly incurred and comply with procedures. But they are also fundamentally leaders who cannot confine themselves to a role as mere financiers. They are agents of change who contribute to saving human lives. Consequently, they cannot be limited to buying drugs, as their role is not merely to check that the orders are correctly made. They must also understand their place in the healthcare value chain and be aware of the fact that any delay puts lives in jeopardy. By acquiring the key concepts of project management, these financiers are empowered in their positions as program managers.

[display_quote quote=”In Africa, financial inclusion is a major issue and a development challenge. The number of people with a bank account remains very low.”][/display_quote]

And training is not the only thing that development stakeholders and private actors can pool. Banking technologies can also be very useful. Last year, we signed a partnership with the regional delegation of the Red Cross and Red Crescent in Nairobi to work with the National Societies in the countries where Ecobank is present. For example, in Ghana, Ecobank’s digital platform serves to collect donations for the Red Cross and Red Crescent, with the aim of replacing cash collections in the medium term. In Tanzania, we have supported the digitalization of the recruitment process for volunteers. The foundation is at the interface between public and private stakeholders and NGOs. It is positioned more as a link builder than as a financial intermediary. This is precisely what makes this approach worthwhile: private sector and/or financial innovations prove to be useful for all sectors and can serve to benefit people.

Some could argue that Africa’s main development stakeholders should rather be States.

Indeed, States play an undeniable role. A real partnership is based on the skills of those involved. Consequently, the individual plays an essential role in his or her community to allow various stakeholder to fully play their own parts in ensuring that public services in Africa, starting with hospitals and schools, are centers of excellence. This is vital. But if we take the example of schools, education systems are not sufficiently equipped and are not able to ensure a high quality of teaching in several countries. The Ecobank Foundation and Academy choose to provide analytical tools and digital learning platforms for public stakeholders who can achieve excellence with the appropriate tools. The added value of this type of approach, at the crossroads between the private and public sectors, lies in our capacity to work with other organizations, as with the government, to contribute to the digitalization of the administration, for example, to more effectively manage the teaching staff and students enrolled. In addition, we do not only make our digital and banking tools available to organizations, but also our employees. It involves making full use of the skills of our 16,000 employees in 40 countries: they are therefore regularly called on by the Foundation to make a contribution.

What are the links and complementarities between the banking and development sectors?

In Africa, financial inclusion is a major issue and a development challenge. The number of people with a bank account remains very low. The clients which banks seek to include and those which NGOs want to help are therefore the same. Yet Africans often complain about the fact that they do not have access to credit or transaction facilities. If, with NGOs, we target the same people, we can jointly reflect on the harmonization of our approaches. Banking tools can facilitate everyone’s lives, but we cannot ask bankers to become experts in health or education. We need a combination of skills and know-how to allow our countries to make progress and move forward.

In early 2019, you explained in an op-ed that Africa has the means to finance its own development. In your opinion, what are the prerequisites to achieve this?

The African Development Bank estimates that 350 million Africans on the continent have sufficient disposable income to generate a savings capacity, albeit limited. If every African in a position to do so saved one dollar a month, we could mobilize 4.2 billion dollars a year. Unfortunately, despite this potential, no development entity specifically targets Africans with an income and/or the diaspora to ask them to contribute collectively to projects for Africa.

Yet altruism and solidarity are shared values in Africa. Funerals are often self-financed by the community. Few bereaved families end up in debt. What is possible for funerals can also be so for other issues. Local mechanisms can be replicated at the national, regional or continental levels.

In October 2018, the Ethiopian Prime Minister asked the diaspora to set aside one dollar a day for the country. In February 2019, 20 million dollars had been collected. This type of collection is technically possible when everyone has a bank available thanks to their phone. This brings me back to what I was saying about the skills we need to combine: microfinance or digital finance, for example, have fully understood this and are at the crossroads of the banking and development sectors.

Trusted intermediaries could speed up the process in Africa by ensuring the money is properly used. If savers and the diaspora had confidence, we could create dynamics that would settle fundamental problems such as access to water or basic education. Schooling, which could cost as little as 100 dollars a year and per child, could be subject to a citizens’ initiative to support the efforts of States. I believe that many people are willing to pay for this. 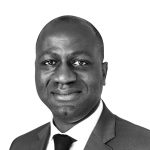