Why climate change is such an important issue for Asia and the Pacific?

Asia and the Pacific continues to experience rapid economic development with the region’s economies posting 5.8% growth in gross domestic product in 2016. The region’s continued growth, growing access to electricity, and rapid expansion of the vehicle fleet will contribute to Asia’s growing share of global greenhouse gases, which could rise to 48% by 2030 under the business-as-usual scenario from approximately 40% in 2016.

However, Asia and the Pacific is also extremely vulnerable to the impacts of climate change. And while it may have the highest overall potential for reducing greenhouse gas (GHG) emissions, it also needs to invest in adapting to climate change.

Under the business-as-usual scenario, a 6o C temperature rise (8o C degrees in some countries) above preindustrial levels is projected for the Asian landmass by the end of the century, leading to drastic changes in the region’s weather system, agricultural and fisheries sectors, land and marine biodiversity, domestic and regional security, trade, urban development, migration, and health. Such a scenario may even pose an existential threat to some countries. Hence, Asia and the Pacific is at the forefront of the battle on climate change, both in terms of its impact and solution.

It is imperative that prioritization is undertaken for the types of investment required both to increase the likelihood of achieving the Paris goals and to protect the region’s most vulnerable inhabitants from the anticipated impacts of climate change, many of which can no longer be avoided. Both must be done at scale, and quickly.

How is ADB contributing to mitigation and adaptation to climate change?

ADB continues to scale-up its operations to more effectively support its developing member countries (DMCs) in meeting the commitments of the Paris Agreement through strategic advice, innovative financing, disseminating knowledge and building partnerships.

In addition to ADB’s own resources, ADB has mobilized $701 million from external resources, the highest since it started tracking its climate finance 6 years ago. In total, $4.4 billion financed climate-oriented projects in 2016. ADB also continues to implement and develop innovative financing schemes such as the use of green bonds, green financing platforms, financial risk management products, and others.

What are the outlines of this new climate change strategy?

Finalized in July 2017, the ADB CCOF2030 aims at enhanced action for low GHG emissions and climate-resilient development of Asia and the Pacific. As a leading development partner of its DMCs through its strengthened public and private climate operations portfolios. This vision is grounded on five fundamental principles:

How has the ADB integrated climate data into its investments?

Since the late 1980s, ADB has been providing support to its developing member countries through technical assistance and knowledge support, and after the ratification of the Kyoto Protocol through its carbon funds.

The emphasis has been growing in recent years. ADB’s Strategy 2020 (launched in 2008) highlights the importance of supporting action on climate change mitigation and adaptation and disaster risk management in DMCs.

In 2010, ADB realigned and redefined its strategic priorities in addressing climate change to provide guidance for all operations.

The five priority areas are:

In addition, an internally resourced Climate Change Fund was established to facilitate operations to integrate climate considerations in the investments. In 2014, ADB mandated climate risk screening for its portfolio of investments and introduced a climate risk management framework.

The launch of the CCOF 2030 signals that ADB is strongly committed and for the long term to building a low carbon and climate resilient Asia Pacific.

How do you ADB works with public and private partners?

Many developing countries require financial assistance and capacity building to bring into motion commitments and related activities made under their NDCs; and the private sector can play a vital role in delivering these efforts.

Through its CCOF2030, ADB will encourage both governments’ and public and private sector’s participation in addressing climate change. ADB’s support to DMCs will be focused on five key actions centered on policy, financing, technology, knowledge and capacity, and partnerships and networks.

ADB’s private sector operations have made a commitment to mobilize climate investments by 2020 to the order of $1 billion from ADB’s own resources. This will of course be contingent upon appropriate policies and regulations and in this context, the complementary role that the Office for Public-Private Partnership will execute, will be crucial.

But money is not everything. Access to technology, capacity enhancements and appropriate institutional mechanisms are equally important. Creating enabling environments and incentives are key to encourage cooperation.

ADB is using various channels to build coalitions—through knowledge partners such as the Potsdam Institute for Climate Impact Research, with UK Met office or through networks such as the Asia Pacific Adaptation Network, the NDC Partnership or through dedicated platforms.

The MDBs have also been very active in building such cooperation amongst themselves; MDBs are working closely on finding solutions.

Do you think that the objectives set by the Paris Agreement can be achieved?

Current efforts are encouraging and scaling-up of various activities including financing are on-going. However, we cannot become complacent as there is still a need to ramp up various activities to meet the goals of the Paris Agreement. UN Environment’s Emissions Gap Report for 2017 warns that with the current pledges we will meet only one third of the emissions reductions required by 2030  to meet the target of temperature increase of below 2 degree centigrade.

In its  Adaptation Gap Report in 2016 reported that the total cost of adapting to climate change in developing countries (including other countries outside Asia) could hit between $280 and $500 billion per year by 2050.

Thus, Asia require massive amount of mitigation and adaptation finance to deal with the challenge of climate change and continued investments in renewable energy, energy efficiency, climate resilient infrastructure, green cities, sustainable transport and climate smart agriculture are needed. There is a need to further engage the private sector in contributing to climate change actions, particularly on adaptation efforts.


There is also a need to maintain momentum, especially when governments are required to renew their NDC commitments every five years; as such a lot will depend on the political will and continuity of efforts at the country level.

Behavioural shifts and consumption patterns need to be modified. In this context, each one of us has a role to play, as for examples using public transportation versus driving our own vehicles, saving energy in our homes, using energy efficient appliances and adopting less consumptive lifestyles. 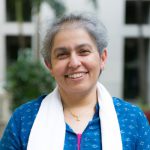