The economy of culture in Africa, which is often overlooked in development plans, could be one of the most dynamic sectors on the continent, if it was supervised. With no organized market or strong political interest, this potential remains largely untapped, according to the Cameroonian economist, Martial Ze Belinga, who lives in Paris.

What does the economy of culture mean in Africa?

Beyond the arbitrary aspect of institutional boundaries and conceptual ambiguities, the economy of culture goes from literary production to shea butter, and includes hair aesthetics (braids), heritage and handicrafts. It does, of course, also include arts and entertainment, fashion, music and audiovisual media – all activities which come up against the question of the institutional, legal and economic recognition of knowledge holders, authors and producers of intellectual works (status, plagiarism, biopiracy…).

The economy of culture, in all its diversity, takes into account everything which is produced by culture in the broad sense of the term, a complex body of knowledge with high added value and export potential. In handicrafts or gastronomy, there are too few African initiatives that are competitive over the long term, like Aïssa Dione’s woven loincloths, in Senegal, which are sold to leading luxury brands such as Hermès. The African masks sold on the sidewalks of New York, or the airport art on the continent, often represent the least qualitative side of what Africa has to offer!

The economy of culture can, however, have real economic weight: in 2008, a European study[1] estimated that cultural activities in Mali accounted for 2.38% of GDP and 5.8% of employment, including 3.8% for art handicrafts.

Is it possible to industrialize a handicraft sector which is still largely informal?

Yes, it is, to a certain extent. Africans have already supplied leaders in international distribution: Wal Mart in the USA or Galeries Lafayette in France. As regards the Djembé sector or Ashanti stools (Ghana), the success often lies in the meeting between professionalized artisans with a minimum academic level and actors with commercial profiles, or with specialized associations such as Aid To Artisans. These synergies are essential in order to go beyond the stage of a subsistence activity. An appropriate legal and administrative framework must provide guarantees with sufficient incentives for actors.

That being said, providing long-term support to a sector where there is strong international competition is not straightforward. Each stage of the value chain must be optimized: market knowledge, structuring of artisans, moving upmarket, training, financing. The fact of having succeeded in having a few large international orders may temporarily give credibility to a range of products. However, in terms of public policies, professionals and entrepreneurs, there is a lack of an overall ambitious and creative strategic intelligence equal to the challenge.

Which countries have understood the importance of the sector?

In South Africa, a Cultural Industries Growth Strategy was implemented by the Department of Trade and Industry back in 1998, under the aegis of Wendy Goldblatt, who founded the Craft Council of South Africa. This sector has also been identified because it could rapidly benefit disadvantaged black populations in the spirit of Black Economic Empowerment (BEE). Today, the network of actors in the African creative economy, Arterial Network, is developing with the support of South Africa.

In Ethiopia, the success of the footwear brand, Sole Rebels, has become a textbook case. Since 1988, Burkina Faso has been organizing the West African International Arts and Crafts Fair (SIAO), a biennial pan-African event which has the merit of having built up a regional reputation, although it should renew itself and become an activity for innovation (fair).

In general, artisans have low levels of education, but have rare forms of endogenous knowledge. There is huge potential in terms of poverty reduction, as the handicrafts sector generates income which benefits very low-income and vulnerable social classes (young people out of school, the unemployed, women, rural dwellers, the disabled). Some of the top Ghanaian handicraft exporters declare up to USD 400,000 of annual income.

The real obstacle for these sectors lies in the capacity to increase volumes without compromising on quality. It is necessary to manage the recruitment of artisans, their training, orders, quality, logistics, cash flow… The lack of familiarity with the basic techniques of international trade increases the risks of quality being crowded out by quantity.

What are the consequences of this situation?

The leading decoration brands in the Northern hemisphere have financed the imitation of African products, as they could not find them in sufficient quantities locally. Adding insult to injury: you can find foreign imitations of African products on African markets, for example, djembés [drums] made in Asia!

The fashion for loincloths and printed textiles has taken on everywhere. Wax fabric is not originally African, but Africa has adopted this textile which historically came from Indonesia via the European colonization. The dynamism of this esthetic style is led by the continent and has now been taken up by Western brands, such as the ready-to-wear house Agnès b., to take but one example, which make imitations of it. How many fashion houses have sold and built a reputation on African artifacts, such as Tuareg jewelry reproduced outside Africa?

What do you recommend to get out of this situation?

Part of the problem lies in the acculturation of African elites, who mainly only aspire to a way of life based on copying the West, and whose mental structures can no longer perceive the local excellence which is right in front of their face. These are acute collective sociological and psychological problems, as part of the intelligentsia sees intelligence as an import product. The status quo will continue to exist for as long as Africa does not give itself the means to produce its confidence in itself, that it does not develop its material and immaterial resources, and continues to wait for a hypothetical development coming from outside, with export rents. Raw materials will continue to drive out cultural materials.

Are we not on the verge of a turning point with the growth of a young and uninhibited Africa which, for example, organizes Black Fashion Weeks on the continent and around the world?

It all depends on the resources that this Africa will be able to mobilize, the knowledge that will be transferred to it, the self-awareness in which it will be immersed, its ability to transgress. Its capacity to criticize, on an endogenous basis, the fashionable discourses on “emergence of Africa” or “Africa, the last growth frontier” will be decisive in restoring hope.

From this perspective, it will be necessary to take a reasonable distance from statistics, which are often static: observing quantitative regularities, such as high growth rates, is extremely insufficient when the latter depend on the world economy, and internal and international power relations, as with the geostrategic choices for supplies of raw materials. Having all the multinational companies in the world on one’s territory does not mean that you yourself will win in the game… It could even be the symptom of economies of predation!

Are these prospects sufficiently discussed in Africa?

We have a colossal task ahead of us from this perspective, as we will not be experiencing the industrialization of the 19th century, due to the depletion of resources. Whether we like it or not, we are in a position of being the repairers of the Earth, not from a moral stance, but because we have no choice, as Africa is home to biodiversity that is second to none in the world.

The old models of industrialization and consumption have damaged our common tool, the planet. We need to find an intelligence and scientific and political imagination in order to face these huge challenges. 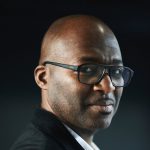